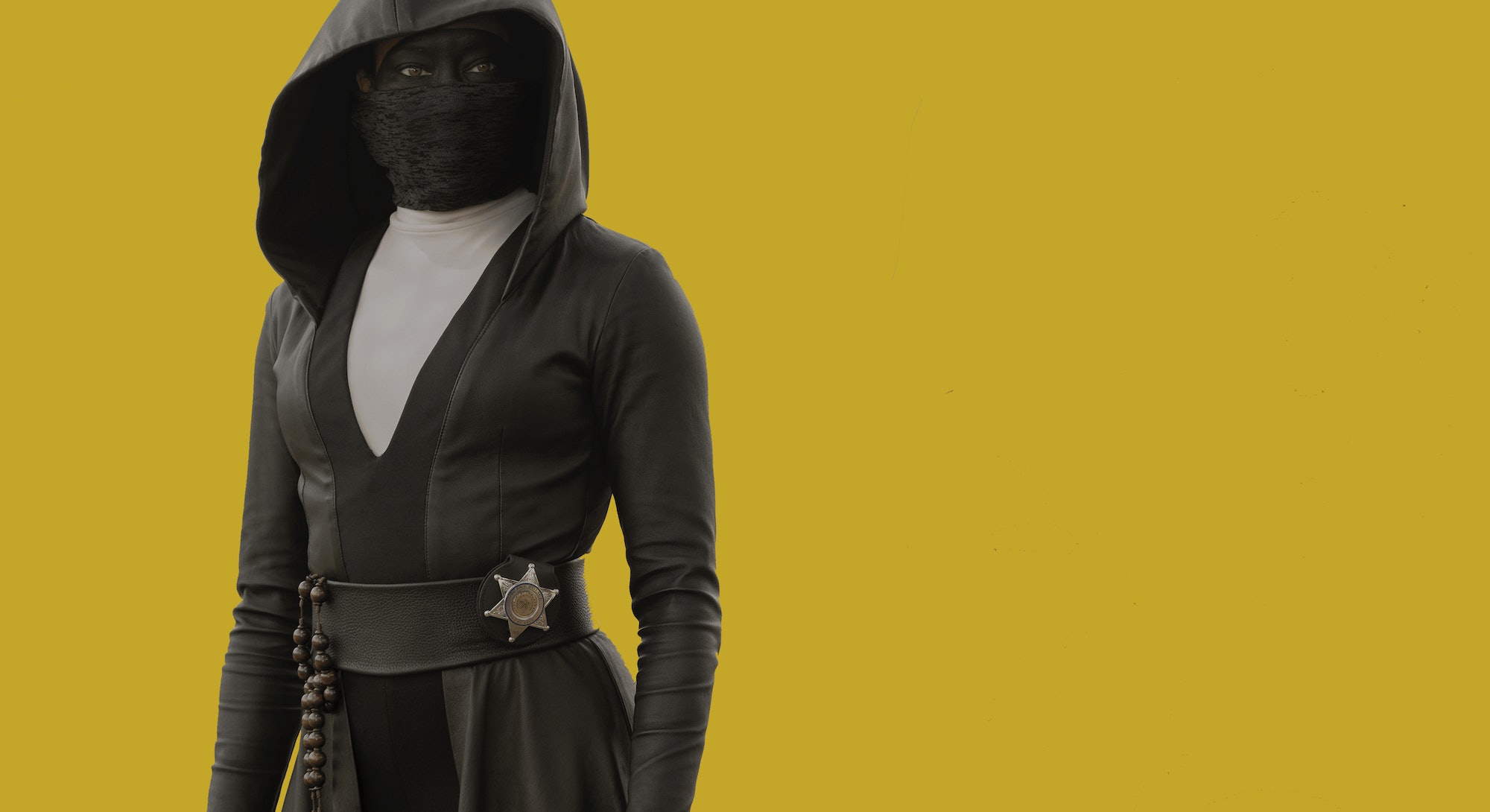 To call Watchmen a story about superheroes is too simple. In both the original Alan Moore/Dave Gibbons comic book and the HBO series, superheroes aren’t benevolent beings who use their powers to rebalance the scales of justice. They’re emotionally scarred people attracted to the rush of vigilantism. Superpowers don’t even exist; the only one to have powers in the comics was Doctor Manhattan, a blue ghost incapable of human emotion.

Damon Lindelof, previously of Lost and The Leftovers, isn’t concerned with superheroes. But he really loves Watchmen. In his impeccably directed, beautifully imagined, and engrossing series, Lindelof’s affections come off the screen as he realizes a modernized, provocative story that lives up to Moore and Gibbons’ legacy. In the same way Moore and Gibbons took superhero tropes and nuked them, so too does Lindelof. Watchmen on HBO looks and feels unlike any other superhero story. In its rebuke of the genre, it is the most faithful adaptation.

Watchmen (Sundays on HBO) asks one big question among many: Who watches the Watchmen? What do accountability, responsibility, and citizenship mean in a world overrun by secret identities? Even Lindelof doesn’t seem to know all the answers, but the journey to find out is part of the show’s appeal.

Set in the same timeline as the comic, Lindelof’s Watchmen is a distant “sequel,” where everything in the original 1980s story happened, but the graphic novels aren’t required reading to follow along with the plot. You will, however, miss a ton of references if you’ve never read it.

The Minutemen, Doctor Manhattan, winning Vietnam, Nixon’s four terms, Rorschach, the giant squid — it’s all canon. Lindelof doesn’t pass over one stone in Moore’s story, and it even revisits some key moments in the series. But unlike Zack Snyder’s film, HBO’s lavish budget and vivid resolution only reveals the gruesome inhumanity of the saga.

Its setting of an alternate 2019 exists as a novelty thought exercise. Q: What if society evolved without internet and smartphones? A: You get Alexa for CD players and steampunk-flying cop cars. With so much time between Moore’s story and Lindelof’s, the show distances itself not as an adaptation, a sequel, or a spinoff, but its own complete entity. We do check in on the surviving Watchmen (most of the show’s central characters are entirely new creations). But despite the dramatic change in time and location, the world is still wrestling with the same grimy, ugly world that Moore’s original story left in its wake.

Far from New York City, Lindelof’s Watchmen finds itself in Tulsa, Oklahoma. Three decades after the Watchmen and the giant squid that killed millions, superheroism is illegal. Unless you’re a cop, it’s illegal to fight crime, but in a twist, the police mask themselves after a domestic terrorist group targeted an event dubbed “White Christmas.”

In this gray area between law enforcement and vigilantism walks Angela Abar (Regina King), a retired Black Tulsa detective who conceals her identity as the masked crime-fighter Sister Night, one of a very select few “superheroes” legally authorized to operate within the police force. There’s also a masked Russian, Red Scare, a punk named Pirate Jenny, and an interrogation expert with a reflective mask of silver, dubbed Looking Glass, who round out this new “Watchmen.” Together, they all pursue the Seventh Cavalry, a cell of white supremacist terrorists who’ve adopted Rorschach’s mask — and his fascist leanings — for their own, who’ve returned with a bang after years of dormancy. Angela embarks on a difficult, dangerous pursuit while she discovers an uncomfortable truth about her family.

Two key characters come directly from the comics: Jean Smart as Laurie Blake, the former Watchman known as the second Silk Spectre and now a maskless federal agent; and Jeremy Irons as Adrian Veidt (aka Ozymandias), the “World’s Smartest Man,” who appears to be in forced isolation after committing genocide. Doctor Manhattan is still lurking on Mars, as uninterested in humanity’s problems as ever.

Watchmen, originally published in 1988, took mainstream comics to task with subversions in both story and technical form. Where Marvel and DC artists played on the page, stretching subjects beyond incomprehensible panel space, Watchmen followed a rigid nine-panel grid nearly all the way through. Where Marvel and DC characters fit a certain mold, Watchmen broke that mold and reshaped it into a neo-conceptual art piece. And where Marvel and DC only ever echo the political temperature, Watchmen was a blaring siren of urgency. The book came out in the ‘80s, when America was in the final years of the Cold War, facing the lingering threat of nuclear annihilation. Watchmen was a superhero comic where everything ended in a blinding white light with millions dead.

HBO’s Watchmen does as much as the original comic in subverting its genre. Lindelof eschews the chaotic good bombast of Arrow and The Flash while one-upping pinnacles like Daredevil with meticulously choreographed, realistic fight scenes. The ninja moves found in Zack Snyder’s 2009 movie — a three-hour, $130-million-dollar exercise in missing the point — are not in Lindelof’s series.

A different issue from the Cold War takes center stage in Lindelof’s Watchmen, and with no lost urgency. It’s not nukes that will destroy us, Lindelof argues, but racial prejudice. As if speaking through Watchmen, he proposes that the emboldened visibility of white nationalism in our real world is what will destroy us in greater numbers than giant monsters.

Racial tensions underscore every beat of 2019’s Watchmen. In Tulsa, it’s the ghosts of the 1921 riots — when white mobs burned down wealthy Black-owned businesses — that haunt its inhabitants more than a giant psychic squid. (Episode 5 is all about that squid, though.) But Watchmen doesn’t do anything cheaply. There’s no Trump analogue or reworked MAGA language, but the violent Charlottesville protest and other incidents of the past three years inform Watchmen’s own repressed trauma.

It’s fair to be skeptical of what Lindelof — a white guy from Teaneck, New Jersey, with an enviable Hollywood career — has to say about race. The first episode even begins slightly tone-deaf in its depiction of a seemingly progressive, race-blind police force hell-bent on destroying white terrorism as the authorities raid a trailer park called Nixonville. There’s enough twists throughout the season, though, that the layers start to peel away like the old skin of a snake. These cops are definitely not the heroes the first episode makes them out to be.

Damon Lindelof and Regina King on the set of Watchmen

Watchmen is the best new series of 2019, bar none. Anchored by an alluring Regina King, the series is unhampered by Lindelof’s worst storytelling habits — that of slow, methodical unraveling of complex ideas. For most of 2019, it seemed that The Boys would take the title for “Most Subversive Superhero Series” (and a hearty shout-out to anyone who knows that the real alt-superhero show of the year was the criminally underwatched Doom Patrol). But all debate is moot, because the undisputed champion is now Watchmen.

Lindelof likens his effort to the New Testament, and the original comics to be the Old Testament. Such Biblical allusions speak to his profound worship of the story and his serious approach to the material. In comics, the word of the author is often equal to the word of God. Filmmakers regularly pay lip service to creators in press interviews to curry favor among the target audience who’ve collected every issue.

But stories aren’t carved in stone. They’re cathedrals built over generations. With Watchmen and its subversive ideal of superheroes — the gods who live among men — Lindelof dares to present a bold idea no fan wants to acknowledge: God is fallible.