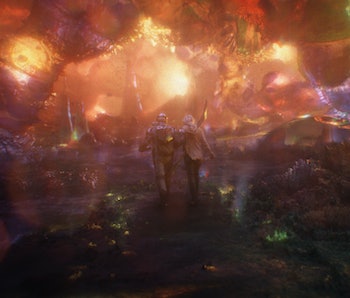 Ant-Man and the Wasp: Quantumania promises to explore the Quantum Realm more deeply than any Marvel Cinematic Universe film before it.

That’s not totally surprising, given the fact that the first two Ant-Man films both deal heavily with this psychedelic, reality-defying dimension. In that way, Quantumania feels like it’ll organically follow the path laid out by its predecessors.

However, the presence of Jonathan Majors’ Kang the Conqueror in Quantumania suggests that the film’s exploration of the Quantum Realm could prove far more dangerous — and disastrous — than fans might have previously expected it to be. Meanwhile, a new sneak peek at the film positions it as one of the weirdest and wildest films that Marvel Studios has ever released.

The World’s Weirdest Font — A recent behind-the-scenes photo from the Ant-Man and the Wasp: Quantumania set has been making waves online this week. Why? Because it reveals a brand new logo for the highly-anticipated Marvel sequel; to say it’s weird would be a massive understatement.

Indeed, the logo spells out the Quantumania part of the film’s title using a font no other Marvel film has used before, and that, frankly, makes it nearly impossible to read. It’s an intentional choice, one that TikTok user @vagabondagebabe speculates may be a reference to real-life science.

Specifically, the TikTok user argues that the logo’s Quantumania font may be a reference to the images captured using bubble chambers during the early days of subatomic particle research. If true, the new logo could very well be yet another hint at just how deeply Quantumania is planning on exploring the Quantum Realm, which exists on a subatomic level.

Check out the full theory for yourself below:

Going Subatomic — We’ve known for a while now — ever since the film’s title was announced — that Ant-Man and the Wasp: Quantumania is going to deal heavily in the Quantum Realm. Consequently, it isn’t all that surprising that the film’s new, on-set logo may be a reference to real-life, subatomic research. The logo does, however, just further set up Quantumania to be one of Marvel’s most mind-bending titles to date.

From a design standpoint alone, the logo is weird. And if Ant-Man and the Wasp: Quantumania is truly going to get as zany as its new logo suggests, that can only be the result of it diving headfirst into Quantum Realm madness — or mania, as the title teases.

Of course, it’s still unclear just how the film’s Quantum Realm plot will play out, or how its central team’s adventures lead to them crossing paths with Kang. Regardless, it’s looking likely that Quantumania will reveal corners of the Quantum Realm that have the power to totally redefine the way viewers currently think about the dimension.

The Inverse Verdict — Most comic book readers expect Ant-Man and the Wasp: Quantumania to be one of the more important titles in Marvel’s Phase Four lineup. However, most of the film’s presumed importance has to do with its inclusion of Majors’ Kang, who many believe will be the MCU’s new Thanos-level villain.

But it should be noted that Marvel is currently in the midst of expanding the MCU more aggressively than it has in years, with the creation of the multiverse in Loki and Eternals set to bring powerful beings like the Celestials into the spotlight.

For its part, Ant-Man and the Wasp: Quantumania has the potential to establish the Quantum Realm as another extremely important branch of the MCU — one filled with powerful and potentially reality-altering secrets. At the very least, that’s what the film’s new, mind-bending logo seems to say.