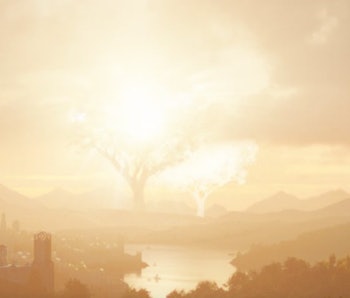 Lord of the Rings fans are excited about the first image from Amazon’s highly anticipated prequel series. It’s not just that said image marks the first glimpse they’ve gotten of the TV series. Much of the fan unrest around Amazon’s reveal had to do with two very tall, very bright trees shining in the background.

Seeing those two trees — named Telperion and Laurelin — is a massive deal to Lord of the Rings fans. Why? Because they’re the sources of light that defined a literal age of Middle-earth, and their presence in the image tells us exciting things about the scope of Amazon’s Lord of the Rings series.

A Brief History of the World — Before we talk too much about Telperion and Laurelin — also known as the Two Trees of Valinor — it’s essential to understand that the history of Arda (i.e. Tolkien’s Earth) — and the entire world in which the Lord of the Rings story takes place — is split into four eras. They are:

Amazon’s Lord of the Rings series will take place primarily during the Second Age, during which — among other things — the Rings of Power are first forged and the great island kingdom of Númenor is destroyed. However, the series’ first image suggests it will also feature scenes set during the Years of the Trees, as Telperion and Laurelin are still standing and producing light.

The Years of the Trees — A lot happens during the Years of the Trees, including a war between the Valar and Melkor over the protection of the Elves and the crafting of the Silmarils, three gems containing light captured from Telperion and Laurelin. (These led to serious strife for both their creator and his people.)

It’s an age of reasonably epic conflict, and its events set the stage for the War of Wrath in the First Age, which culminates with the imprisonment/banishment of Morgoth. The inclusion of scenes set in the Years of the Trees, therefore, presents the possibility of Amazon one day making a Lord of the Rings project about the War of Wrath — or any of the other pre-Second Age conflicts and events that fans have long wanted to see brought to life on screen.

The Inverse Analysis — Amazon is being extra-secretive about its Lord of the Rings series, making predicting what events and characters it will focus on rather tricky. As we remain in the dark about what the series will depict from the Years of the Trees, the fact it shows anything from that era means Amazon may adapt events from every other significant age of Arda.