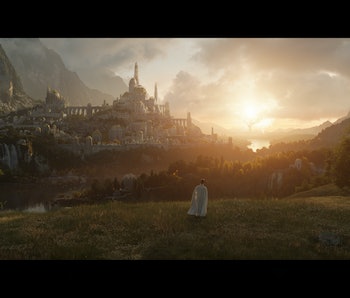 It may have been 17 years since the last release of a flagship Lord of The Rings movie, but the mystical land of Middle Earth is returning in a way we've never seen before — prestige TV. After much hype, it finally looks like Amazon's Lord of the Rings series is coming soon. The series is a prequel, even taking place before the events of the original Tolkein prequel, The Hobbit.

Originally announced in fall 2017 when Amazon outbid other streaming giants like Netflix to the tune of $250 million for a five-season commitment, the series is being developed by JD Payne and Patrick McKay, who were announced as showrunners in July 2018. Now, more than three years after the initial announcement, the cast and crew for this epic series is finally starting to form, and it looks like one of the most ambitious television series in history. Here's everything we know about the upcoming series.

When is the release date for Amazon's Lord of the Rings show?

Amazon Studios announced their yet-to-be-titled Lord of the Rings series will premiere on Friday, September 2, 2022 on Prime Video. It will be available in more than 240 countries and territories worldwide, with new episodes available weekly.

The release date was officially announced on the same day that Season One completed filming in New Zealand.

The 2022 premiere date comes as a surprise after Amazon Studios’ head Jennifer Salke had revealed in a June 2018 interview with The Hollywood Reporter that the studio was targeting a release date for the series in 2021. Initial production for the series began in New Zealand in February 2020, but was halted a mere month later due to the Covid-19 pandemic. Fortunately, the delay only lasted until late September, and production resumed and was completed in August 2021.

When does Amazon's Lord of the Rings show take place?

Early rumors about the series labeled this show a "Young Aragorn" series following the ranger known as Strider who was eventually revealed to be king in Return of the King. It's unknown how accurate those rumors were, but a March 2019 tweet from the show's official Twitter account confirmed that this was not the case. The show would instead be set in the Second Age of Middle-earth, a crucial time in the world's history, unlike anything we've seen before.

For perspective, the Second Age ended when Aragorn's ancestor Isildur defeated Sauron for the first time and claimed the One Ring, as depicted in a flashback sequence from Peter Jackson's films. The events presented in The Hobbit happen almost 3000 years later, and The Lord of the Rings happens 60 years after that. (LOTR Project has a great timeline for Middle-earth's history, should you need it.)

Tolkien scholar Tom Shippey, who's consulting on the Amazon series, confirmed in an interview with The German Tolkien Society that the First and Third ages of Middle-earth were "off-limits" for the series and that the broad strokes of the Second Age would not be altered. So what actually happens in this era?

"The Tolkien estate will insist that the main shape of the Second Age is not altered," Shippey said. "Sauron invades Eriador, is forced back by a Númenorean expedition, returns to Númenor. There he corrupts the Númenoreans and seduces them to break the ban of the Valar. All this, the course of history, must remain the same."

The show might include some of these important events but will presumably tell stories about the residents of Middle-earth experiencing them on a more intimate level. Might events happen in a quieter time before Sauron's rise to power? Will the show occur when Sauron creates the Rings of Power? Or will it focus on the war leading to his demise? All of these are possible.

What's the plot of Amazon's Lord of the Rings show?

While the plot still remains shrouded in mystery, fansite TheOneRing.net obtained what they claim is the synopsis of the upcoming series:

"Amazon Studios’ forthcoming series brings to screens for the very first time the heroic legends of the fabled Second Age of Middle-earth’s history. This epic drama is set thousands of years before the events of J.R.R. Tolkien’s The Hobbit and The Lord of the Rings, and will take viewers back to an era in which great powers were forged, kingdoms rose to glory and fell to ruin, unlikely heroes were tested, hope hung by the finest of threads, and the greatest villain that ever flowed from Tolkien’s pen threatened to cover all the world in darkness. Beginning in a time of relative peace, the series follows an ensemble cast of characters, both familiar and new, as they confront the long-feared re-emergence of evil to Middle-earth. From the darkest depths of the Misty Mountains, to the majestic forests of the elf-capital of Lindon, to the breathtaking island kingdom of Númenor, to the furthest reaches of the map, these kingdoms and characters will carve out legacies that live on long after they are gone."

While this synopsis is yet to be confirmed by Amazon, it does mesh with the epic, sprawling series the streaming platform has been teasing for months. While there's nothing in it about specific plot details, there's plenty to be excited for in future.

Who's in the cast of Amazon's Lord of the Rings show?

Actor Will Poulter had been cast in a leading role in the series in September 2019 but exited due to scheduling conflicts in December 2019. He was replaced in January 2020 by Robert Aramayo, who played young Ned Stark in some Game of Thrones flashback sequences. He'll play a "young hero" called Beldor at the focus of the series.

Variety reported in October 2019 that actress Markella Kavenagh had been cast in the role of Tyra with no other details. Deadline later reported that actress Morfydd Clark would play "young Galadriel," the elf queen portrayed by Cate Blanchett in Peter Jackson's movies. Clark was later confirmed for the series, but Amazon has yet to reveal what character she's playing. Deadline also reported that Joseph Mawle, who played Benjen Stark in Game of Thrones, would play the series' lead villain, Oren.

With such a large cast, it's sure to be just as sweeping an adventure as the original films. There will be just as many knights too — the movies had Sir Ian McKellen, and the new series includes British comedy legend Sir Lenny Henry.

Will any other Lord of the Rings characters appear in Amazon's show?

Outside of a few immortal elves born in the Second Age or earlier, not many familiar characters exist yet at the time the show takes place.

Even Gandalf, who's a kind of angelic spirit called a Maiar or Istari, didn't arrive in Middle-earth until the Third Age. The kingdoms of Men and Elves didn't even discover that hobbits existed until the Third Age, which means that Amazon's Lord of the Rings show might not have hobbits or wizards. In other words, it's likely that the show will only depict men, elves, dwarves, orcs, and Sauron's growing influence in Mordor.

Elven royalty like Galadriel and Elrond are alive throughout the entirety of the Second Age, but we have no way of knowing what role they might play in the events depicted or if they'll show up at all. Hugo Weaving or Cate Blanchett could conceivably reprise their roles as Elrond and Galadriel, respectively, but it's unclear if Amazon's series will even exist in the same cinematic universe, so to speak, as Peter Jackson's films.

How many seasons will Amazon's Lord of the Rings series have?

When The Hollywood Reporter reported on the series announcement in November 2017, the rumor was that the original deal was for five seasons and the potential for a spin-off series as well. By November 2019, Deadline reported that Amazon confirmed an early Season 2 renewal just as pre-production went underway in New Zealand. It's unclear if five seasons is the official number, but either way, Amazon has to formally approve each new season.

Who's working on Amazon's Lord of the Rings series?

In addition to showrunners J.D. Payne and Patrick McKay, the upcoming series has a strong lineup of talent in their writers' room. J.A. Bayona, perhaps best-known as the director of Jurassic World: Fallen Kingdom, will direct Episodes 1 and 2.

Amazon's Lord of the Rings series will premiere on Amazon Prime in 2021.