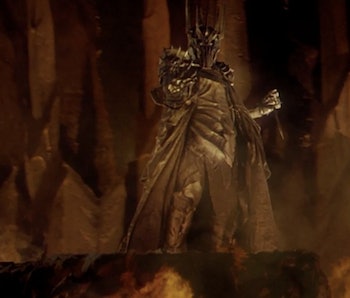 Amazon’s Lord of the Rings series will show fans of J.R.R. Tolkien many sights from Middle-earth that have never before been depicted on screen.

However, Amazon’s recent unveiling of the first image from the series reveals just how much freedom its writers have to explore the history of Tolkien’s world in a way that no other adaptation of the author’s work has before.

Seemingly set sometime before the First Age of Middle-earth, when the Two Trees of Valinor were still shining, that image got fans thinking. If Amazon’s Lord of the Rings will reach that far into Middle-earth’s history, it could introduce a villain who ranks among Tolkien’s finest creations.

The Years of the Trees — Most current theories surrounding the first image from Amazon’s Lord of the Rings series argue that the scene depicted is part of a long-rumored prologue sequence, which will open the series. These theories go on to suggest that the city seen in the image is Tirion, a city in Valinor, with the Two Trees of Valinor (Laurelin and Telperion) standing proudly in the distance.

Fans are still debating the identity of the cloaked figure foregrounded in the image, but everyone seems to be in agreement that those are definitely the Two Trees, which means the scene takes place prior to their destruction — and therefore, prior to the start of the First Age of Middle-earth.

This also means that the series’ rumored prologue sequence could include a depiction of Morgoth, the villain responsible for the Two Trees’ ultimate destruction.

Morgoth & The Two Trees — For those less familiar with the books, Morgoth is basically Tolkien’s original Sauron. First known as Melkor, he’s essentially a divine being turned evil and the fundamental source of all the darkness within Tolkien’s world. He relentlessly waged war against forces of good in the world, in hopes of corrupting everything and bending it to his will. Sauron was one of Morgoth’s servants, and the pair committed many heinous acts together throughout the Years of the Lamps, Years of the Trees, and the First Age.

However, one of Morgoth’s most notable acts was plotting and carrying out the destruction of the Two Trees of Valinor. Seeking to rid the world of their light, Morgoth — then known as Melkor — recruited the giant, dark spider known as Ungoliant (who also happens to be an ancestor of Shelob) to destroy the trees with him.

Together, he and Ungoliant snuck through Valinor until they arrived at the trees. Melkor proceeded to strike them and had Ungoliant devour the sap that spilled out of both trees, draining them of their life and light and poisoning them in the process. The last flower and fruit to fall from the trees went on to become the Moon and the Sun.

The Inverse Analysis — By releasing an image from a scene set during the Years of the Trees, Amazon seemed to be signaling to fans that its Lord of the Rings TV series will depict some pre-Second Age events, ones that fans previously thought couldn’t be showcased. With that in mind, it’s difficult to imagine the series would go out of its way to depict the Two Trees of Valinor without also showing their destruction.

In other words, Lord of the Rings fans may want to prepare themselves for both Morgoth and Ungoliant to appear in some form in the series. A few months ago that would have seemed like a crazy idea, but now? Not so much.

More like this
Entertainment
5.13.2022 10:00 AM
Upload renewed for Season 3. How much longer can Amazon’s best show last?
By Eric Francisco
Entertainment
5.13.2022 12:30 PM
How Chinese and Korean Dramas invented a new time-travel approach
By Taiwo Balogun
Culture
5.12.2022 11:30 AM
You need to watch this genre-warping time-loop anime on HBO Max
By Mónica Marie Zorrilla
Related Tags
Share: