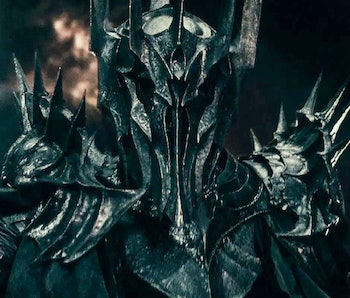 Amazon’s Lord of the Rings series may have a few surprises in store. While the streaming giant has released few details about the upcoming live-action series right now, what we do know hints toward a very different story than the Peter Jackson film trilogy. Virtually none of the characters from the Lord of the Rings movies are expected to appear in the Amazon series, and those who do may not be immediately recognizable. That includes the big bad himself — Sauron.

There's some compelling evidence to suggest the series will follow Sauron before he became the all-powerful warlord shown briefly in Peter Jackson’s Lord of the Rings films. Let's dive in.

The Theory — Amazon has revealed the upcoming series will take place during the Second Age of Middle-earth. The Second Age lasted for over 3,000 years and essentially ended when Isildur cut the Ring from Sauron’s finger. That means the series could, conceivably, tell a lot of different stories. (For context, Frodo’s journey and the entire War of the Ring takes place in the Third Age.)

However, the show’s official synopsis states the series will take place when “the greatest villain that ever flowed from Tolkien’s pen threatened to cover all the world in darkness.” And to many Lord of the Rings fans, that means the series will depict Sauron when he was appearing in his “fair form” and called himself Annatar, the Lord of Gifts.

Meet Annatar — Annatar was a form Sauron took up when he attempted to seduce and corrupt the Elves. He managed to trick many of the Elven smiths, and “helped” (i.e. tricked) them into creating 19 Rings of Power (three for the Elves, seven for the Dwarves, and nine for Men), all while he himself was forging the One Ring in secret. His plan was to use the power of the One Ring to rule over all the other Rings of Power — essentially giving him power over all of Middle-earth through the various ringbearers.

Sauron’s plan went awry when he put on the One Ring for the first time — alerting the Elves to who he truly was and what his intentions really were. They responded by hiding their Rings, which led to an open war between the Elves and Sauron. The Elves managed to keep their three rings from him, but the Dwarves and the Men did not. The Dwarves were more or less unaffected by Sauron’s influence — though the rings did fill them with an insatiable desire for gold — but the nine men were all easily corrupted and became the Nazgûl/Ringwraiths.

The Inverse Analysis — Peter Jackson’s Lord of the Rings films cast a large shadow over all other Tolkien adaptations (including Jackson’s own Hobbit trilogy). That means Amazon’s Lord of the Rings series will not only have to recapture the same kind of epic magic that those three films did, but it will also have to find ways to differentiate itself from them. Letting viewers watch Sauron manipulate and scheme as Annatar (think something akin to Littlefinger in Game of Thrones) would undoubtedly be an effective way of still making the villain menacing — without depicting him in the same manner that Jackson’s films did.