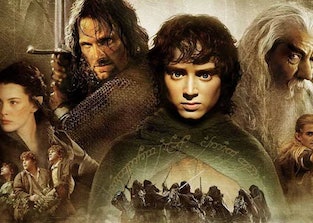 'Lord of the Rings' theories: 5 mind-blowing takes on the movies and books

Lord of the Rings fans love to theorize. It’s not hard to see why either, given just how dense and layered both Tolkien’s Lord of the Rings novels and Peter Jackson’s live-action film adaptations are. Lord of the Rings fan theories aren't just fun to think about after your latest trilogy rewatch, they have the power to reshape the way we look at specific characters and even major events.

So, in honor of all the Lord of the Rings fans and theorists out there, here are five LotR fan theories that you should think about the next time you reread the books or rewatch the films.

5. Gandalf always wanted to use the eagles

Every Lord of the Rings fan has, at some point or another, talked about the eagles. The creatures are instrumental in the trilogy’s events, not only saving Gandalf in Fellowship of the Ring but also saving Frodo and Sam from the collapsing Mount Doom at the end of Return of the King. However, their usefulness and ability to seemingly pop up anywhere has led many Lord of the Rings fans to question why Gandalf and didn’t use the Eagles more often. In fact, why didn’t Gandalf and the Eagles fly Frodo directly to Mount Doom so he could just airdrop the Ring into the volcano, to begin with?

Well, one popular Lord of the Rings theory argues — quite convincingly — that it was Gandalf’s initial plan to do exactly that.

The theory comes courtesy of Redditor u/VulcanDeathGrip, who suggests Gandalf was secretly trying to lead the Fellowship to the Eagles’ home in the Misty Mountains all along but was thwarted by Saruman along the way, who forced Gandalf and the Fellowship into the Mines of Moria where the grey wizard met his (short) end thanks to the Balrog.

The redditor even goes so far as to say that Gandalf’s parting words to the group — “Fly, you fools!” — aren’t just him urging his compatriots to flee Moria but to go to the Misty Mountains and ride the Eagles to Mount Doom. Of all the Lord of the Rings fan theories floating around online, this is one of the most believable. Even better, it could finally put to rest one of our biggest nitpicks with the series.

This interesting theory paints Frodo and Gollum’s relationship in an entirely new, even darker light. Redditor u/SnakeyesX posits that Frodo’s parents, Drogo and Primula, were killed by none other than Gollum when Frodo was just 12 years old.

The redditor believes that Frodo’s parents were drowned by Gollum on the Brandywine River as a result of his years-long search for Bilbo following the events of The Hobbit. The redditor argues that, since Gollum had two clues (“Baggins” and “Shire”) to go on during his search, it’s entirely possible that he mistook Frodo’s parents for being Bilbo and Bilbo’s wife. It would make sense then if Gollum killed them in an attempt to not only get revenge on Bilbo but also to reclaim the Ring.

Before you get too excited, there's plenty going against this Lord of the Rings theory. Notably, Gandalf says in the books that Gollum never made it to the Shire during his search for Bilbo, though Gandalf could be wrong (or lying). The timeline in the books doesn’t quite work out either, since it’s believed that Gollum was elsewhere when Frodo’s parents died. However, it’s an interesting possibility to consider, especially when thinking about the already fateful nature of Frodo and Gollum’s relationship.

3. The Hobbit trilogy's length and style

But one fan believes that the oversized, scattered feel of The Hobbit films was actually intentional. The redditor argues that The Hobbit trilogy is too long and too ridiculous because they are reflections of Bilbo’s skewed, hyperbolic retellings of his own adventures. Whereas Frodo felt no need to blow the adventures of Lord of the Rings out of proportion, Bilbo delighted in telling and retelling his stories to captive hobbit audiences for years. It’s highly likely that, somewhere along the way, he may have begun exaggerating the details of certain battles and encounters. After all, he was quite the showman.

Of course, there’s already plenty of proof that the problems with The Hobbit trilogy were caused by behind-the-scenes issues and some major studio mishandlings. Still, this theory does offer a fun new lens to watch The Hobbit.

In The Fellowship of the Ring, when Galadriel is giving out her parting gifts to the Fellowship, Gimli asks that his gift be a strand of her own hair. Galadriel gives him three. On the surface, this seems like an odd gift not only for Gimli to ask for but also for Galadriel to give. However, one popular Lord of the Rings theory reveals some important backstory to this exchange, which gives it more depth and importance.

The theory references a prideful Elf character from the First Age of Middle Earth named Fëanor, who was said to have asked that Galadriel give him a strand of her hair not just once, but three times. She turned him down every time, deeming him unworthy of such a gift. Years later, when Gimli asked for just one strand, Galadriel gave him three. This means that Galadriel knew that Gimli, a dwarf, was more worthy of such a gift than Fëanor. It also means that Galadriel likely knew about the bond that would grow between Gimli and the Elves throughout the Lord of the Rings trilogy.

1. "Gollum" is a personality inside the ring

This theory comes courtesy of Redditor u/HenceFourth, who suggests that the Gollum side of Smeagol’s split personality is actually a manifestation of the Ring itself. The theory argues that since Bilbo, like Smeagol, is shown calling the Ring his “precious,” “Gollum” may actually be an entity within the ring that torments and twists the minds of whoever holds onto it for a sustained period of time. In other words, “Gollum” could just be the name for a presence that exists within the ring.

This is a fun theory and one that makes the Ring seem like even more of a parasitic, malevolent force than it already did. Although, given how Tolkien described the Ring in the books as being infused with part of Sauron’s own soul, it seems more likely than not that Gollum really is just the split personality or twisted version of Smeagol that developed as a result of his many years with the Ring. Either that, or "Gollum" is just another name for the Dark Lord.