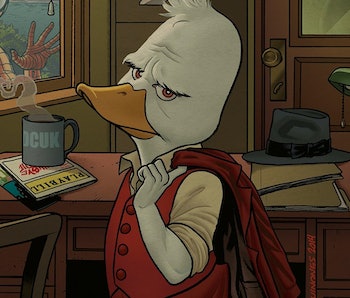 The duck has run amok. As Disney-owned Marvel grows estranged from Netflix, the powerhouse studio is getting mighty cozy with Netflix competitor Hulu. And at one point, it was bringing one unlikely hero — a wisecracking duck — to the streaming service.

In 2019, Marvel announced a new interconnected animated franchise that lampoons the ambitions of the Marvel/Netflix shows. Along with Marvel’s Tigra & Dazzler, Hit-Monkey, and M.O.D.O.K., there would also be Howard the Duck, an animated series and the fourth piece in a comedic crossover that will create Marvel’s The Offenders.

Unfortunately, The Offenders project was canceled, along with Howard the Duck. But here’s everything we know about what the series would have been.

Who was producing Howard the Duck?

Smith is a notable hire as an outspoken fan of all things comic books and whose professional history with Marvel goes back to writing Daredevil for its Marvel Knights imprint in the early 2000s.

When was Howard the Duck going to premiere?

Howard the Duck did not have a premiere date by the project’s cancellation.

Who was in the cast of Howard the Duck?

A cast for Howard the Duck had not been revealed by the project’s cancellation.

I’m sorry, wait. Who the f—k is Howard the Duck?

For fans of Marvel who have only engaged with the films and TV shows, you might be forgiven for not knowing who Howard the Duck is. And the less said about the 1986 movie produced by George freaking Lucas, the better.

"Howard may actually be one of the most important characters in Marvel history."

But Howard may actually be one of the most important characters in Marvel history. Introduced in 1973 by the late Steve Gerber (he died in 2008) and illustrator Val Mayerik, Howard the Duck is a sarcastic, anthropomorphic duck from an Earth-like planet, Duckworld, who initially appeared as a supporting character in Marvel’s horror comic Adventure Into Fear.

After appearing in backup stories for Man-Thing, where Howard’s biting humor contrasted well with the book’s dark tone, readers grew to love HTD. His popularity prompted his own series, Howard the Duck, in 1976.

Known for its unique brand of humor that crossed self-awareness with appropriate profanity (imagine a smarter South Park but somehow for kids), Marvel’s Howard the Duck was a welcome change of pace from the self-serious superhero books featuring the Avengers and X-Men. And through humor, the book was sometimes melancholic, carrying an existentialist point of view that felt sobering in a universe packed with superheroes.

As Nathan Cabaniss wrote for Birth.Movies.Death. in 2014, the book wasn’t just an “angry” screed for Steve Gerber to vent his frustrations with 1970s America. Rather, it was “an amazing, shotgun blast of satire aimed at the comics industry and popular culture at large, equally as funny as it was revolutionary” with a heart that was “a deep, almost melancholic existentialism which plumbed the depths of existence and what it meant to be alive in the world at that time.”

In a 2008 piece Grady Hendrix wrote for Slate, “one issue was all text; another took place entirely on a long bus trip. These were surreal flights of fancy with razor-tipped wings, America’s answer to Monty Python’s Flying Circus.”

Perhaps Howard the Duck as a character is best summed up in Howard the Duck #3, which parodies Marvel’s Shang-Chi series Master of Kung Fu (one of the bestselling titles Marvel had at the time). In the comic, as Howard rants against pop culture’s glorification of violence after seeing a martial arts movie, Howard’s human girlfriend, Beverly Switzler, tells him: “Somehow I never pegged you as an intellectual, Ducky.”

In another story, Howard the Duck #7 and #8, Howard is elected president by the “All-Night Party.” This actually led to at least a thousand write-in votes for Howard the Duck during the 1976 race between Gerald Ford and Jimmy Carter.

The history of Howard the Duck isn’t all roses and revolution, though. Gerber is one of many creators in the history of comics who felt they never got their due and eventually took Marvel to court. The settlements between Gerber and Marvel have never been made public, and Gerber did return to write for Marvel on a number of occasions, including writing a short-lived Howard the Duck revival for its adult-oriented Marvel MAX imprint.

But in a brilliant coup de grâce that thumbed Marvel in its nose (though it was signed off by editor Tom Brevoort), Gerber revealed in an unofficial crossover between issues of Marvel’s Spider-Man Team-Up #5 and his own series at competing publisher Image (starring a new creation, Destroyer Duck) that an imposter clone Howard the Duck was left behind with Spider-Man, and that the real Howard the Duck is now Gerber’s to keep, forever.

Legally, that’s not how things work. But creatively, the switcheroo represents the ingenuity of a creator who is as clever and cunning as his creations.

Why was Howard the Duck canceled?

Initially, Howard the Duck was part of a four-series animation deal between Marvel Studios and Hulu. That slate also included Tigra & Dazzler, Hit-Monkey, and M.O.D.O.K., with all four teaming up in a crossover special for The Offenders. However, almost a year after the announcement, in January 2020, The Hollywood Reporter announced that Howard the Duck was being scrapped while still in development.

Were any other Marvel/Hulu series canceled besides Howard the Duck?

Yes! Tigra & Dazzler also did not survive to see the light of day. That series saw considerably more drama than Howard the Duck. In December 2019, its entire writing staff was let go amidst creative differences. The show was searching for a new showrunner at the time of its cancellation.

The other two intended projects, though, are still a go. M.O.D.O.K. and Hit-Monkey are still being worked on, with the former set to air its ten-episode season on May 21, 2021.

There is no release date for Howard the Duck on Hulu.