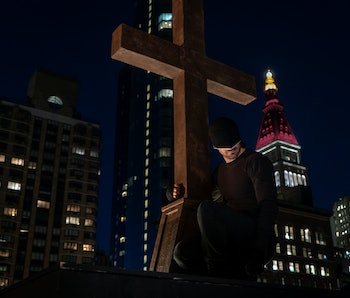 This article about Season 3 of the superhero drama Daredevil was originally published on September 26, 2018 and updated on April 18, 2021 following the release of the season on Netflix. Read on for the original article, with some new changes to reflect the latest updates on this topic.

It’s time to return to Hell’s Kitchen. Season 3 of Marvel’s Daredevil, the show that kickstarted the Marvel/Netflix universe, premiered on the juggernaut streaming giant. Set after the events of the crossover series The Defenders, the new season picks up with Matt Murdock (reprised by Charlie Cox) in a rebirth of his vigilante duties.

Here’s everything you need to know to about the third (and ultimately final) season.

When was the Daredevil Season 3 release date?

What happened in Daredevil Season 2 and in The Defenders?

The last time Daredevil had a season, it was in the spring of 2016, and Matt Murdock was locked in a physical, and mental, battle against Frank Castle, AKA The Punisher (played by Jon Bernthal). Daredevil’s former flame, Elektra (Elodie Yung), also made her debut, and all the while Daredevil prevented a total takeover of Hell’s Kitchen by the mysterious ninja clan, the Hand.

In The Defenders, the Hand’s efforts to take over all of New York City were put into motion, forcing a team-up with Luke Cage (Mike Colter), Jessica Jones (Krysten Ritter), Danny Rand (Finn Jones), and the “Daughters of the Dragon” duo, Misty Knight (Simone Missick) and Colleen Wing (Jessica Henwick).

In the finale of The Defenders, our heroes fought the Hand underground, miles deep below Midland Circle. As the building collapsed, most of the Defenders got out, except for Daredevil, who stayed behind in a vain attempt to save Elektra. Most of New York thinks Matt Murdock is dead but hidden away in a Catholic convent, a bruised vigilante stirs…

What is the plot of Daredevil Season 3?

In the aftermath of The Defenders, Matt Murdock reemerges as a vigilante but questions his future. When Wilson Fisk (Vincent D’Onofrio) is released from prison, Matt must decide where his fate finally rests.

“Matt starts the season broken physically, broken emotionally, and broken spiritually,” showrunner Erik Oleson told Entertainment Weekly. “He’s angry at God, he’s angry at the fact that he had risked his life to do God’s work, and he’s questioning whether or not he was a fool.”

Who is the villain of Daredevil Season 3?

D’Onofrio returns as Wilson Fisk, the “Kingpin” of New York City. But Variety reported in 2017 that Wilson Bethel (Hart of Dixie) was cast as a series regular. Over the summer, rumors ran that Bethel’s character would be Bullseye, a chief nemesis of Daredevil known for pinpoint accuracy with a gun. This was later softly confirmed to be true by Entertainment Weekly, who described Bethel’s character as “a psychologically tortured FBI sharpshooter.”

Who stars in Daredevil Season 3?

All the old favorites are back, including:

Why Is Matt wearing his old black costume again?

Without giving away spoilers, there’s a heavy theme of “rebirth” for Matt Murdock after his “death” in The Defenders. It’s important to the story.

“Matt goes to pretty much the darkest place you can,” Oleson said in an interview with Entertainment Weekly. “When he realizes that he’s incapable of being Daredevil, he would rather just end it than go forward in his life without abilities. He’s decided to set aside his Matt Murdock persona and just be the Devil, to isolate the lighter part of himself.”

How many episodes were in Daredevil Season 3?

Like the other two seasons before it, Daredevil Season 3 had 13 episodes.

What comics was Season 3 adapting?

In an August 2017 interview with The Hollywood Reporter, Cox hinted that the iconic Frank Miller storyline “Born Again” will be a big inspiration.

“That’s such an amazing story,” Cox said. “There may be elements from ‘Born Again,’ but I’m sure there will be elements that are unfamiliar and surprising and different in order for the show to be compelling to fans who know the comics very well. If we start making ‘Born Again’ page-for-page, then the people who have read it and loved it — the hardcore fans — they won’t have too much drama.”

You can pick up Daredevil: Born Again on Comixology, Amazon, or your local comic book shop.

Was Daredevil renewed for Season 4?

Unfortunately, the adventures of Matt Murdock ended after three seasons. Netflix announced Daredevil would be canceled in November 2018, one month after Season 3 dropped. It was part of an effort from the streaming service for all of the Netflix/Marvel content to come to an end, as MCU content began to build on Disney+. Unlike other Defenders series like Iron Fist and Luke Cage, Netflix did say in their cancellation announcement that Matt Murdock would live on in other Marvel projects, which has got fans talking about whether Charlie Cox will suit up once more.

Season 3 of Marvel’s Daredevil premiered on October 19, 2018 on Netflix.