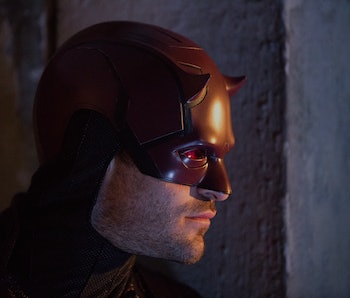 Have you seen Matt Murdock? Marvel is looking for the best lawyer in Hell’s Kitchen’s to promote Daredevil Season 3 on Netflix ahead of its still-unconfirmed release date.

It’s not because of Thanos and his Infinity Gauntlet that Matt Murdock has vanished. In the series finale of Marvel’s The Defenders, Daredevil stayed behind beneath Midland Circle in order to get Elektra (Elodie Yung), while the rest of the Defenders scrammed like the Scooby-Doo gang before it collapsed.

Since then, Matt Murdock has been either “dead,” such as in the eyes of Jessica Jones, or missing, in the case of the NYPD. Of course, fans know Matt isn’t missing. In the final shot of The Defenders, Matt is seen healing in a Catholic convent where he’ll meet someone very, very important to him.

While the film side of the MCU is dealing with half of the universe vanishing out of existence, the television side is more concerned with personal, pressing matters. Both Jessica Jones and Luke Cage dealt with enemies who hit very close to home, while the upcoming season of Iron Fist will see Danny Rand step up to stop a gang war from destroying Chinatown.

Following the initial tweet, verified accounts representing the rest of the Netflix/Marvel Defenders chimed in, offering a taste of how Jessica Jones, Luke Cage, and Iron Fist might react to this poster in person. Of course, the irony is that while these characters think Murdoch is dead, we as the audience know he’s still very much alive.

Meanwhile, rumors that famed Daredevil nemesis Bullseye will appear in Daredevil Season 3 further serve to prove just how personal the stakes are. These guys aren’t saving the universe. They’re just trying to protect their worlds.

Marvel’s Daredevil Season 3 does not yet have a release date.