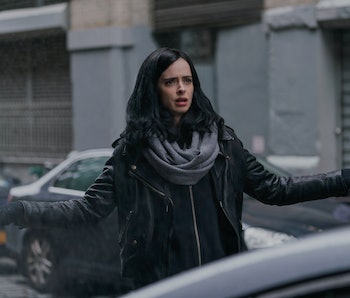 Back in August 2017, the hard-drinking Jessica Jones teamed up with three other superpowered New Yorkers — Daredevil (Charlie Cox), Luke Cage (Mike Colter), and Iron Fist (Finn Jones) — to save their city from the Hand. Though Jessica is tough as nails on the surface, it turns out the experience of Marvel’s The Defenders hit a soft spot.

In an interview with Inverse, Krysten Ritter and Rachael Taylor, co-stars on Marvel’s Jessica Jones, reveal how acting like a real superhero for the first time — — and seeing another hero fall in the line of duty — changed Jessica ahead of her second season return on Netflix.

In Season 2 of Jessica Jones, the hard-boiled P.I. is managing her detective agency while still getting over Kilgrave. “That trauma doesn’t just go away,” Ritter tells Inverse. Also, Jessica Jones is bothered with her newfound popularity as a superhero, which is the very last thing a loner like Jessica Jones wants.

“I don’t think that was helped at all by the events of The Defenders so that further complicates her relationship with her own existence,” Ritter says. In fact, The Defenders proved to Jessica just how much it sucks to make new friends. “There is one thing I always forget to talk about. In The Defenders, Jessica in her way became friends with Daredevil, and he dies at the end.”

At least, that’s what Jessica Jones thinks. In the finale of The Defenders, the four superheroes teamed up to stop the Hand, but the building collapsed on Daredevil, who was too preoccupied with his old flame Elektra to escape. The other three think Daredevil is dead, but in the final shot of The Defenders, Matt Murdock is clinging on to life in a Catholic hospital — where Matt’s biological mother may not be far away.

Still, from Jessica’s point of view, she finally makes a friend, and that friend ends up dead. That stress, Ritter says, confirms that Jessica Jones should never open herself up to people — even fellow superheroes.

“That illustrates that nothing good comes from opening your door,” Ritter says. “I think those two characters have mutual respect: Jessica respects him, Jessica likes him, they have a banter. So when he dies, of course nothing good happens when you leave your house.”

Jessica’s foster sister Trish Walker, meanwhile, had a different experience after The Defenders. “At the forefront of Season 2 is Trish’s appetite for more,” Taylor tells Inverse. “She wants to be more than what she is: She wants power, Jessica has power. If there’s trickle effect of The Defenders, it’s added fuel to her fire to be more than what she is.” Throughout Season 2 of Jessica Jones, Trish and Jessica investigate the truth behind Jessica’s powers.

It’s probably Trish who wants to know more than Jessica does. Taylor reassures that Trish’s “intentions are good,” and not a selfish pursuit of powers. “She wants to see Jessica move forward with her life. Jess is a haunted character, and Trish wants to see her confront the demons. I think she thinks she’s trying to help.”

Marvel’s The Defenders and Jessica Jones Season 2 are streaming now on Netflix.