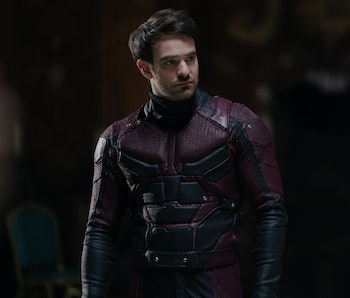 Just as Iron Man made a bold first impression for the Marvel Universe when it hit theaters in 2008, so did Daredevil, the first of five Marvel TV shows that are also Netflix originals, when it premiered in 2015. But while it was important for Marvel to get off on the right foot in the streaming world, actor Charlie Cox says he paid little mind to the pressure on his shoulders as Daredevil’s leading man and the OG member of the all-important Defenders team-up.

“When I signed on to do Daredevil, they told me they were gonna do The Defenders at some point. To me, that sounded like that was the plan no matter what,” Cox told Inverse in a phone interview. “Obviously I hoped that Daredevil was good and that it started strong, and we made a good show — simply because I just want to do good work and, you know, be hired again.”

Cox, who prior to Daredevil was best known for his stint as Owen Sleater in HBO’s Boardwalk Empire, had no need to worry. (He also says Daredevil would own Owen in a fight; “Daredevil would win — that’s if Owen Slater didn’t get him in a bathroom beforehand, and strangled him.”) After the acclaim and buzz that surrounded Daredevil, Marvel had the foundation to move forward with its other shows in a two-year journey that’s culminated with The Defenders, in which Daredevil joins forces with the leads of Marvel’s other three shows: Jessica Jones, Luke Cage, and Iron Fist. But how much will their war against a cabal of ancient ninjas, known as The Hand, change the Devil of Hell’s Kitchen? Cox says Daredevil might finally realize he doesn’t have to do everything alone.

“He’s been recognizing he is not powerful enough himself to combat the evils he’s being faced with,” explains Cox. “[This] has been a long journey for Matt. He’s taken his time, recognizing that he can’t do this by himself. He needs help. He came towards that realization in Season 2 with Elektra. After her death, he’s ashamed of what happened, and hurt by the whole thing. The combination of those two seasons, all those successes and failures, have left Matt vulnerable enough that he’s, for the first time ever, going to be a bit open-minded when the idea of working with others is presented.”

But just because Matt finally recognizes that he needs help doesn’t mean he’s ready to join a team. In The Defenders, all four heroes find that they’re after the same enemy, but share little else in common. “There’s four characters who, fundamentally, don’t have any interest in working as a team or together. What The Defenders tries to do is it tries to put these guys in a room and make them stay there,” said Cox.

With The Defenders in the can, fans may already be looking ahead to Daredevil Season 3. Cox is careful not to give anything away, if only because he admits he doesn’t know anything about the new season yet. “I would hate to preempt what’s gonna happen,” jokes Cox. But he does offer his own educated guess.

“Matt could feel like this is a clean slate,” Cox says. “He can start over and he can really evaluate and reassess who he is. I imagine what happened with The Defenders is gonna feel like a success for Matt, what they achieved. But I do think that, because the whole show takes place over only one week, I do think the burden of everything that’s come prior to The Defenders will still weigh very heavy on his shoulders. And there’s a lot of emotional work for him to do in order to start moving on from everything that led up to meeting those other three.”

Regardless of how much Matt will change, MCU fans can count on one thing to stay the same: Matt Murdock will always be the poutiest Defender.

The Defenders is streaming now on Netflix.