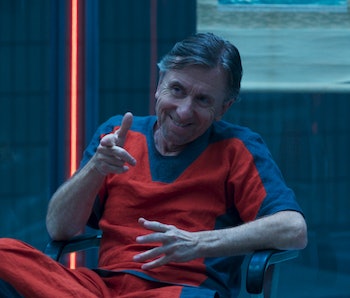 For all the faults in Phase Four of the Marvel Cinematic Universe, there’s one part of the storytelling machine that’s shown marked improvement: The villains.

From Agatha in WandaVision to Wanda herself in Doctor Strange in the Multiverse of Madness, this era of the MCU has had remarkably compelling and even original villains. That’s no small feat, especially considering the franchise’s roots in pre-existing comics. Take for instance Wenwu, the handsome and masculine antagonist (played by the legendary Tony Leung) of Shang-Chi and the Legend of the Ten Rings, who reflected nothing of the racist caricature he was in Marvel’s original Master of Kung Fu comics.

But the continuing nature of the MCU means Phase Four has also allowed the franchise to revisit past villains and afford them a second life at depth and, perhaps, pathos. The best version of this potential future so far is seen in She-Hulk: Attorney At Law, with Tim Roth returning as Emil Blonsky, a.k.a. the Abomination.

When he was introduced in 2008’s The Incredible Hulk (released almost a full 15 years ago), Emil Blonsky was little more than a hired mercenary with a vague backstory. As delivered in voice-over: “Emil Blonsky. Born in Russia. Raised in England. And on loan to SOCOM from the Royal Marines.”

Even for a Marvel movie, his lore is anemic in its absence of any flavor or twist that would make him such a worthwhile antagonist — especially for the Hulk.

About 48 minutes into The Incredible Hulk, Blonsky is given a partial injection of the same gamma serum that turns Bruce Banner (played in the film by Edward Norton, replaced by Mark Ruffalo in later movies) into the Hulk; the serum itself is derived from the same “Super Soldier” experiments that gave the world Captain America. Of course, the serum doesn’t react too nicely to Blonsky, turning him into the monster known as Abomination.

Fast forward a decade and a half to She-Hulk, and Roth is back as Blonsky, detained at a supermax prison due to his dangerous alter ego. Jennifer Walters (Tatiana Maslany), a lawyer and maternal cousin of Bruce Banner, is assigned to represent Blonsky in a case that could free him from detention. Much of She-Hulk’s comedy derives from the implicit fact Tim Roth has enjoyed a long career playing love-to-hate-them sleazeballs, from his Pulp Fiction diner robber to The Hateful Eight, where he plays an English hangman in a bowler hat who maintains a very matter-of-fact view on his job as a government-sanctioned killer.

Roth brings that same energy to the MCU in spades. In She-Hulk, he humbly pleads for his release, wrapping himself in a blanket like a grandpa and relishing in the admiration of a harem who’ve fallen for him behind bars. (It’s a thing, in case you don’t know.) Whether it’s because Roth is just too good at playing characters who appeal so strongly to vulnerabilities, or because Blonsky truly believes in his reformation, it’s almost too easy to be convinced.

His strongest argument lies in his alleged manipulation. In She-Hulk, Blonsky says the U.S. government lied to him about the serum. He believed he was doing the right thing because a country asked him to. (He’s English, so it’s technically not his country.) Retrace Blonsky’s earliest steps in the MCU, and it’s hard to argue otherwise.

In an exchange between Blonsky and General Thaddeus Ross (played by the late William Hurt) in The Incredible Hulk, you can see the exact moment when Blonsky was, indeed, lied to — or at least sold on an idea for which he could never have imagined the price tag:

Ross: “You’re aware that we’ve got an infantry weapons development program. Well, in WWII, they initiated a subprogram for biotech force enhancement.

Ross: “Yes. An oversimplification, but yes. And I dusted it off, got ‘em doing serious work again. Bold work. Across the hall, they’re trying to arm you better. We’re trying to make you better.”

Emil Blonsky might be scummy, but he’s not wrong. He was tricked by a U.S. general into submitting himself to become Abomination. On its own, it makes for a juicy supervillain origin, especially for a “forgotten” Marvel movie. In the rich tapestry of worldbuilding that is the MCU, even a one-off villain like Blonsky is afforded a chance to make his case and reveal an instance where the bad guy maybe wasn’t totally a bad guy.

As a superhero sitcom primarily focused on Jennifer Walters, there’s only so much focus She-Hulk can put on Blonsky before turning the camera back on its lead heroine. What becomes of Abomination next is for those in charge of the Thunderbolts movie to decide. (Roth is confirmed to return as Emil Blonsky/Abomination, alongside other villains tasked with saving the world.)

But, for now, Abomination is proof that not all villains have to remain the jobbers that earlier days of Marvel demanded. If She-Hulk is any indication of the MCU’s future, new narrative light can shine on the most surprising of places, in the most unexpected of ways.