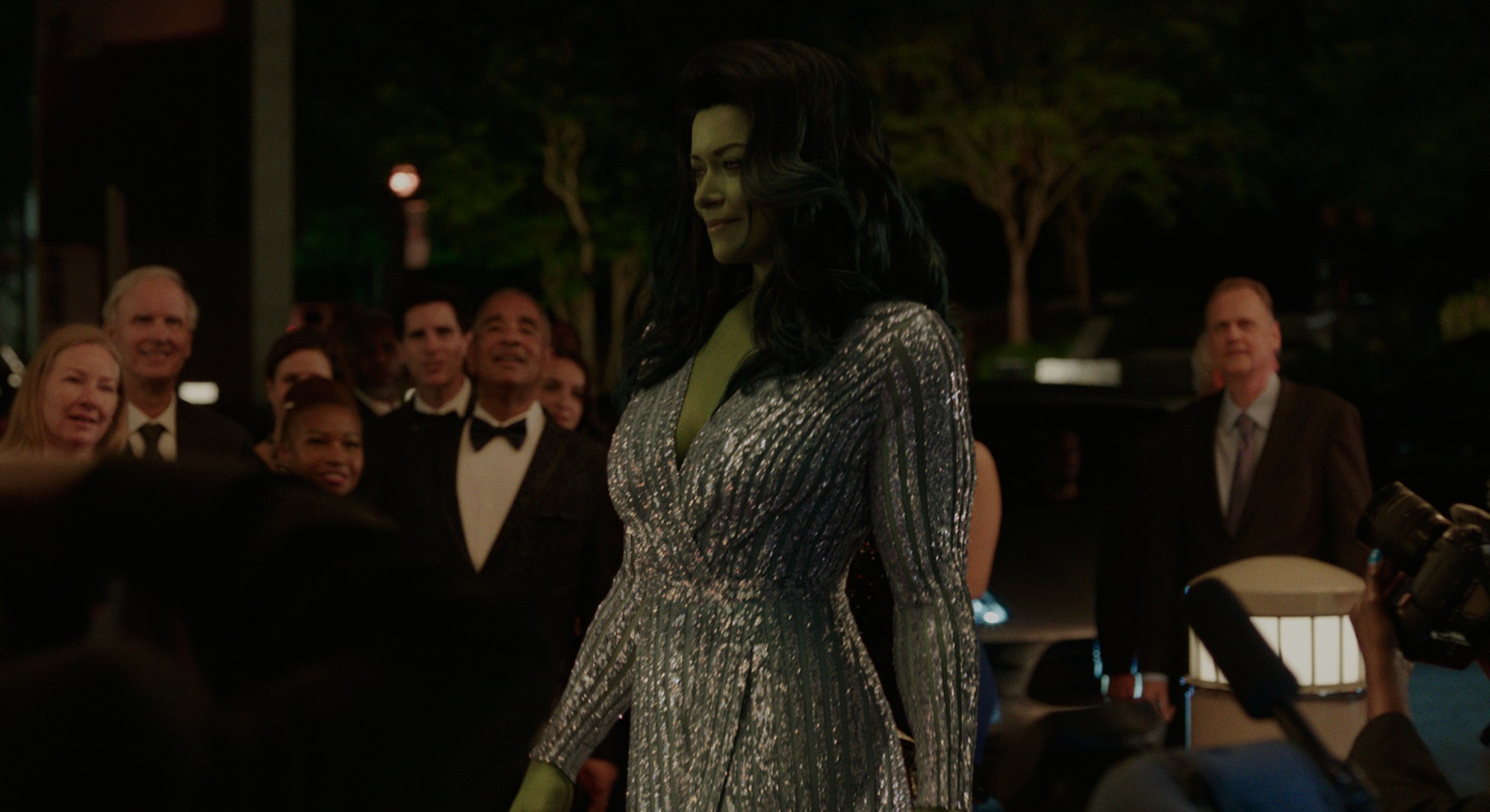 I had to try the Cheetos thing.

It goes like this: In She-Hulk: Attorney At Law, streaming August 18 on Disney+, thirty-something lawyer Jennifer Walters (Tatiana Maslany) tells her cousin Bruce Banner (Mark Ruffalo), also known as “The Hulk,” that the best way to eat Cheetos is with chopsticks. “So you don’t get Cheeto fingers!” she brags. She might have learned it from Moon Knight.

Anyway, I thought it was clever and had to try it. So over four episodes made available to the press, I let myself indulge in a cheat snack using Jennifer’s trick. Whether it was because I had a mouthful of salty cheese and no residue, or because She-Hulk is another Marvel mega-production of empty calories, I had fun, even if I knew I wasn’t having a real meal.

Set after Avengers: Endgame and during Shang-Chi, Jennifer Walters is an up-and-coming L.A. lawyer when a car wreck caused by an alien spaceship (hey, there’s your set-up for World War Hulk in Phase 6 or whatever) has her contract some of her cousin’s gamma radiated-blood. To Bruce’s surprise, Jennifer can keep her human ego intact when she’s hulked out. After meditating at his private beach-slash-laboratory, Jennifer returns home to resume a normal life. But when her superhero ego is made public, she finds how much legalese is hidden in the fine print beneath great power and great responsibility.

Like a lot of Marvel’s offerings on Disney+, She-Hulk: Attorney At Law is the result of smart writing and an A+ performance by a captivating lead getting hampered by slipshod editing, awkward plot structure, and unnerving visual effects (which we’re learning are made under appalling working conditions). There’s a welcome and assured feminist perspective that lends She-Hulk some philosophical and creative angles, though its revelations about millennial womanhood, equity, workplace politics, and the dicey dating pool you swim in your thirties don’t feel super fresh. See Jennifer sign up for a dating app and recognize that nagging feeling Supergirl — or worse, SNL’s “Black Widow Trailer” skit — did it all years ago.

Thankfully, She-Hulk has an easygoing tone and a highly-effective Maslany, whose powers include effortless charisma, funny faces, and sharp comic timing. It’s all entertaining enough to cancel out She-Hulk’s worst vulnerabilities, most of which lie in its technical execution. I’ve not seen a Marvel pilot this disengaging since Inhumans, and while later episodes won me over, I expect many to tap out after a single episode. But should one invest more time to adjust to its vibes, it becomes easier to see She-Hulk as the thing it should be known: Marvel’s first Hang Show, a chill comedy whose strength is in its laidback disposition.

What makes up She-Hulk are loosely connected episodes where Jennifer’s dual role as a superhero and lawyer sees her handle unusual cases and, of course, unusual clients. (No spoilers, but it’s who Jennifer’s clients are that will get most fans buzzing.) It’s not the weekly procedural She-Hulk should have been, nor is it the overly stretched eight-hour movie streaming audiences expect. It tries to be both, and it isn’t great at either. But when a show is this much fun and unimportant (and I mean that as a compliment), it’s easy to not care so much about the packaging.

She-Hulk isn’t Marvel’s first comedy, but it’s the first in the franchise to feel broadly conventional. Ironically, seeing something so pedestrian like She-Hulk feels refreshing coming from Marvel. For too long, the brand has specialized in its own extremely specific type of action and drama sandwiched by humor to lighten its heavy stakes. But as recently as Thor: Love and Thunder, that style breached a breaking point. Marvel’s dedication to its schtick has worn so thin it undermined any of that movie’s narrative objectives.

By contrast, She-Hulk doesn’t have this problem. No, its jokes aren’t always the most hysterical or original. Even Jennifer’s fourth wall-breaking asides — which, yes, her comics did before Deadpool — aren’t used to maximum effect. (Though I admit I found Jennifer roasting overly serious fans pleasing.) Let us also recognize no show will ever break the fourth wall as sublimely as Fleabag, because there’s just no way the micro-managerial Marvel would ever let She-Hulk be so ambitious.

But She-Hulk has plenty else to offer. It isn’t the capital-M Marvel show most fans are going to love; it’s light on action, at least in the first four episodes, and its many cameos from the MCU will make most diehards foam at the mouth over how much they “nerfed” this or that character. The criticisms against the show’s VFX are also justified, as Jennifer’s She-Hulk form is just plain distracting in its residence in the uncanny valley. She just never looks or feels right (my take: there’s something about the hair) no matter how much Maslany tries to act her way out of it.

But there’s still something appealing, approachable, and enjoyable in its unserious nature, all of which feels invigorating coming from the all-too-important MCU. She-Hulk is funny in the way most competent comedies are, even if its mixture with the MCU isn’t a match made in heaven, let alone a dating app. In the times She-Hulk’s jokes actually do land, when oddball pacing doesn’t get in the way, and Maslany’s firing on all cylinders, it can be almost joyous. If Disney wasn’t so gung-ho on streaming, She-Hulk would be right at home on ABC, airing on the 9 p.m. timeslot with The Rookie on weekday nights.

Like picking up Cheetos with chopsticks, nothing about She-Hulk is inventive. But it’s a clever and convenient way of enjoying a snack.