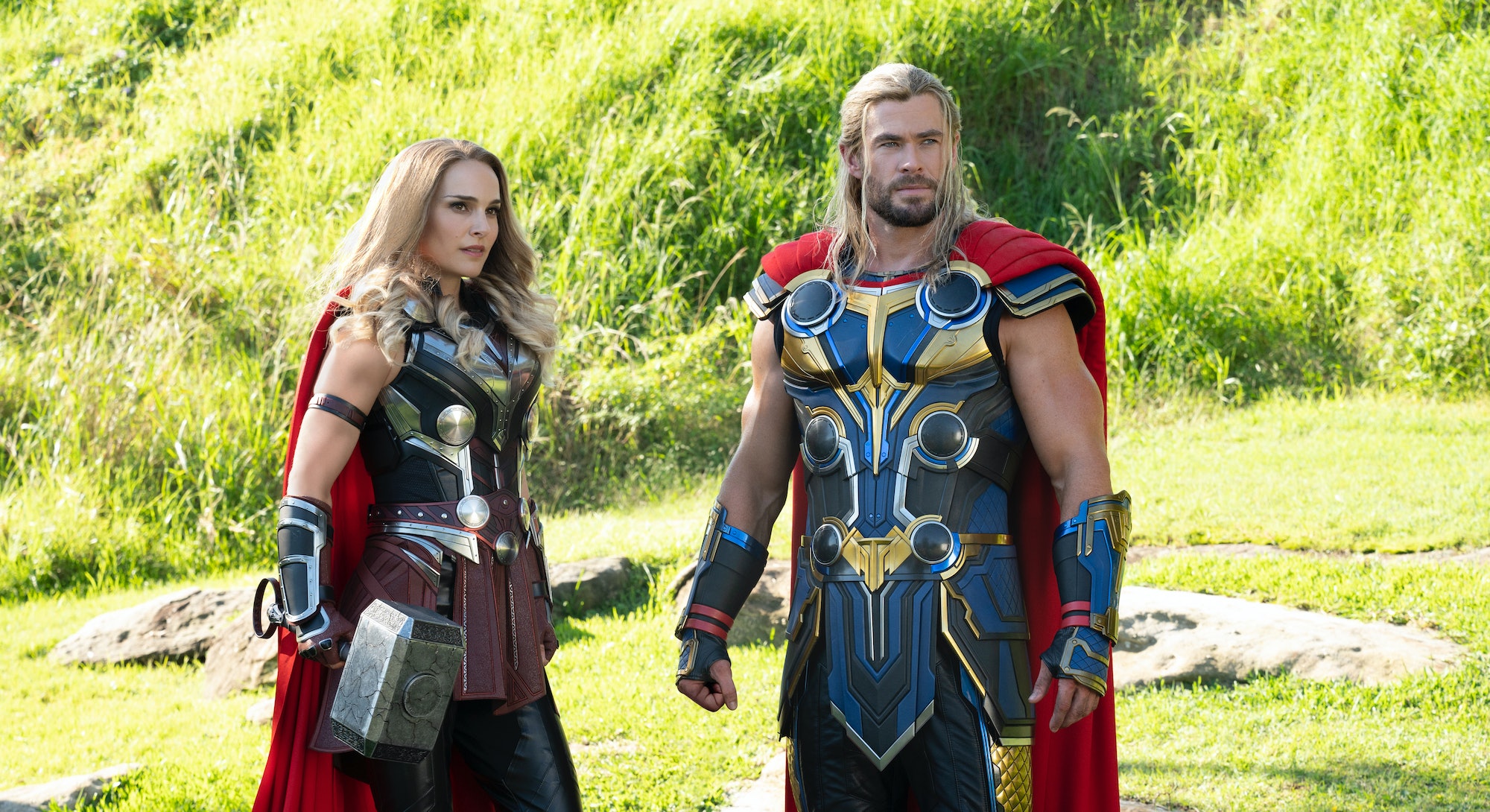 What is Thor’s story in the Marvel Cinematic Universe, really?

The other Avengers are easier to grasp. Tony Stark (Robert Downey Jr.) is an arrogant, ego-driven capitalist of Ayn Rand’s fantasies whose selfless last act saved the world. Steve Rogers (Chris Evans) is forever a puny dweeb with a big heart who stands up to bullies no matter how many inches his biceps grew.

As of Thor: Love and Thunder, in theaters July 8 from director Taika Waititi, Chris Hemsworth’s spoiled prince turned idiot jock is now meandering, left in the purgatory of a roundabout tale that makes some sense on paper but in execution fails to maintain viscosity. It’s now mighty clear Marvel Studios doesn’t know what to do with the Mighty Thor, for what should have been (and was straight-up advertised) as Hemsworth’s curtain call from these movies amounts to little more than an open-ended season finale of a TV show that has gotten too comfortable and too unambitious.

Thor: Love and Thunder is framed by Korg (Waititi in mo-cap), who laboriously catches the audience up on Thor’s past and present via campfire. After Avengers: Endgame, Thor has been with the Guardians of the Galaxy (in glorified cameo capacity) traversing space answering distress calls. But Thor lacks something in his life and is unexcited by the thrill of battle.

Thor is pushed into action when a string of dead gods alarm him. The murders are the work of Gorr, Christian Bale playing a sinewy and oily peasant follower of a selfish god who took no pity on his suffering. Aided by the Necrosword, an ancient weapon of shadows, Gorr begins a murder spree, vowing revenge on all gods. One wonders why he didn’t opt for the Infinity Stones, but alas.

Thor finds unexpected help in Jane Foster (Natalie Portman), a decorated scientist and ex-girlfriend last seen in Thor: The Dark World nine years ago. Suffering from stage four cancer, Jane is summoned by the shattered pieces of Mjolnir and becomes empowered with the power of Thor, taking on the “Mighty Thor” mantle herself alongside, well, Thor.

Five years after Taika Waititi jolted Marvel, and Hemsworth, out of apathy with 2017’s Thor: Ragnarok, he returns for Thor: Love and Thunder, a script co-written with Jennifer Kaytin Robinson while pulling directly from writer Jason Aaron’s Thor comics. While Ragnarok was greeted with revelry as one of Marvel’s funniest entries, Love and Thunder struggles with its monumental expectations. Though it strives for an emotional story about loss and love, the movie gets in its own way with tiresome relentless comedy, distracted plotting, and uneven tone.

“Uneven” truly is the best word to describe it. Overloaded with laughs in the front and anchored by deadly seriousness in the back, Love and Thunder is a mix of disparate and conflicting ideas that never coalesce into a coherent vision. It’s all the more strange Love and Thunder takes cues from Aaron’s comics, which are not only the best examples of authorship in mainstream comics but fittingly reverent to epic fantasies. It’s a tragic story, but Waititi seems too disinterested to sincerely engage with the gravity the material demands.

Even the way Love and Thunder unspools feels misdirected. After a rock-solid prologue revealing Gorr’s creepy origins, the rest of the film wastes its enviably rich foundations — what other long-running film franchise can offer a veteran hero contemplating retirement and an ex with powers of her own? — to become manic and hurried. Despite the work of Bale in a legitimately scary performance unlike his ascetic Batman, by the end there’s the nagging itch of something absent that the more tightly-bolted Ragnarok had in spades.

Love and Thunder is still funny (you just won’t believe how much mileage Waititi can get out of screaming goats), and its action is exciting in the way comic book splash panels traditionally are, with a standout segment in Sin City-esque black-and-white that feels like Waititi thumbing the nose of critics who argue Marvel’s movies are grotesquely colorless. But in a movie obsessed with Guns N Roses needle drops, Love and Thunder can’t find a singular, original rhythm of its own.

Hemsworth is still a mighty presence, proving he’s the resulting mix of Steve Martin’s cornball comedy and a gallon of creatine. His demeanor of a lunkhead in a china shop never wears thin even when the script stretches to the seams. Portman also bedazzles, demonstrating a killer combination of her established acting depths and a newfound UFC-ready swagger.

It’s just a shame both actors yield to lesser things like jealous CGI axes. They’re both fully capable of delivering the fury on their own, but when a movie’s weapons have more personality and importance than the humanoid characters, you know something went wrong. The two have chemistry, but there’s distance. They’re handsome in the way Hollywood pairings are, but when they stand together in armor it has the distracting optics that Waititi is playing with Hasbro action figures and making kissy noises.

So, what’s Marvel to do with Thor? No spoilers here, but the movie implies Marvel isn’t sure itself. (Not with ongoing contract negotiations behind the scenes, at least). And here we find ourselves in the quagmires of the modern cinematic universe. Like its characters caught in a will-they, won’t-they situation, what should have been a rollicking finale — a Thor farewell to match Captain America and Iron Man’s — Thor: Love and Thunder only leaves us with exhausting questions about what’s next, rather than the satisfaction in finishing what’s started.

Thor: Love and Thunder will open in theaters on July 8.