“She’s had a whole other life” 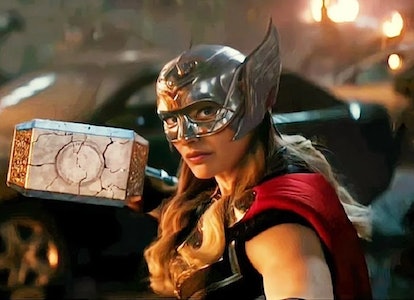 Thor: Love and Thunder is about to change the game. Gone are the dense Thor and Thor: The Dark World, and even the spinoff energy of Thor: Ragnarok has been set aside. Love and Thunder is set to be a bombastic adventure featuring not only Thor, Valkyrie, and the other Asgardians, but also the Guardians of the Galaxy.

The most shocking appearance is undoubtably Jane Foster as Thor, dubbed by Marvel as Mighty Thor. But, based on a recent interview, shocked Marvel fans may need to dial back their expectations.

In an interview with Empire, Thor: Love and Thunder director Taika Waititi describes Jane’s big reinvention by saying “It’s been about eight years. She’s had a whole other life, and then the love of your life comes back on the scene, and is now dressed like you. It’s a real mindfuck for Thor.”

This quote makes it seem like Jane’s intro in the trailer will basically be how she’s introduced in the movie, and if so, Waititi’s description may be an understatement. However, this quote does cast doubt on how Jane’s storyline will be handled.

In the comics, Jane’s tragic backstory takes center stage as we see her cope with a cancer diagnosis, only to be revived when she’s found worth to lift Mjolnir. But if the first time we see Jane is also the first time Thor does, at a climactic battle, it’s unlikely her backstory will be given the attention it deserves — at least, not in this movie.

There’s always the possibility that Jane’s story will be present but completely separate from Thor’s storyline, but that’s unlikely since the trailer makes it seem like it’s firmly his narrative. She may also be Thor, but he’s the Thor this movie is about, apparently.

Hopefully, Thor: Love and Thunder shows us Jane’s backstory instead of just telling it. Her life has had so many changes since we last saw her, and the least this movie could do is catch us up with just how Jane came across the hammer and learned to wield it.

This doesn’t discount the possibility that Jane will have the screentime she deserves in the future. Just as Mighty Thor was given her own comic series, she could be given her own MCU project. But if she’s going to make an entry into the franchise, fans should have all the info so her appearance makes the splash it so clearly has the potential to.