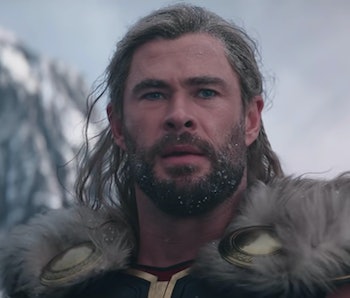 It hasn’t yet been confirmed whether Thor: Love and Thunder will be Chris Hemsworth’s final Marvel Cinematic Universe film, but there’s reason to believe it might be. After all, the first trailer for Love and Thunder focuses a lot on Thor’s newfound desire to retire and put his superhero days behind him.

His first meeting with Gorr the God Butcher (Christian Bale) will likely force Thor to temporarily sideline those plans, but that doesn’t mean he’ll still be the same hero at the end of Love and Thunder that he is at the start of the film. In fact, it’s for that reason some Marvel fans even believe Hemsworth’s Thor will be permanently laid to rest.

The Theory — Following the release of the first Thor: Love and Thunder teaser earlier this week, one MCU fan recently took to Reddit to share an interesting new theory. The Redditor isolated a moment from the film’s trailer where Stormbreaker is placed upright in the ground and Thor is shown walking away from it, or at least that’s what most fans believe is happening in the image.

But what if it isn’t Thor who is walking away from Stormbreaker? What if, as this theory argues, it’s actually Jane Foster (Natalie Portman)? That would suggest the scene isn’t showing Thor putting his violent ways behind him, but Jane laying her former partner to rest.

Is it possible that Stormbreaker is being used as a headstone for the grave of its wielder?

Thor’s Final Adventure — As is always the case with these kinds of theories, it’s impossible to know if it’s correct until Thor: Love and Thunder is actually released. That said, it’s certainly possible that the trailer’s Stormbreaker scene isn’t what it appears to be. And Jane Foster’s appearance as The Mighty Thor in Love and Thunder means there’s a chance it’s her that can be seen standing near Thor’s axe.

If that is indeed what’s going on, that would also mean Hemsworth’s Thor either dies in Love and Thunder or decides to permanently step away from the superhero lifestyle. Either direction would presumably mean that it will be the last MCU film featuring Hemsworth as the iconic comic book hero.

It’s worth noting that no one involved in Thor: Love and Thunder has suggested that’s the case yet. In late 2021, Chris Hemsworth even said that he’d continue to appear in the MCU for as long as Marvel will have him. Maybe this is just wild speculation... but Marvel actors haven’t been terribly honest about their intentions recently either.

The Inverse Analysis — A few months ago, the chances that Thor: Love and Thunder would contain a scene where Jane Foster lays Thor to rest might have seemed slim. However, coming off the film’s first teaser trailer, the idea doesn’t seem nearly as far-fetched. It’s a scene that would certainly make sense in a film about an immortal superhero wanting to settle down and find peace. Fans will just have to wait until the movie comes out to get their own closure.