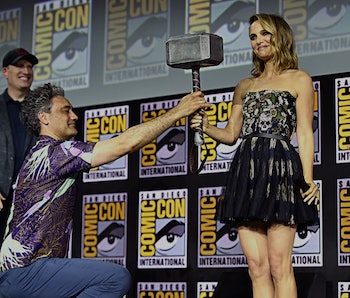 July 20, 2019. Almost three years ago, the Marvel Cinematic Universe made a promise. On stage at Comic-Con San Diego, Thor: Love and Thunder director Taika Waititi made the bombshell announcement that Jane Foster, Thor’s ex-girlfriend, would take on the Thor mantle and wield Mjolnir. He then presented a prop of the hammer to Jane Foster actor Natalie Portman, who held it aloft.

But for years afterward, this was our only glimpse of the future of Thor. Sure, there were set leaks, but this new Thor remained elusive until the release of the first teaser trailer for Thor: Love and Thunder. Here’s everything you need to know about the new alter ego.

The trailer for Thor 4 contained all sorts of interesting tidbits, from Thor shedding his Endgame weight, to a Peter Quill appearance, to Valkyrie trying her hand at local governance. But the biggest reveal came in the last few seconds, depicting a very buff Jane Foster as The Mighty Thor, just like her transformation in the comics.

We finally have confirmation of what this version of Thor will look like, and the answer is “really cool.” This glimpse doesn’t reveal how she comes to be in possession of the hammer, or even how the hammer is in existence after it was broken by Hela in Thor: Ragnarok. But while we may not know how we get to this epic moment, we now know it’s coming.

In the comics, Jane fights breast cancer while Thor is off sparring with Gorr the God Butcher, which leaves her weak. But as soon as she lifts Mjolnir she’s instantly restored to health and granted all of Thor’s powers, as she is judged truly worthy. It’s still unclear whether we’ll see the MCU Jane Foster take the same path to her powers, but it looks like the end result is identical.

It’s important to remember that this is just the teaser. There’s a full trailer still on the way, and considering how we’ve already seen our first Mighty Thor reveal, it’ll probably provide a more detailed look at not just Thor’s journey, but Jane’s and Valkyrie’s too. Thor 4 is bigger than just the God of Thunder himself; it’s also about the women who’ve helped him every step of the way.

Thor: Love and Thunder premieres in theaters on July 8, 2022.