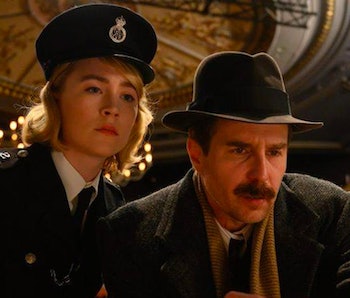 We’re living in a whodunit renaissance, and it’s hard to pinpoint where it started. Maybe it was the classic Agatha Christie adventures in Kenneth Branagh’s passion projects Murder on the Orient Express and Death on the Nile. Maybe it was the intriguing drama in the otherwise comedy-focused The White Lotus, or the slow burn of Mare of Easttown. And, of course, there was the star-studded ensemble assembled for Rian Johnson’s updated whodunit, Knives Out.

But while Knives Out’s sequel, Glass Onion, is making a splash by squaring itself firmly in the present, another underrated whodunit incorporated all of the elements of the modern genre with a vintage spin.

See How They Run starts how all good murder mysteries start: With a murder. The deceased is Leo Kopernick (Adrien Brody), the man hired to direct the fictional film adaptation of Agatha Christie’s hit play The Mousetrap, in reality the longest-running show of any kind.

On the case are Inspector Stoppard (Sam Rockwell, doing a passable British accent) and Constable Stalker (Saoirse Ronan). The list of suspects includes everyone at The Mousetrap’s 100th performance party, who all have their own motives.

At first glance, the Agatha Christie-ness of it all makes it appear like a straightforward mystery akin to Branagh’s Poirot revivals, but nothing could be further from the truth. From the first scene, See How They Run makes it clear it knows it’s a movie, and the artifice of performance is the source of much of the humor. When Leo is trying to defend himself from the unseen murderer in the theater’s prop shop, he throws a prop vase, only for it to prove useless. In another scene, The Mousetrap’s screenwriter rants against the use of time jumps in movies in a scene immediately followed by a time jump.

Beneath all the meta jokes is a genuinely compelling mystery involving a love child, an interracial affair, Inspector Stoppard constantly trying to dodge work, Agatha Christie herself, and some touching examinations of post-Blitz London. It’s all wrapped up with a heart-wrenching finale that eventually reveals itself to be one long joke. It’s probably the most satisfying ending to a movie this year.

But this movie’s real secret weapon is its cast. Aside from the two banner stars, the ensemble includes Ruth Wilson, David Oyelowo, and Sian Clifford, as well as top-tier British comedians like Reece Shearsmith, Charlie Cooper, and Tim Key. First-time feature director Tom George cut his teeth with the hit British sitcom This Country (remade in America as Fox’s Welcome to Flatch), and the blending of the classic mystery elements with cutting-edge humor makes it almost impossible to categorize.

See How They Run has the humor of White Lotus and the intrigue of Agatha Christie, and it manages to deliver cutting-edge observations and jokes that could only exist in a 2022 movie. Anyone can make a mystery feel fresh when it’s set in the present. Only a master can set a mystery in the genre’s golden age and still deliver something completely unexpected.

See How They Run is streaming on HBO Max.

More like this
Culture
Jan. 23, 2023
5 years ago, DC released the best Batman movie you haven't seen
By Laura Kelly
Culture
Jan. 27, 2023
The Master was called a movie about Scientology, but it’s about so much more
By Dais Johnston
Culture
Jan. 29, 2023
A 2011 Jake Gyllenhaal thriller reinvented the time travel movie
By Alex Welch
LEARN SOMETHING NEW EVERY DAY.
Related Tags
Share: