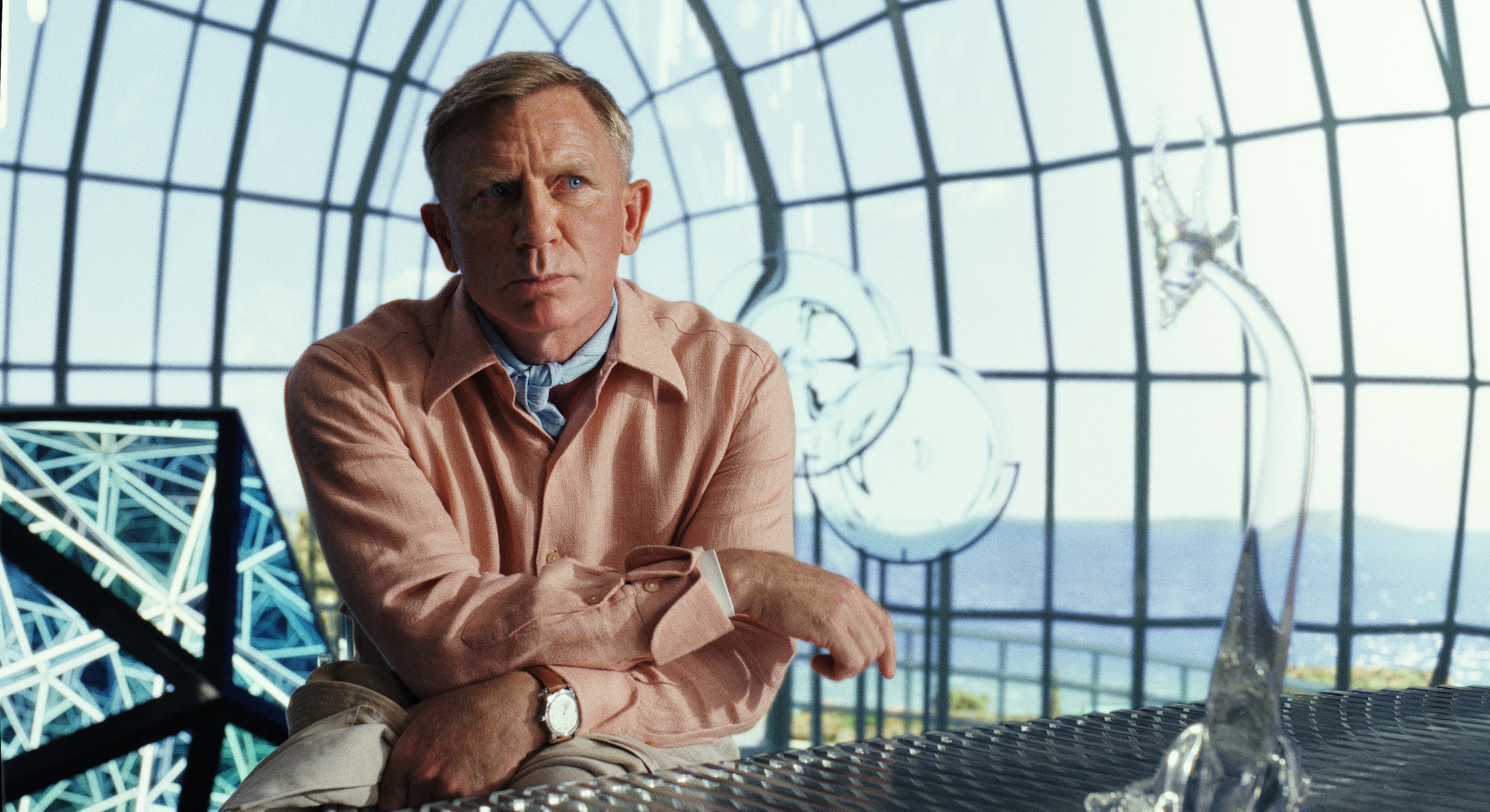 Rian Johnson’s delectable 2019 whodunnit Knives Out wasn’t the last memorable movie before COVID-19 changed everything. But it was maybe the last time we had fun.

A modern take on Agatha Christie mysteries, Knives Out had all the makings of an instant classic. Propped up by a cozy autumnal aesthetic that inspired deep Pinterest envy — especially Chris Evans, whose distressed fisherman sweater became a menswear must-have — the film made a full-calorie meal of its A-list cast, zesty writing, and affectionate filmmaking by a director so clearly enamored with Christie’s works. And its satire of a family of vultures pecking over a fat inheritance made its Thanksgiving release window an especially clever masterstroke.

Glass Onion: A Knives Out Mystery, out in theaters November 23 and Netflix on December 23, is an electric standalone sequel by writer/director Rian Johnson with nearly all of the same bugs and features of his predecessor, albeit with new flavoring. Gone are the auburn hues and coffee-in-the-rain aromas of New England in fall, in are the blue skies and sunkissed hard bodies of a Greek isle getaway. Also gone is the dysfunctional family stuck on the financial teat of a wealthy patriarch. Instead, there’s dysfunctional friends caught in the imbalanced power scales of a sociopathic tech billionaire, played by Edward Norton.

While essentially a repackaged Knives Out, Glass Onion — a title alluding to false complexities that one can still “see through” — stands on its own feet thanks to riotous performances, gorgeous production design (captured beautifully by Johnson collaborator Steve Yedlin), soon-to-be-memorable motifs and zingers, and its own enthralling mystery replete with juicy drama. It’s stylish and hilarious enough to overpower its weakest elements, namely a roundabout plot that is almost dizzying. Still, there’s undeniable joy to be had in bearing witness to shallow, cutthroat creatures stuck in a Mexican standoff of finger-pointing and name-calling.

Set in the early days of the pandemic in 2020, Glass Onion’s wealthy giant is Miles Bron (Norton), an eccentric Elon Musk-like figure living on his own private Mediterranean island. Seeking to spice up quarantine, Miles invites his inner circle for a weekend murder mystery. Guests include a scientist employee (Leslie Odom Jr.); his ex-business partner (Janelle Monáe); a Connecticut governor (Kathryn Hahn); a supermodel turned designer (Kate Hudson) and her flummoxed assistant (Jessica Henwick); and an alpha fitness influencer (Dave Bautista) and his girlfriend (Madelyn Cline). But an invitation somehow ends up in the hands of Benoit Blanc, the famed gentleman detective.

Reprising his role from Knives Out, Daniel Craig is back as the absorbing Benoit, once again sporting his ceaselessly entertaining non-rhotic Louisiana drawl and enviable wardrobe. Eschewing the effortless enigma that made Benoit feel like Bond’s American cousin, Benoit in Glass Onion has a clumsier demeanor and gee-shucks, glad-to-be-here air to him. Glass Onion is the perfect blank canvas for Craig, a dignified actor who is secretly brilliant at playing a buffoon. From his appearance in SNL to a recent vodka ad, Glass Onion is finally affording Craig space to let his crew cut hair down. But this surface texture only betrays his razor-sharp competence as an investigator, which hasn’t dulled since Knives Out.

Neither has Rian Johnson dulled as a director, even if his boldest choices don’t feel as pinpoint-sharp as they have in the past. Johnson again plays with point-of-view and biased perspectives as he did in Knives Out. The filmmaker expands his storytelling in maximalist fashion with Glass Onion, caking on layers of complexity at the cost of coherence. It’s not that Glass Onion is hard to follow per se, but keeping up can be its own distracting puzzle. Knives Out remains a fun watch because there’s enough to latch onto without the experience feeling like homework. For whatever reason, Glass Onion is compelled by bigger, and occasionally tiresome, ambitions. It’s only when Johnson finally hits the gas in the second act does Glass Onion find any real forward momentum.

The ongoing expansion of Benoit Blanc is exciting, to be sure. Finally, our modern, plugged-in, doomscrolling generation has our own Hercule Poirot: an eccentric, ultra-skilled detective who can drop into any story and setting and still unmask a universal truth. Across both Knives Out and Glass Onion, Benoit has immersed himself in cases where greed violently severs interpersonal bonds. The participants in these whodunnits come across as shallow clowns, blind to the fact that it’s only the connections we make that foster a life that’s worth living.

It’s fascinating, if woefully hollow, how Glass Onion plops into the still-fresh bleakness of Covid, a time of widespread reassessments of priorities. Glass Onion ironically doesn’t interrogate the evergreen hunt for wealth with the zeitgeist specificity of 2020 too much in its text (which, again, speaks to Johnson’s bizarrely noncommittal craftsmanship this time). But as we return within orbit of the stalwart Benoit Blanc, whom we first met just before the world became abruptly scarier, we’re only reminded of how far we’ve gone, and how little we’ve changed.

Glass Onion: A Knives Out Mystery is out in theaters on November 23 and Netflix on December 23.