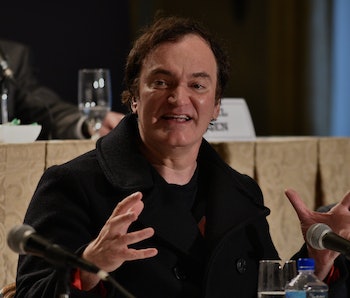 This week’s release of director Quentin Tarantino’s eighth film, the conveniently titled The Hateful Eight, is a big deal. Not just because Tarantino is unveiling his newest creation in a massive 70mm format not seen on movie screens for 40 years, and not because the project returned from the dead after the director threatened to scrap the movie altogether when the first draft of his script leaked. No, The Hateful Eight is significant because it’s a big turning point for the writer/director. He’s spent his entire career mining old movies and improving upon them to create a genius filmography predicated upon a sort of hyper-literate cinema mashup mentality. Tarantino created his own brand with his other movies. But The Hateful Eight goes above and beyond that: It is the ultimate Quentin Tarantino movie.

The Hateful Eight is a standard Tarantino set up filled with reprobates of every color. Years after the Civil War in remote Wyoming, a blizzard halts bounty hunter John Ruth (Kurt Russell), who’s trying to bring his prisoner, wanted murderer Daisy Domergue (Jennifer Jason Leigh), into the town of Red Rock to collect a reward. Along the blustery road, their stagecoach meets another potentially stranded bounty hunter, former Union soldier Major Marquis Warren (Samuel L. Jackson). Eventually they also meet up with a former Confederate soldier named Chris Mannix (Walton Goggins). Both need transportation to the nearest shelter before the blizzard arrives, so Ruth, who trusts none of them, reluctantly agrees to bring them to safety while fearing they might be in cahoots with Domergue.

Soon the coach arrives at a roadhouse called Minnie’s Haberdashery, where the four characters and their driver, named O.B. (James Parks), plan to wait out the storm. Once inside they meet four strangers: Bob (Demián Bichir), who’s supposedly minding the place while the titular Minnie is away; Oswaldo Mobray (Tim Roth), the city of Red Rock’s new hangman; Joe Gage (Michael Madsen), a tight-lipped cowpoke who says he’s on his way to visit his mother; and General Sanford Smithers (Bruce Dern), a former Confederate officer who doesn’t take too kindly to Warren’s reputation for terrorizing Southern soldiers during the war and after.

This, unfortunately, is all set up, and doesn’t begin to describe the linguistic mind games and the delightfully claustrophobic absurdity of what Tarantino hath wrought. One of the biggest complaints against Tarantino is that most of his films — with the exception of maybe Death Proof — lack a kind of propulsive action typically found in Hollywood productions. He wants you to listen to what people have to say instead of having the chit chat being a mindless diversion. People expect something outside of the dialogue to happen that carries the dialogue. In Tarantino movies, the dialogue carries the actions. Any shootout or robbery or raid on a French theater showing Nazi propaganda films are more often than not secondary to what is being said, or a direct protraction of the words his different characters utter.

In The Hateful Eight, this happens writ large. The entire movie is like a feature-length version of the opening scene from Inglourious Basterds. It’s a completely sustained, three-hour Mexican standoff. It’s a Reconstruction-era linguistic stalemate or tete-a-tete. Audience members expecting a large-scale Western like Django Unchained will be sadly mistaken, since the first half of the movie is basically characters just talking to each other, while the near entirety of The Hateful Eight becomes a chamber piece all within the confines of Minnie’s Haberdashery. Potential viewers will likely be scared away from this possibility, but they shouldn’t. The Hateful Eight is a perfect distillation of what makes Tarantino movies good.

Despite the obvious spaghetti Western tropes — right down to Ennio Morricone providing the score — it’s the first time that Tarantino completely uses himself as an influence. It isn’t simple paint-by-the-Tarantino-numbers, and it isn’t entirely a meta-commentary on himself. He becomes his own reference point to build something new onscreen. This is the case whether it’s reusing people from his normal troupe like Samuel L. Jackson (in a performance whose badass-ness rivals his own turn as hitman Jules Winnfield in Tarantino’s Pulp Fiction) or on a basic thematic level.

Tarantino has a penchant for resurrecting stars, but here Tarantino literally resurrected the movie from self-imposed obscurity into existence. Tarantino’s credit in the opening credits proclaim it “The 8th Film by Quentin Tarantino,” and the self-referential glee rolls out from there. He once again throws a ragged band of unsavory types together by circumstance, like Reservoir Dogs or Pulp Fiction or Jackie Brown or, well, you get the picture.

There are chapters that shift times and settings to give you a better sense of what was being said, who said what or saw what, and whom is lying to whom. In the 70mm roadshow version, Tarantino himself even interjects (as he did in a few of his other movies) as the narrator following the movie’s brief intermission, as if to welcome you back and make sure you know what you’re getting yourself into.

The Hateful Eight is a shift in Tarantino’s cinematic power. He’s done with simply pulling from other sources and putting his own spin on things. It’s an organic progression, and one that has come to the point where he’s not regurgitating his old ideas, but using them as a bloody, foul-mouthed springboard to create movies unlike anybody else out there. There’s nothing to hate about that.