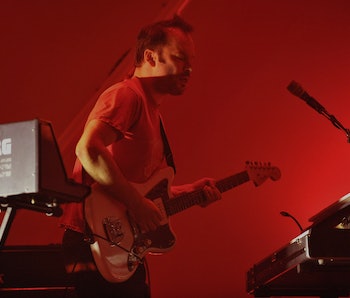 After learning that comedians Bill Hader and Ben Schwartz provided the voice cuddly new droid BB-8 in The Force Awakens, today comes news of another new previously unknown addition to the cast. But don’t expect this new cast member to have an illustrious movie career or a long IMDB page. It seems Nigel Godrich, best known as the music producer on Radiohead classics like OK Computer and Kid A, is in The Force Awakens playing a stormtrooper with the call sign FN-9330.

Godrich’s masked cameo in the new movie, presumably somewhere in the background of all that stormtrooper action, came to light when musician Four Tet humorously tweeted at Godrich congratulating him on his performance. Later, after the tweet was noticed and reported on by music site Stereogum, Shaun of the Dead and The World’s End filmmaker Edgar Wright tweeted at them and confirmed that he was the one responsible for getting Godrich the gig. Godrich previously worked on the music for Wright’s woefully underrated 2010 film Scott Pilgrim vs. the World.

There’s no word on whether Thom Yorke, Jonny Greenwood, or any other members of Radiohead are in the movie either. Greenwood is probably too busy hanging out with PT Anderson to be bothered by Star Wars, though we can’t help but love the potential image of Yorke making an appearance in the background somewhere as an evil First Order officer.

Godrich is also a member of the band Atoms for Peace, the so-called supergroup with members of Radiohead, Red Hot Chili Peppers, Beck, and R.E.M., among others.

Instead, Yorke and co. will just have to be the current dark lords of sad rock music. Imagine the opening credit crawl set to this music: