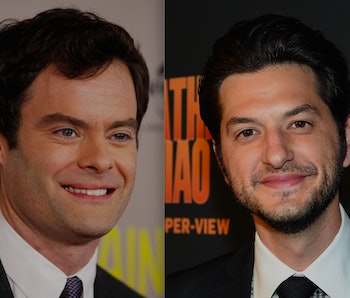 The movie may be open in only a few days, but let’s not forget that as recently as April 29, 2014, the new cast of The Force Awakens was announced with much pomp and circumstance.

There were two names that have been conspicuously absent from any casting talk until now: Former SNL member Bill Hader and former Parks and Recreation star Ben Schwartz. Maybe they haven’t been in the casting chatter because they don’t actually appear in the movie at all.

Drew McWeeny over at Hitfix was one of the lucky folks to get to see the world premiere of the movie on Monday in Hollywood, and unlike the rest of his nerdy brethren who booked it from the theater to share their non-spoiler Star Wars reactions, he stayed to read the credits and saw that Hader and Schwartz were listed as “BB-8 Vocal Consultant.”

McWeeny caught up with Hader to ask the comedian about it, who explained that his own role in the new movie consisted of “”J.J. fucking around with this sound effects app on his iPad that was attached to a talk box operated by me,” he said. “It looked ridiculous but it made BB-8’s voice. At first I tried doing a voice, but we all agreed it sounded too human.”

It’s not clear how much of Hader or Schwartz’s vocal talents ended up informing the final sound effect for the little droid in The Force Awakens, but it seems like Abrams and co. wanted to imbue BB-8 with a little humanity. This is a slight upgrade from the way legendary sound designer Ben Burtt created R2-D2’s voice for the original trilogy. To get the emotive beeps and boops for Artoo, Burtt performed baby coos and ran the recordings through a synthesizer while looping them together with the familiar beep noises.

This also shouldn’t be a surprise to Force Awakens fans either. Abrams has been known to invite collaborators in without letting anyone know. It was recently revealed that Broadway composer Lin-Manuel Miranda contributed new music to Star Wars to a scene, while Star Trek actor Simon Pegg has a cameo as well.

What is surprising is that the guy who played Fear from Inside Out and got into all of New York’s hottest nightclubs as Stefon from SNL could also be the voice of everyone’s new favorite droid.