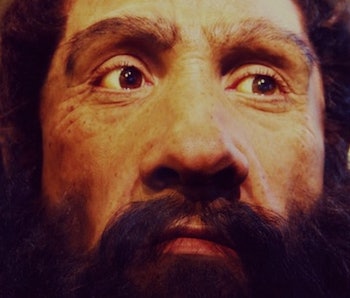 Ok, that might be a bit presumptuous of me. It might just be a lousy, no-good morning for you. No-good mornings are normal. You don’t need to feel happy all the time. You can feel bad or just fine, and that’s entirely okay.

If you’re feeling no-good for a long period of time, that might mean you are experiencing depression. That’s also okay and very, very common. Depression is on the rise, especially among teens girls. Like all mental health conditions, depression can manifest differently for everyone, which also means that people need different treatment options.

So onto the good news:

I’m Greta Moran, your interstellar guide to all of Inverse’s latest science and technology stories at Inverse Daily.

“I absolutely do not believe that these living machines have consciousness.”

— Harvard philosopher and bioethicist, Jeantine Lunshof, on robots and ethics.

There’s been a lot of debate over the years on the fine line between life and robots. A recent development makes that line even murkier. In a joint effort between the University of Vermont and Tufts, researchers used frog stem cells to build “living machines” which can have a variety of purposes — from biodegradable, drug delivery bots to pollution-cleaning bots.

It’s still a work in progress. For instance, the bots were not able to flip themselves over when turned on their backs. Despite this minor design flop (pun very much intended!), a paper published on Monday demonstrates that this concept itself is sound. So, expect more developments in this area soon.

What’s the future of depression treatment?

In a special issue of the Harvard Review of Psychiatry, researchers and physicians are sketching the future of depression treatments, arguing current approaches aren’t doing enough. An “unacceptably high proportion” of people with depression don’t benefit from standard treatments like SSRI’s and psychotherapy — and when they do, improvements can be short lived, the scientists say.

To create a world where more people get the help they need, the authors encourage digging into depression’s gender gap, the gut-brain connection, opioid signaling, positive behavior change, and health tech. Driving research in each of these areas could break open new ways of treating the age-old, devastating problem of depression.

Consequences of ancient Neanderthal sex and how it has affected humans

Long ago, there were at least nine human species. Now, there’s just us. However, evidence of some of these former Earthlings is presently buried in our DNA. That’s because anatomically modern humans aka Homo sapiens at times mated with Neanderthals and Denisovans. The percentage of Neanderthal DNA is about 1 to 2 present in people of European or Asian background, while Denisovan DNA is highest among Melanesians, lower in Southeast Asian and Pacific Islander populations, and undetectable in other parts of the world.

These inherited genes influence our health and behavior, reports scientists in a new study. In turn, that likely means that these genes could be a major driver of adaptive evolution in humans. Through the use of new computational tools, the team determined that the gene flow between archaic and living humans affects modern-day human metabolism, our responsivity to pathogens, and a scattering of neuronal traits.

One of the most striking findings is that the finding the presence of introgressed mutations in Papua New Guineans that are potentially linked to response to malaria. These mutations were linked to Denisovan ancestry. Meanwhile, more research is needed to know how the presence of genes influences the manifestation of health.

How did life originate on Earth? Scientists have been trying to unlock this mystery for almost as long as there was, well, life. But now, new research provides a piece of the puzzle as to how living microorganisms began sprouting on Earth and creating life as we know it.

A team of scientists traced the origins of phosphorus, a chemical element considered to be one of the most crucial building blocks of life. The scientists discovered phosphorus-bearing molecules in star forming regions, which may have then formed planetary bodies such as comets. As these comets crash landed on Earth during the planet’s infancy, they may have carried phosphorus with them and thus resulted in the origin of life.

The study used data collected by the ALMA radio telescope which peered into a nearby star-forming region, combined with data from the ROSINA orbiter which collected data from an inner Solar System comet over the course of two years. Although the new study does not present the full picture of how life began on Earth, it does provide one important part of the puzzle by tracing the journey of one of life’s key chemical elements.

There are lots of ingredients that long-term memories need to thrive, like deliberate practice andsleep. Scientists may be on the brink of identifying another crucial ingredient for memory consolidation. An early-stage fruit fly experiment suggests that light is essential for the formation of long-term memories. This is clearly a far-cry from demonstrating the same concept in humans, but so far their research presents an intriguing concept.

In the experiment flies were exposed to seven hours of straight sexual rejection by “unreceptive females.” After that experience they were supposed to have “learned” that pursuing virgin flies was a more prudent strategy. However, when flies were kept in total darkness, the team found that their ability to maintain that strategic memory was “severely” impaired compared to flies kept in normal light dark cycles.

Ultimately, the team believes that a light-sensitive peptide called “Pigment dispersing factor” may play a crucial role in enabling gene transcription related to the formation of long term memory. There’s a similar light-sensitive in mammal brains called “Vasoactive intestinal peptide,” which suggests that the same effect may be true in mammals — though the jury is still out on that.

As you may have noticed, this week, Inverse has published a lot of stories about mental health and medicine. It’s especially important in a time when the world is dealing with the biggest public health crisis we’ve ever seen: the climate crisis. A new study published in the journal Nature Medicine found that as temperatures rise, there could also be a rise in suicides, car crashes, and other forms of injuries (both accidents and intentional violence).

Scientists often warn of the consequences of temperatures rising by 1.5C above pre-industrial levels. Under that scenario, the study estimates that such a temperature rise could lead to to 1,601 more injury-related deaths in the United States annually. This adds to our growing body of knowledge on all the ways climate change is impacting our health. Stay tuned for more updates on this important connection.

Thank you for reading, and if you have a suggestion for how to make this newsletter better, just hit reply to this e-mail.