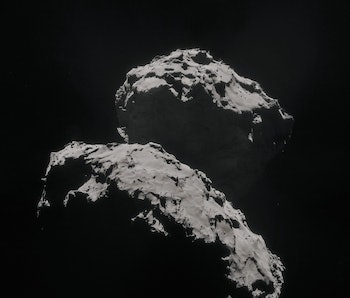 Around 3.5 billion years ago, life began to sprout on a fairly quiet, desolate planet we call Earth. Tracing the origins of life, and how molecules combined to create microbial life, is perhaps the most pressing question that scientists have yet to answer.

At the heart of this pursuit is a hot debate: Was life was created on Earth? Or was it transported to our planet from the larger cosmos surrounding us? To solve the mystery, scientists must first trace the origins of the chemical elements that make up life as we know it. And now, they may have done just that for one crucial ingredient in the recipe for biology.

In a study published Wednesday in the journal Monthly Notices of the Royal Astronomical Society, scientists announce they have detected the origins of one of the most vital building blocks of life — phosphorus. Their work inches us one step closer to unlocking the mystery of life on Earth, and how chemicals formed in stars ended up on our planet.

The paper details how phosphorus-bearing molecules formed in star-forming regions, and how it may have been delivered to Earth onboard rocky comets during our planet’s infancy.

“It is still a mystery how phosphorus became available on early Earth,” Victor Rivilla, researcher at Italy’s Arcetri Astrophysical Observatory and lead author of the study, tells Inverse. “Our work has shown that a significant amount of phosphorus is already available in the first stages of the formation of stars and also in the initial ingredients of our Solar System.”

Phosphorus: Where does it come from?

Phosphorus is key to life on Earth, and all living beings depend on it.

But how phosphorus came to be here on Earth was a mystery. Using data from the Atacama Large Millimeter/submillimeter Array (ALMA), a radio telescope in the Atacama desert in Chile, the researchers zoomed in on a star-forming region in our galaxy known as AFGL 5142.

AFGL 5142 is located in the Perseus Arm, one of two major spiral arms of the Milky Way galaxy, around 6,400 light years away from our Sun.

By observing the clouds of gas and dust that form young stars, the team observed phosphorus-bearing molecules being created alongside the creation of massive stars.

As the stars form, flows of gas open up cavities in the gas clouds between stars. The shock and radiation emanating from the birthing process creates phosphorus molecules along the walls of these cavities.

“This enriched material can then form new stars and planets, which will contain phosphorus in the form of different molecules,” Rivilla says.

To trace the journey of these molecules from interstellar space to Earth, the researchers turned their attention to 67P/Churyumov-Gerasimenko, a comet that periodically passes through the inner Solar System.

The Rosetta Orbiter Spectrometer for Ion and Neutral Analysis, which launched in March, 2004, orbited the comet for two years, collecting data on its origins and chemical make up — revealing that it carried phosphorous.

By combining the two data sets, the study suggests that phosphorus is formed within the gas clouds of star-forming regions like AFGL 5142 and become part of new, young stars. Should these stars form a solar system around them, then phosphorus becomes part of other planetary objects in the system, including comets.

“The new ROSINA observation we present showed that phosphorus was locked on the dust grains that formed the 67P comet since before the formation of the Sun,” Rivilla says. “So we are actually seeing the initial ingredient of our own Solar System.”

If comets similar to 67P crash-landed on Earth billions of years ago, they may have carried phosphorus-bearing molecules along with them. Those tiny seeds may have contributed to the origin of life on Earth.

Kathrin Altwegg, a planetary science professor at University of Bern in Switzerland, and co-author of the study, compares the origin-of-life story to a puzzle that scientists are slowly putting together, like a giant cosmic jigsaw.

“This is at least one more hint,” Altwegg tells Inverse. “We know how many comets actually hit the Earth and from this we can deduce how much organic material has been delivered, and now we also have the phosphorus.”

More like this
Science
5.10.2022 5:00 PM
Engage! NASA prepares the Webb Telescope camera that will find new alien worlds
By Doris Elín Urrutia
Science
5.11.2022 8:15 PM
An ultra-bright nova hid an elusive new phenomena — but astronomers caught it in action
By Kiona Smith
Science
5.4.2022 8:00 PM
Astronomers find a puzzling parasitic object — is it a black widow pulsar or something else entirely?
By Charles Q. Choi
Related Tags
Share: