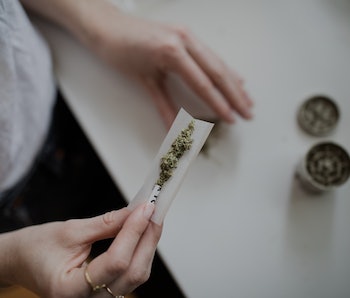 Legal weed has opened the bedroom door to people looking to combine cannabis and copulation, but scientists still aren’t sure what those people will find. Though there’s plenty of anecdotal evidence that weed can make sex more enjoyable, there isn’t much scientific data about its actual role in the bedroom. The most recent discovery in the field turned up great news for ladies who like weed and good orgasms.

“We found that they thought that, for the most part, sexual satisfaction was improved, orgasm was improved, desire was improved, no change really in lubrication, and pain was better,” Lynn tells Inverse.

Her data came from the self-reported surveys 373 patients filled out in her sexual health clinic between March 2016 and February 2017 (before Missouri voted to legalize medical marijuana). They included questions about sexual satisfaction as well as marijuana use, designed to generate data to investigate what Lynn had heard from her patients.

“There Really Was a Lack of Scientific Evidence”

As a doctor who specializes in treating sexual problems in women like low libido, painful sex, and orgasm issues, Lynn was curious about what her patients told her about marijuana.

“I noticed that women would come to me with the problem, and they would say, ‘Oh, and by the way, if I smoke marijuana, it gets better,’” she says. In particular, one patient said she went to Colorado specifically to buy a marijuana-laced lube. “She’s actually the one who kind of sparked my interest in all of this,” says Lynn.

"Oh, and by the way, if I smoke marijuana, it gets better."

She launched this study because there “really was a lack of scientific evidence” regarding women’s sexual satisfaction and marijuana despite numerous articles on the internet saying “it’s great, it fixes everything,” she says.

A Small but Growing Field

This study is a small one and doesn’t show causality, but Lynn and her co-authors note they’re consistent with the findings of the few other studies on marijuana and sexual behavior in women. In particular, they call attention to a paper published in Psychology and Sexuality in 2018, in which 53 percent of young adult marijuana users reported increased sexual enjoyment, and 44.9 percent said they had increased orgasm intensity. In that study, 38.6 percent of the respondents were women.

In 2017, Stanford University researchers became the first to report on an increase in male and female sexual frequency linked to marijuana use, drawing their conclusions from self-reported survey data from over 50,000 Americans.

So far, scientists haven’t studied how marijuana use makes sex more satisfactory, but some have made a few educated guesses. As the team notes, it may be that marijuana lowers stress and anxiety; that it causes the perception of time to slow down, prolonging pleasure; or that it lowers sexual inhibition and boosts confidence in the bedroom. In addition, marijuana tends to heighten the senses, potentially making sex an even more stimulating experience. One study published in 2016 even suggested that marijuana users have more sex because the illegality of it was a turn-on.

“The likely answer is it’s a compilation of all of the theories,” says Lynn.

The team acknowledges this is a small study that relies on self-reported data from mostly white, heterosexual women, so the findings don’t exactly extend to the general public. But in the little-studied realm of marijuana and sexual behavior — and the arguably even less-acknowledged field of women’s sexual enjoyment — the data are valuable, if only because they indicate a need for deeper research.

“We need research before we can say, ‘Oh yeah, go out and do this!’ because we just don’t know,” she says.

One of the reasons we might lack research in this realm is because women’s sexual health “gets pushed under the rug,” as Lynn puts it. “If you’re a woman and you like sex, then it’s, ‘Oh, you’re a slut,’ and I feel like a lot of women have sexual issues who are afraid to come forward and talk about it, or they don’t know who to talk to about it.”