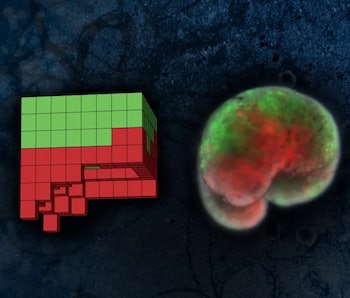 Why build a machine out of plastic or metal when you can build it out of DNA? This question may set off ethical alarm bells, but for the first time, scientists are reporting they’ve done just that.

In a joint effort between the University of Vermont (UVM) and Tufts, scientists have taken a page from Dr. Frankenstein’s field guide and used frog stem cells to build millimeter wide “xenobots” that researchers are calling “living machines.” The research is being presented as a way to create biodegradable drug delivery bots.

“Robots are so good at chess and playing video games but, aside from a Roomba that kind of slithers along on a flat surface, we don’t have robots that are dynamic and adaptive,” says Kriegman. “Robots built out of traditional materials might be limited.”

The research, published Monday in the journal Proceedings of the National Academy of Sciences, describes a joint approach to creating living machines that make use of both complex computer models as well as biological expertise.

The team first worked on developing and modeling designs for these bots on UVM’s Deep Green supercomputer cluster, which has the power of 20,000 laptop computers working in unison, using what’s known as an evolutionary algorithm.

Essentially, the team went through a trial-and-error process to design bots that would be optimized to their study’s task (aka, moving forward autonomously.) Similar to natural selection, designs that performed worse were cut from the team and better designs continued to be retested and further developed.

After the team at UVM landed on a handful of optimized models for their trials, the information was handed off to biologists at Tufts.

From there, the Tufts team began assembling the machines. African frog stem cells were incubated, harvested, and then delicately joined together using forceps and an electrode to match the designs created by the UVM team. Once assembled, the bots’ biology took over.

As predicted by their model, these living machines were able to propel themselves along through a watery testing medium using contractions from frog heart cells the team had cultivated for days or weeks at a time. The scientists write that this initial success bodes well for their future potential as biodegradable, drug delivery bots.

But, they’re not without their limitations. Like turtles, the bots were unable to move when flipped over on their backs.

While Kriegman emphasized to Inverse that the results of this paper are still merely a proof-of-concept, he says he’s excited about all the possibilities this research could bring in the future — from drug delivery with the bots’ made from a patient’s own cells to bots with added sensory organs and stomachs that can attack cancer cells or clean-up plastic pollutants in lakes. Kriegman says there’s also a potential future where the designs are scaled so large that they may need additional scaffolding to function, or as we more commonly think of it: bones.

And, while they’re not the first team to create a biobot, Kriegman says that their computational approach sets them apart. Instead of mimicking humans or animals, their algorithm simply searched for the best design to complete its task.

But, the success of these trials also raises some potentially uncomfortable questions about the definition of “living” and whether or not these machines could be ascribed any form of rights or consciousness.

For the time being, Kriegman says these living machines are little more than “walking caviar,” but that he agrees its important to begin having those conversations as soon as possible with research like this.

" I think once they start getting intelligent or physically adept enough, we have to have a conversation

“Even with synthetic robots, I think once they start getting intelligent or physically adept enough, we have to have a conversation [about ethics] and we might as well start thinking about it now,” says Kriegman.

But as far as Harvard philosopher and bioethicist, Jeantine Lunshof, is concerned, there’s no cause for immediate concern she tells Inverse.

“What is consciousness? That is far from clear and even different disciplines have different opinions on this,” says Lunshof. “I absolutely do not believe that these living machines have consciousness.”

Lunshof, a self-described “consciousness skeptic,” continued to say that just because something is living does not mean it necessarily has consciousness. And as for rights, Lunshof tells Inverse that bodily rights aren’t even agreed upon for all humans and animals, let alone synthetic or bioengineered robots.

Going forward, Lunshof says the ethical questions won’t arise from a pure increase of scale (after all, she tells Inverse, no one questions the consciousness of an 80 kg cabbage plant) but instead from an increased level of human-like brain structure and functioning. Until then, she’s not too worried.

Hank Greely, a professor of law at Stanford University and chair of the Steering Committee of the Center for Biomedical Ethics, agrees and tells Inverse that while the current research is far from creating anything human-like, they should still keep such ethical questions in mind.

“Each application should be subject to regulatory review and oversight and stand or fall on the balance of its benefits and its risks,” says Greely. “We have engineered many life forms over the millennia, from dogs to wheat, and in a less understood or controllable way.”

As for Kriegman, he tells Inverse he’s excited to continue pushing the boundaries of this research — within limits.

“My philosophy about science is that everyone should be doing all kinds of different things and just exploring — while [still] considering the ethical ramifications and repercussions of their actions,” says Kriegman. “But I do feel like we should be trying as many different things as possible. And this is a new way to build robots, so who knows what will happen.”

Living systems are more robust, diverse, complex, and supportive of human life than any technology yet created. However, our ability to create novel lifeforms is currently limited to varying existing organisms or bioengineering organoids in vitro. Here we show a scalable pipeline for creating functional novel lifeforms: AI methods automatically design diverse candidate lifeforms in silico to perform some desired function, and transferable designs are then created using a cell-based construction toolkit to realize living systems with the predicted behaviors. Although some steps in this pipeline still require manual intervention, complete automation in future would pave the way to designing and deploying unique, bespoke living systems for a wide range of functions.