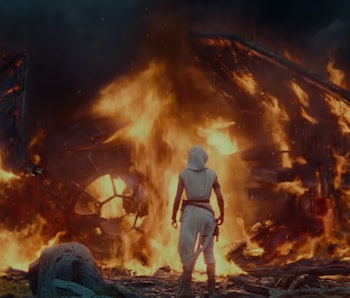 One of the biggest twists of Star Wars: The Rise of Skywalker might be even bigger than we think. Fans of the cartoon series Star Wars Rebels may have noticed a familiar voice — confirmed in the Episode IX credits — that could confirm Rey isn’t the only surviving Jedi in the galaxy.

And no, we’re not talking about Finn.

Full spoilers follow for Star Wars: The Rise of Skywalker.

In the final confrontation, Palpatine claims that all of the Sith live inside him. He wants Rey to kill him in a ritualistic way so that his spirit can possess her. But once he realizes that he can regenerate himself by draining the energy from Rey and Ben Solo’s “dyad” Force bond, he uses that to replenish himself instead. Just when you think Palpatine might win, a myriad of dead Jedi encourage Rey and infuse her with their Force ghost power.

Must Read: “Every Jedi voice at the end of Star Wars: Rise of Skywalker, explained”

The full list of characters featured is telling, however, because it includes actor Freddie Prinze Jr. as Kanan Jarrus, who died towards the end of Star Wars Rebels, but it does not include his apprentice Ezra Bridger (voiced by Taylor Gray).

The last we saw of Ezra in the Rebels Season 4 finale, he had used the Force to summon a group of space whales called Purrgils to the planet Lothal to help combat Thrawn and his Imperial blockade. (This happens around the same time as A New Hope.)

Ezra was aboard a ship with Thrawn when the Purrgils jumped into hyperspace (yes, that’s a thing they can do) with the vessel in tow. Therefore, Ezra was dragged through hyperspace to an unknown destination in the distant reaches of space. He could be just about anywhere in the galaxy or even somewhere beyond. In the show, this is presented as a huge sacrifice that feels a lot like his death, but the fact remains that we never found out if he was really alive or dead.

But now we do.

For The Rise of Skywalker to include the voice of Kanan Jarrus and Ahsoka Tano but not Ezra means that Ezra simply hasn’t died yet. Otherwise, why would some characters but not others be included? The only thing in common every other Jedi that spoke had was that they’re dead. In the official Star Wars timeline, Ezra would only be about 54 years old at the time of Episode IX.

At Star Wars Celebration 2019 in April, Rebels creator Dave Filoni fielded questions about a potential Season 5 and the fate of Ezra. “I can’t talk about that,” he responded during a Q&A portion of the panel. (That’s probably because of this Rise of Skywalker spoiler.) Filoni has said before that Rebels got its definitive ending, and the Season 4 epilogue provides enough closure to make it seem like Season 5 isn’t a possibility.

Filoni is an executive producer The Mandalorian Season 1 and Season 2, along with Star Wars: The Clone Wars Season 7, so he has plenty to work on outside of more Rebels. At least we can take this as confirmation that Ezra survived, but what happened to him after? Will we ever know?

Maybe there’s a place for this lost Jedi in the next wave of Star Wars movies.

Star Wars: The Rise of Skywalker is now in theaters.