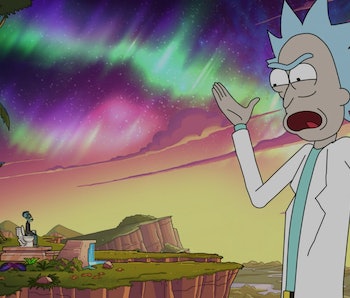 A huge part of Rick and Morty’s enduring charm is its snappy writing and the sheer number of jokes per minute. It’s no surprise that the Adult Swim cartoon is so damn quotable, and Season 4 is no exception — though it’s yet to produce anything as monumental as Morty’s “Nobody exists on purpose” revelation or Dr. Wong’s indictment of Rick’s harsh perspective on therapy during the “Pickle Rick” episode.

Still, Rick and Morty Season 4 has produced plenty of great lines we’ll no doubt be repeating years from now. We’re still just halfway through the current season, but here are the nine funniest and most memorable quotes from Season 4 so far.

The following quotes contain spoilers for Rick and Morty Season 4 and involve mature language and themes.

8. When Jerry was too stupid to get Rick’s Star Wars joke

Jerry: “I’m man enough to simply say, ‘I’m going to poop,’ and I’d be honored to have Ron Howard involved.”

Rick offers up a decent joke in the cold open to “The Old Man and the Seat,” but it’s this follow-up joke that Jerry says that really hammers the point home. This entire episode is about how Rick is a shy pooper and how shy poopers are all depressed people trying to exert some small measure of control over their existence. The first joke is a much simpler one.

“Now, if you’ll excuse me, I’ve got a quick solo adventure to go on, and this one will not be directed by Ron Howard!” Rick announces. Summer recognizes that it’s code for pooping

Once upon a time, Chris Miller and Phil Lord were supposed to direct Solo: A Star Wars story before they left and/or were fired. Director Ron Howard took over after, but the end result was perhaps the most maligned Star Wars movie ever.

Translation: Rick is trying to imply that Solo is literal shit, and Jerry not getting the joke elevates a decent joke to something special. Jerry, ever the idiot, is trying to one-up Rick and assert some feeble measure of dominance. But the end result is that he makes himself look like a fool who doesn’t understand that Ron Howard has nothing to do with pooping.

7. When Tony had a preferred conference room to die in

Rick: Where do you want to die?

Imagine being so miserable that when someone asks you where you’d like to die, you don’t hesitate with the answer, and it’s a conference room. Beyond that, you still even retain the courtesy to politely ask the administrative assistant if the room is available!

Rick spends the first half of “The Old Man and the Seat” tracking down the mysterious stranger who used his private toilet for pooping, using almost nonexistent evidence. The investigation leads him through a robot uprising to a quiet white-collar office worker named Tony, a depressed widower who perhaps had a death wish when he knowingly pooped in Rick’s toilet. This oft-quoted line from Season 4 really captures the nihilistic humor that Rick and Morty fans love.

Tony: You need the same thing I needed, Rick. You need someone to give you, permission to live. … You know what shy pooping is, Rick? It’s a pointless bid for control. You want to take the one part of life that you truly think is yours, and you want to protect it from a universe that takes whatever it wants. It took my wife. It clearly took something from you. We can spend our lives fighting that, or we can choose to be free.

Between this moment and the depressing but poignant final scene, “The Old Man and the Seat” is probably the best from this first half of Season 4. The best Rick and Morty insights into the human condition are framed around a ridiculous premise like Rick transforming into a literal pickle before twisting that premise into something deeply human and relatable. In this case, it’s about analyzing how a shy pooper is this way due to a certain kind of emotional insecurity.

How much of our behavior is determined by this kind of insecure attachment, to our fear about what can happen when the universe is in control?

5. Rick gets sassy when talking about dragons

Summer: Are you gonna slay it?

Rick: First off, I always slay it, queen. Secondly, yes.

There’s something exquisite about the way this scene is framed from Summer’s perspective looking up at Rick when he gets annoyed at Morty’s new pet dragon during “Claw and Hoarder: Special Ricktim’s Morty.” Rick had promised Morty a dragon if he helped on an adventure we catch the end of, but when the dragon lazily belches up a huge swath of flame through the floor of the living room, Rick’s had it.

“That’s the end of the ‘Morty gets a dragon episode’!” he says. Summer, in the perfect signature blend of petty annoyance and genuine wit, asks if he’s going to slay it. Rick, inexplicably in tune with how youngsters like to slap “queen” on the end of phrases, doesn’t skip a beat in his response that’s equal parts surprising and hilarious.

Summer: Aw, why can’t couples that start out cheating ever end up happy?

At the start of the episode when Rick first buys Morty the dragon from the wizard, Summer makes a snide comment that it’s her “first gay wedding,” a joke that resurfaces over and over again in the episode. After Rick accidentally soul-bonds with Balthromaw and Morty rips up the original contract, the beast is deemed a “slut dragon” by the wizard of Dragonarchy and taken away to be hung. Rick and Balthromaw bicker immediately once they free the dragon, and that’s when Summer drops this hilarious, savage remark.

2. When the Snake Terminator was terrifying AF

“My appearance is designed to be familiar and to put you at ease.”

Most of “Rattlestar Ricklactica” is a hilarious and ridiculous parody of the entire Terminator franchise told through the perspective of an alien civilization comprised of sentient snakes. After Morty kills their inspiring astronaut and replaces it with a regular snake, it messes up their history so drastically that the snakes develop time travel and use it to try killing Morty.

Instead of a cool Terminator, they create a horrific cyborg that’s a terrible mix of robot, human, and snake — despite it being designed to put humans at ease.

1. When Beth was more badass than Jerry, yet again

"Jerry: I was just killing some snakes up here like everyone else, I guess, and finishing the Christmas lights.

"Beth: Wait, the whole time? I was screaming for help, and you stayed on the roof?

"Jerry: I couldn’t hear you over my own screaming. We’ve talked about this.

In every universe except for C-137, where Jerry and Beth had to become savage enough to fight an entire world of Cronenberg monsters, their marriage dynamic positions Jerry as the meek beta male and Beth as the brilliant yet unfulfilled badass. In moments of intense pressure such as this, we learn about the comical ways that dynamic manifests itself.

In times of dire need, apparently Jerry screams so loudly that he can’t hear his own wife’s cries for help, and it’s something they’ve talked about so many times that he chastises her for not remembering? In this case, Beth and Summer were fighting an endless number of violent snakes on the lawn while Jerry was up on the roof just hanging Christmas lights. Could Jerry be more hapless?

Rick and Morty Season 4 will return sometime in 2020.