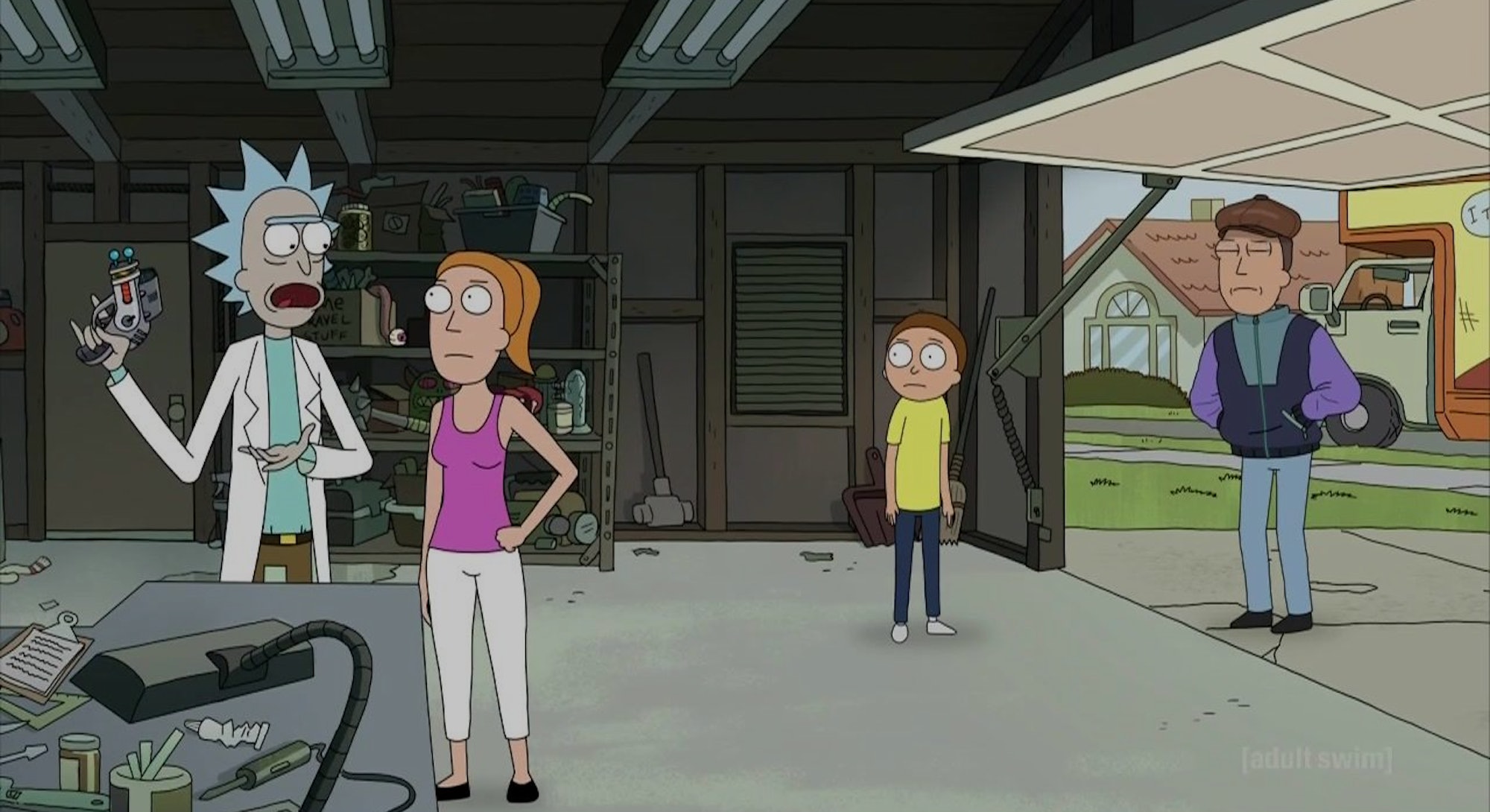 The first two seasons of Rick and Morty had their fair share of awesome quotes about everything from love and marriage to the frequency of race wars, but what are the best Rick and Morty quotes of all time since Season 3 wrapped up?

Rick and Morty Season 3 had some of the best episodes ever, and as such those ten newest episodes have some of the most poignant quotes that the Adult Swim series has ever had. But there are still tons of always-relevant quotes from earlier in the series. Rick and Morty might have its fair share of fart jokes — and a song about shitting on the floor — but its dark and bitter blend of nihilism with oddly uplifting existentialism lends itself to some really poignant quotes on life, love, and just how much Morty sucks.

6. Rick on the Pointlessness of It All

Rick: Listen to your sister, Morty. To live is to risk it all, otherwise you’re just an inert chunk of randomly assembled molecules drifting wherever the universe blows you. Oh, I’m sorry, Jerry, I didn’t see you there, how much of that did you hear?”

In “Rickmancing the Stone,” Summer and even Morty work through some emotional issues in hyper-violent ways amidst their parents’ divorce. What better way to dramatize the world view of this show than to have Rick vocalize the pointlessness of it all and how insignificant people are right while Jerry walks up. Aren’t we all just randomly assembled molecules drifting through life beset upon by external forces outside of our control?

Nobody is less apt to handle that than Jerry Smith, which makes it that much funnier when you realize that Rick is staring right at Jerry as he says all this.

5. Rick Cuts to the Core of His Beef With Jerry

Rick: “I took your family”? Who do you think had taken more from them when you shot 20 CCs of liquid dreamkiller into my daughter? She was Rick’s daughter, Jerry! She had options! That all ended because she felt sorry for you. You act like prey, but you’re a predator! You use pity to lure in your victims! That’s how you survive! I survive cause I know everything, that snake survives because children wander off, and you survive ‘cause people think, “Ooh, this poor piece of shit, he never gets a break! I can’t stand the deafening silent wails of his wilting soul! I guess I’ll hire him or marry him!”

When Rick and Jerry go on an adventure in “The Whirly Dirly Conspiracy,” (3.05) they’re inevitably forced to work out their many issues. Jerry accuses Rick of “taking” his family away from him; his central insecurity since the show began was that Beth pays more attention to her newly-returned absentee father rather than her husband, which ultimately erodes their marriage. Jerry isn’t wrong in this, but Rick isn’t wrong either in his demeaning takedown of Jerry’s beta male nature, relying more and more on other people’s pity than his own assertiveness. Jerry and Rick despise each other so much because they can’t understand each other.

As Rick points out, he’s a self-assured “doer” that goes for what he wants whereas Jerry is a meek person that mooches off the success and charity of others. It only makes sense that they’d hate one another. This monologue also echoes a lot of what we’ve heard at other points in the show, that Beth and Jerry only married because having Summer was an accident that forced them to stay together. It’s a sad predicament that only proves Rick’s point.

4. Rick Explains to Beth What the Multiverse Means to Smart People

Rick: The universe is basically an animal. It grazes on the ordinary. It creates infinite idiots just to eat them. Smart people get a chance to climb on top, take reality for a ride, but it will never stop trying to throw you and eventually it will, there’s no other way off.

Rick says this to Beth in “The ABC’s of Beth” before he tempts her with a replacement clone that would allow her to travel the universe on her own to figure herself out. It’s the same opportunity that Rick himself took, galavanting out in the infinite multiverse and leaving his family behind — you know, until he clung to what’s probably an alternate reality version of them.

Whether or not you believe in the multiverse or any of the wacky sci-fi presented in Rick and Morty, this is still a quote that holds true for arrogant intellectuals like Rick. In a way, this is Rick revealing his own self-deprecating nature, because he realizes that even he might one day get “thrown” from the top of the universe. This might not be the best quote of Season 3, but it might just be the most important one within the context of the show.

Morty: Nobody exists on purpose. Nobody belongs anywhere. We’re all going to die. Come watch TV.

The only quote not from Season 3 bears repeating because it’s the most important quote in the history of the show.

In an emotional call-back to the time Rick and Morty destroyed their native universe, Morty pleads with Summer to stay when she’s vowed to leave the family during “Rixty Minutes.” To her credit, much of the episode is about how in alternate realities, each of her parents was better off when they didn’t accidentally have Summer. Because when she didn’t exist, they never got married, and they went on to fulfill their dreams. It’s the bleakest possible inverse of “everything happens for a reason.”

Morty is cutting to the core of what Rick and Morty is about, how life itself is often cruel and absurd and the universe is so big that it makes people insignificantly small — yet still, there is meaning in the shared bleakness and the unfair comedy of it all. So if there’s one single quote that cuts to the “point” of Rick and Morty in a nutshell, it is quite literally this one on every level, even the meta-narrative level.

Pickle Rick: Because I don’t respect therapy; because I’m a scientist; because I invent, transform, create, and destroy for a living, and when I don’t like something about the world, I change it. And I don’t think going to a rented office in a strip mall to listen to some agent of averageness explain which words mean which feelings has ever helped anyone do anything. I think it’s helped a lot of people get comfortable and stop panicking, which is a state of mind [belch] we value in the animals we eat, but not something I want for myself. I’m not a cow. I’m a pickle — when I feel like it. So … you asked.”

Everybody seems to latch onto “Pickle Rick” because it’s such a gloriously ridiculous and utterly violent episode, but outside of these things it’s also perhaps one of the most important episodes of Rick and Morty ever for its B-plot about the value of therapy.

Rick avoids going to group family therapy by transforming himself into a pickle, which he does to “prove he can,” but his own hubris inevitably gets him into a literal pickle. He nearly dies, but of course, he sciences a way out of it. It’s Rick and Morty brilliant lowbrow humor at its finest, but Rick’s response here explains in dramatic fashion the exact kind of irrational ways that people avoid therapy. It’s wrapped up in arrogance, contempt, and a propensity to keep moving and doing and problem-solving anything that isn’t confronting his own problems. His alcoholism is just one form of that.

1. Dr. Wong’s Psychoanalysis of Rick and the Work of Therapy

Dr. Wong: Rick, the only connection between your unquestionable intelligence and the sickness destroying your family is that everyone in your family, you included, use intelligence to justify sickness. You seem to alternate between viewing your own mind as an unstoppable force and as an inescapable curse. And I think it’s because the only truly unapproachable concept for you is that it’s your mind within your control. You chose to come here, you chose to talk to belittle my vocation, just as you chose to become a pickle. You are the master of your universe, and yet you are dripping with rat blood and feces. Your enormous mind literally vegetating by your own hand. I have no doubt that you would be bored senseless by therapy, the same way I’m bored when I brush my teeth and wipe my ass. Because the thing about repairing, maintaining, and cleaning is it’s not an adventure. There’s no way to do it so wrong you might die. It’s just work. And the bottom line is, some people are okay going to work, and some people … well, some people would rather die. Each of us gets to choose.”

Perhaps the perfect antidote to Pickle Rick’s nihilism is this spot-on response from Dr. Wong, which is Rick and Morty Season 3’s most poignant piece of analysis that also has real-world implications. Rick and Morty has always been about the way mental illness manifests itself in different ways, and how the same trauma can influence family members, spreading almost like a disease. But the unifying principle here is that mental self-care and maintenance is equally as important to traditional biological maintenance. To Rick, this is boring work, and he’d rather manufacture more physical risk by ignoring that outright, transforming the mundane parts of life into a more exciting, life-threatening experience.

Now doesn’t that just explain just about any bit of self-destructive behavior in the history of mankind?

This point is further driven home in the final moments of the episode, when Summer and Morty want to return to therapy so they can heal, but their only parental units at the time — Rick and Beth — literally make fun of Dr. Wong and make plans to go out drinking. They both avoid problems at all cost, which is something so many of us do.

But at what cost? Will Rick ever learn? And will we?