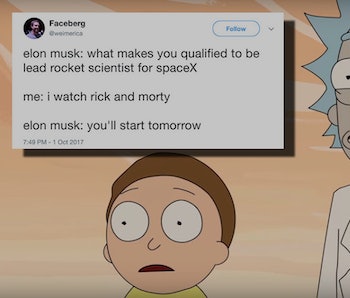 Rick and Morty is a good show, but it’s quickly gaining a (frankly well-earned) reputation for having a really, really shitty fan base. Even series co-creator Dan Harmon hates a certain segment of his misogynistic fan base. But, even when they’re not doxxing female writers, a good portion of Rick and Morty fans can come across as, well, insufferable, and they’ve become the target of a brutal new meme.

The meme takes a couple forms, but the various iterations all convey the same message: only smart people watch — and really understand — Rick and Morty. The subtext is that people who think they’re geniuses for liking this cartoon are actually insecure fuckin’ morons.

In July, the invaluable internet cataloger Know Your Meme observed an early, brutal example of this meme known as “To Be Fair, You Have to Have a Very High IQ to Understand Rick and Morty.” The meme, a massive block of text believed to have originated as a (hopefully) tongue-in-cheek Facebook post, takes the idea of a smarmy, big-headed Rick and Morty fan and dials it up to 11. Here’s the full text of the post:

To be fair, you have to have a very high IQ to understand Rick and Morty. The humour is extremely subtle, and without a solid grasp of theoretical physics most of the jokes will go over a typical viewer’s head. There’s also Rick’s nihilistic outlook, which is deftly woven into his characterisation- his personal philosophy draws heavily from Narodnaya Volya literature, for instance. The fans understand this stuff; they have the intellectual capacity to truly appreciate the depths of these jokes, to realise that they’re not just funny- they say something deep about LIFE. As a consequence people who dislike Rick & Morty truly ARE idiots- of course they wouldn’t appreciate, for instance, the humour in Rick’s existential catchphrase “Wubba Lubba Dub Dub,” which itself is a cryptic reference to Turgenev’s Russian epic Fathers and Sons. I’m smirking right now just imagining one of those addlepated simpletons scratching their heads in confusion as Dan Harmon’s genius wit unfolds itself on their television screens. What fools.. how I pity them. 😂

And yes, by the way, i DO have a Rick & Morty tattoo. And no, you cannot see it. It’s for the ladies’ eyes only- and even then they have to demonstrate that they’re within 5 IQ points of my own (preferably lower) beforehand. Nothin personnel kid 😎

Right around the time Rick and Morty’s third season ended (or did it?), Twitter users began a new round of dunking on the show’s toxic fandom that was very much in the spirit of “To Be Fair…”

There’s a different version of this meme popping around too that isn’t so much about how ~smart~ the person who watches Rick and Morty is, but makes a joke of not really knowing what it is or misidentifying the show. It is a pretty good meme.

The Daily Dot noted that the r/dankmemes subreddit (which, to be fair, is full of tons of people who act exactly like the Rick and Morty fans the meme is skewering), nominated “Rick and Morty Memes” as September’s “Meme of the Month.”

Perhaps, now that Rick and Morty’s going to be off the air for a while, given the usual lengthy gap between seasons, the show’s douchiest “intellectual” viewers can chill out. Rick and Morty is a smart show, but fans who earnestly believe that you need to have a high IQ to really enjoy Rick and Morty are missing the point. Not to “well, actually” them, and risk getting on an intellectual high horse myself, the point of the show seems to be that it’s not actually good to be the smartest man in the universe. At the very least, the third season very strongly made the case that it’s not great to think and declare that you’re much, much smarter than everyone around you, even if you are.

Plenty of people watch Rick and Morty — it was the most popular comedy on TV in 2017. Some of them just thought it was totally sick when Pickle Rick killed all those rats. Others went way in on the show’s intellectual, nihilistic subplots. Some of those viewers recognized those plots for what they were. Other fans got mad that there were #FakeGeekGirls in the writer’s room of their favorite show, and attempted to dox them. Memes aside, the bottom line is that people should be able to watch a show and engage in it at any level they choose, so long as they’re not a fuckin’ asshole about it.

But, hey, what do I know? I just watch Rick and Morty.

If you liked this article, check out this video about an Evil Morty fan theory on Rick and Morty.