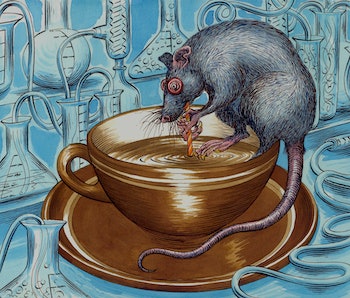 The small, furry commuter gives ol’ Pizza Rat a run for its money in terms of cuteness and agility, sure. But Coffee Rat and his kind have actually taught scientists some important lessons about coffee’s effects on humans.

In fact, we depend on rodent studies for much of the information we have about how caffeine affects the brain and the body. Here are five studies that wouldn’t have been possible without the “coffee rats” in labs everywhere.

The Splenda in your coffee might stick around in your body

Popping a calorie-free sweetener in your morning latte seems like a healthier choice than using sugar. Rat studies show that sucralose, the ingredient in Splenda, breaks down in the body. It turns into two compounds stored in fat cells, and which stick around for a long time.

That runs totally counter to marketing claims, which state that the substance passes through the body basically intact. So why the discrepancy?

“There is no incentive for the manufacturer’s research team to do the proper research that revealed these findings,” Susan Schiffman, an adjunct professor at North Carolina State University and one of the authors on the study, told Inverse in 2018 when we reported on the controversy.

On the other hand, coffee without sucralose might have benefits for those trying to drop a few pounds. Another rodent study done in July 2019 — this one in mice — found that coffee might help weight loss.

Researchers aiming to get at whether we really are what we eat found in 2016 that people who enjoy bitter foods like coffee are more likely to be sadists.

“The results suggest that how much people like bitter-tasting foods and drinks is stably tied to how dark their personality is,” the researchers wrote at the time. Okay then.

Since bitterness is often a sign that food is toxic, the findings make sense on an evolutionary level. You’re living dangerously — sort of — with every cold brew. Sweet foods, on the other hand, tend to have a higher density of calories, which are key to survival, and thus more evolutionarily beneficial.

In the same vein, a 2012 study conducted in rats showed that liking bitter food also probably means a person is tougher. The more sensitive rats are to bitterness, the more subordinate and easily stressed they are, according to the findings. The same may be true for humans, researchers said at the time.

Four cups of coffee a day might sound extreme. But rat research published in 2018 shows that drinking four cups of joe might actually reduce the risk for heart attacks, strokes, and diabetes.

Researchers gave rats a dose of caffeine that would be equivalent to drinking four cups of coffee. They found that caffeine helps heart cells function more efficiently by “pushing” a protein called p27 into the cells’ mitochondria.

The process essentially made old rats’ hearts young again — mitochondria in caffeinated older rats worked as efficiently as that in healthy younger rats.

Combining cocaine with caffeine creates an incredibly potent stimulant, according to a 2015 study. It’s more addictive than coke on its own. Together, the substances have an increased “reinforcing effect,” meaning users are more likely to keep coming back to the duo than they are to just cocaine.

Rats with access to either cocaine or to the combination drug learned how to self-administer the drug. Those who were given just caffeine, on the other hand, didn’t.

Perhaps unsurprisingly, the rats accessing cocaine worked harder to get it — but those receiving the combo drug worked even harder.

Some Twitter users theorize that Coffee Rat is, in fact, hurriedly bringing his cup of joe to his boss. Either way, hopefully these rats aren’t drinking too much of the stuff — because a chemical in coffee has been linked to cancer in rodents, prompting warnings from regulators in California.

The chemical, acrylamide, is found not just in coffee, but also in foods like potato chips and bread. But the association, while enough to inspire a warning label on coffee in California, has yet to be observed definitively in humans. And though they are a boon to caffeine researchers everywhere, there is only so much we can infer from these kinds of studies — after all, coffee cups or not, rats are not humans.

More like this
Mind and Body
Sep. 13, 2022
Is decaf coffee caffeine-free? ‘Dr. Coffee’ shares the answer
By Elana Spivack
Science
Sep. 23, 2022
Three everyday beverages that may taste worse because of climate change
By Tara Yarlagadda
Science
Sep. 17, 2022
Is green coffee good for you? A food scientist debunks the hype
By Elana Spivack
Related Tags
Share: