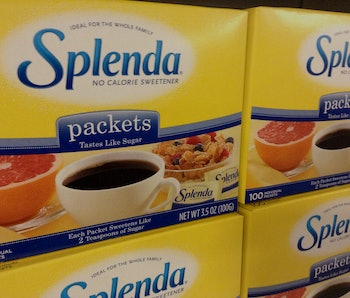 You might want to think twice before loading your half-caff skinny no-whip latté with Splenda next time you grab a cup at your local cafe. Despite its marketing as a low-calorie sweetener that passes through your body totally intact, research now suggests that sucralose — the chemical that makes up Splenda — in fact produces two previously unidentified metabolites during digestion and could even be stored in fat cells. If true, this means that the studies used to gain approval of sucralose by the US Food and Drug Administration and the European Food Safety Authority did not accurately capture the potential health consequences of the food product.

In a paper published August 22 in the Journal of Toxicology and Environmental Health, Part A, a team of researchers at North Carolina State University and food testing company Avazyme, Inc., found that sucralose breaks down into two different metabolites in the rat digestive system. They also found that sucralose was detectable in the rats’ fat deposits two weeks after the animals had stopped consuming sucralose.

“The average Splenda users should be informed that sucralose is accumulating in their bodies and that it forms metabolites whose effects are unknown,” Susan Schiffman, Ph.D., an adjunct professor at North Carolina State University and one of the authors on the study, tells Inverse. “The long-range effects of sucralose are not understood. Furthermore, we already know that it has adverse biological effects.”

Schiffman has identified some potential adverse effects in her previous research. In a 2008 study on mice published in Journal of Toxicology and Environmental Health, Part A, for instance, she and her colleagues found that sucralose altered the gut microbiomes in rats and changed levels of enzymes that affect how the body processes different drugs.

Another study, published in Nature in 2014 by a different team, showed evidence that sucralose and aspartame — another popular artificial sweetener — altered gut microbiomesin mice and led to glucose intolerance, a precursor to diabetes.

It’s worth noting that while these results sound worrisome, they need to be replicated in humans before we really know how sucralose affects humans. Additionally, despite the sucralose metabolites being an unexpected find, further research will be necessary to figure out what health consequences they have, if any.

In the latest study, Schiffman and her colleagues fed rats an average of 80.4 milligrams per kilogram of body weight each day for 40 days. While this is higher than the acceptable daily intake set by the European Union — 15 mg/kg — it is a similar amount of sucralose as researchers used in the toxicology studies that established its safety profile in the first place. In those studies, scientists concluded that sucralose quickly passed through the body, unaltered, meaning that even though it tastes like sugar, our bodies don’t use it for energy or fat storage.

But in the new paper, Schiffman and her colleagues found evidence contradicting these initial assessments. By testing the rats’ urine and feces, they found that, in addition to unaltered sucralose, the animals were passing two previously unstudied metabolites, slight variations on sucralose. This finding suggests that sucralose might not be so inert after all.

These metabolites, the researchers say, are less polar than sucralose, meaning that they can bind to fat tissue more easily. This is especially concerning given their finding that, even two weeks after the rats had stopped consuming sucralose, they still showed detectable levels of sucralose in their fat.

So if sucralose isn’t as inert as researchers once claimed, the obvious question is, Why didn’t they realize at first?

For Schiffman, the answer is obvious.

“There is no incentive for the manufacturer’s research team to do the proper research that revealed these findings,” she says.

She anticipates that food industry scientists will soon refute these findings, but she plans to continue researching the matter.

Correction 8/28/18: In the original version of this article, it was stated that Schiffman and her colleagues authored the 2014 Nature article, when in fact it was another team.