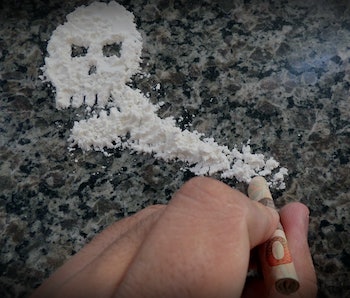 Coffee jitters aside, caffeine is mild as far as stimulants go. But a new report reveals that combining it with cocaine turns it into an insanely potent and highly addictive drug — one that’s already being sold on the streets in South America.

As the team of Italian scientists points out, it’s no secret that drug dealers cut cocaine with caffeine to use less of the drug and lower costs. What isn’t clear is whether distributors realize the incredible potency of cocaine and caffeine. In the study, which they presented at the Society for Neuroscience conference last month, the researchers discovered that caffeine boosts coke’s “reinforcing effects” — that is, the combination makes users even more likely to keep seeking out the drug than they would if they were addicted to coke alone.

The researchers, using rats as test subjects, found that individuals with access to coke alone or the coke-caffeine super-stimulant learned how to self-administer the drug, while those that only had access to caffeine did not. In another set of experiments, rats had to “work” to access the drugs by activating a trigger a set number of times. With each dose, that number increased, forcing rats to put in more effort to get their fix.

As expected, rats that received cocaine worked hard to get their dose, and rats receiving coke cut with caffeine worked even harder.

Exactly how caffeine boosts coke’s potency — and what additional dangers it poses to users — will require further investigation. But one thing’s for sure: Whether drug dealers are aware of it or not — they will be now, anyway — they’ve done a brilliant job of turning cost-cutting into an unstoppable marketing campaign.