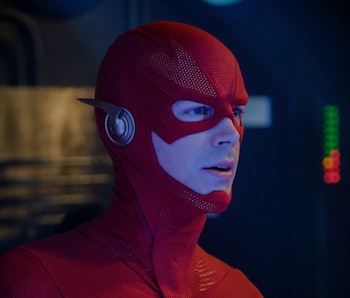 A crisis looms over DC’s television universe, and it’s coming fast. On December 8, the five-part special “Crisis on Infinite Earths” will commence on The CW, in which the heroes of Arrow, The Flash, Supergirl, Legends of Tomorrow, Black Lightning, and Batwoman unite to stop the biggest threat imaginable: The destruction of not just their reality, but every reality ever.

While it was Arrow that started it all, The Flash quickly became one of the most important shows in a sprawling Arrowverse. As the series that introduced the concept of the multiverse, Barry Allen’s adventures and his connection to the Speed Force will play a very crucial role in the crisis (even if the specifics are still unknown).

But if you haven’t been keeping up with The Flash (maybe you’re more of a Legends of Tomorrow fan?), we’ve got you covered with comprehensive quid that will get you caught up on the events of Central City at lightning speed so you’re prepared for “Crisis on Infinite Earths.”

Strap on your friction-proof boots, it’s time to catch up on The Flash.

A “quick” introduction to the world of The Flash

The Flash, a spin-off of Arrow, premiered in the fall of 2014. Where Arrow was a gritty superhero series about a billionaire playboy turned razor-sharp killer with a bow and quiver, The Flash quickly distanced itself as the sunnier, funnier sister series with plenty more science-fiction inspired villains and episodic plots.

As a child, Barry Allen (Grant Gustin) saw his mother murdered by a flash of lightning. With his father imprisoned for a crime he didn’t commit (her murder), Barry was adopted by family friends and grew up to become a forensic scientist, hoping to prove his father’s innocence and unmask the mysterious murderer in yellow.

On the night of a grand exhibition by S.T.A.R. Labs, the laboratory’s particle accelerator exploded, causing a severe lightning storm that struck Barry. That night, Barry became imbued with the powers of the Speed Force, allowing him to run at blistering speeds and vibrate his body at high frequencies. From that day on, and with the help of his friends at S.T.A.R. Labs, Barry has been “The Flash,” and has spent the last few years saving Central City from other meta-humans with dangerous intentions.

The story of The Flash Season 6, so far…

In the aftermath of Season 5, Barry and Iris West (Candice Patton) are overcoming the shared trauma of losing their daughter, Nora (Jessica Parker Kennedy), who traveled back in time to meet her parents.

The Flash is also preparing for the “crisis” — an apocalyptic event previously foretold to take place in 2024, now bumped up to 2019. But in the midst of his prep, The Flash has become embroiled in a battle with a new enemy: Ramsey Rosso, a brilliant doctor turned meta-human villain called “Bloodwork” who can weaponize his own blood.

Here are all the important beats from The Flash Season 6 you need to know.

Since the end of its very first episode, The Flash teased “Crisis on Infinite Earths” through a Central City Citizen front-page headline from April 2024: “FLASH MISSING, VANISHES IN CRISIS.” But the events of Season 5 have shortened the timetable, and now the “crisis” will take place in December 2019.

As fans have been able to reveal online, the article, written by Iris West-Allen, details a huge battle between The Flash, Green Arrow, the Atom, and Hawkgirl against the Reverse-Flash. During the battle, The Flash mysteriously disappears, leaving Central City in chaos.

“The sky took on a deep crimson color as the ensuing battle created the most destruction this city has seen since The Flash first arrived in Central City,” the article reads. “Several trucks were caught in the frat, spilling their contents into the street. Power outages sweapt nearly twenty city block [sic], between 16th street and Adams Avenue. Five of those blocks still remain without power.”

The article ends with a note saying that The Flash and Reverse-Flash “were gone without a trace.”

Because the future isn’t written in stone, the events of this article may change. There isn’t mention of other DC heroes that have emerged since the premiere of The Flash, like Supergirl, Superman, Black Lightning, and Batwoman. We know “Crisis on Infinite Earths” will involve over a dozen heroes, maybe even two dozen, but to what extent remains unknown. All’s for certain is that Hawkgirl (played by Ciara Renée) has not been seen in years.

4. The vision and what it means for “Crisis on Infinite Earths”

In Episode 2 of this season, The Flash attempted to “cheat” fate by traveling forward in time to the day after the crisis, until a friend from Earth-3, Jay Garrick (John Wesley Shipp), stops him.

Instead, Jay hooks up Barry’s mind to a machine to allow Barry to observe future timelines without ruining them. What Barry sees are a billion scenarios where the multiverse is destroyed, and only one where it’s saved by his own sacrifice. This encourages Barry to do everything he can to prepare for his own end.

3. Bloodwork vs. The Flash

While the crisis looms, the main antagonist of The Flash Season 6 is Bloodwork (aka, Ramsey Rosso, a talented doctor and friend of Caitlin Snow).

After his mother, also a brilliant doctor, allowed herself to die from cancer, Ramsey vowed to find the cure for all diseases. But what he discovered was a toxic meta-human power that allowed him to weaponize his own blood.

In the two-part episode “The Last Temptation of Barry Allen,” Bloodwork managed to convert Barry Allen to his side. Just when the world needs The Flash the most, before the crisis, The Flash has become something so unlike himself.

In Season 4, The Flash introduced Ralph Dibny (Hartley Sawyer), a private detective whose powers to stretch manifest after The Flash and Star L.A.B.S. open up a Speed Force portal in front of a Central City bus, giving all of its passengers meta-human superpowers.

Although it took awhile for Ralph to, ahem, mold with the other heroes, he eventually evolves to become a full-fledged member of “Team Flash,” alongside Caitlin Snow/Killer Frost and Cisco Ramon/Vibe.

And because Cisco has willingly given up his powers this season and Killer Frost is too unstable to protect the city on her own, The Flash has publicly dubbed Elongated Man as his successor in preparation for the crisis. Then again, this title might not matter anyway if The Flash’s vision of the crisis comes true.

A warning told by The Monitor (LaMonica Garrett) and confirmed by The Flash’s own showrunners is that The Flash “will die.”

“‘Crisis’ turned out to be the best thing that could have happened to The Flash because it created an immediacy to things,” showrunner Eric Wallace told Comic Book Resources in October. “We know that on December 10, 2019, the Flash will die. We’re not messing around.”

There’s hardly reason to not believe him. All season long, The Flash has made its protagonist’s coming death a “not if, but when” scenario. And it reflects the events of the original comic book: In 1985’s Crisis on Infinite Earths, the crossover event series in which the upcoming TV special is adapted from, Barry Allen sacrifices himself to save the multiverse, a move that allowed his sidekick, Wally West, to take over as The Flash for nearly 20 years.

Will that happen in “Crisis on Infinite Earths”? We know that “The Flash” will die, but will Barry Allen die too? We’ve seen Barry outrun fate before, but whether or not he’s actually fast enough will be revealed in due time.

“Crisis on Infinite Earths” begins Sunday, December 8 at 8 p.m. Eastern on The CW.