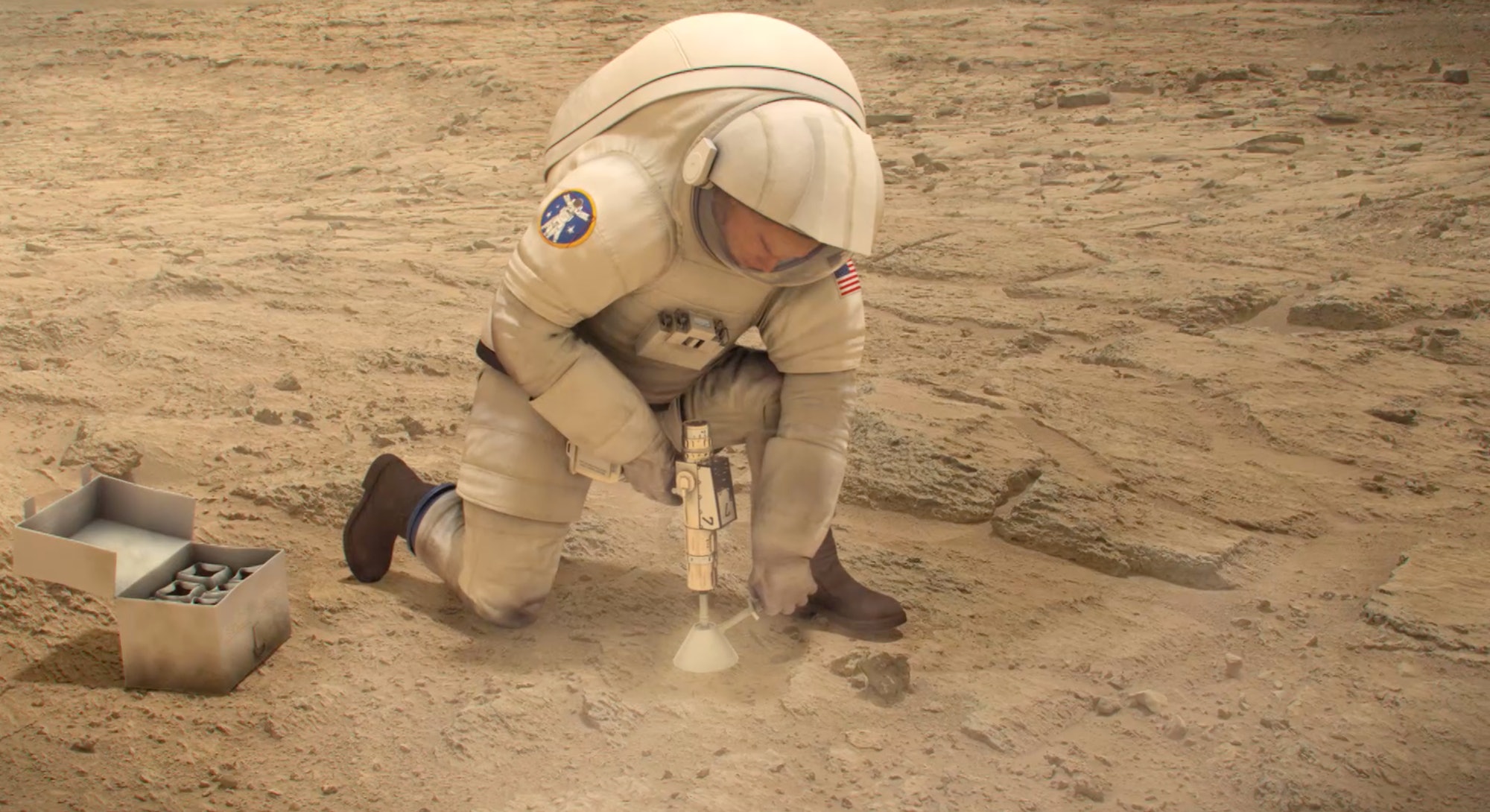 Humanity is on the verge of a new, space-bound era, as ships that can carry 100 people or more inch closer to taking their first lift-off. After that, it’s only a matter of time before the ability to refuel on the moon other planets enables a new era of exploration.

“The ability to deliver 100-plus people at a time to orbit, to space itself, is going to be the beginning of the biggest revolution in the history of humanity, if not life itself,” Rick Tumlinson, founder of the venture capital firm Space Fund, told Inverse in February.

One of the most ambitious plans for this new era is the plan to try to establish a city on Mars. Unlike the moon landing, whose astronauts were quickly returned to Earth, in these future Mars cities, humans will stay there for decades or even the rest of their lives. The duration of these visits will transform them profoundly, both in terms of their literal genetics, but also by freeing them to be able to pursue new economic and political systems in the blazing red desert.

This vision could arrive relatively soon. SpaceX CEO Elon Musk has previously detailed an ambitious plan that would produce a city in just over 30 years. Under his timeline, the first humans would depart in the 2020s, followed by nine subsequent launches that build up the base over time, and reaching the size of a city by 2050.

Others are slightly more skeptical. Lewis Dartnell, a research scientist with a position at the University of Westminster, told Inverse in October 2018 that “while the first human mission to land on Mars will likely take place in the next two decades, it will probably be more like 50-100 years before substantial numbers of people have moved to Mars to live in self-sustaining towns.” Dubai, on the other hand, is aiming to establish its Mars colony by 2117.

Inverse has spoken to evolutionary biologists, economists, architects, and sociologists to build out a picture of what this Mars city could look like. Assuming the SpaceX timeline does resemble something close to reality, here’s how it may play out.

This would be the earliest point at which humans set foot on Mars. Musk has suggested that SpaceX could host an unmanned mission as early as 2022 followed by a manned mission in 2024, but has since suggested that the first launch would come after a planned trip around the moon, scheduled for 2023.

What will they do when they arrive? Try and survive, probably.

SpaceX’s principal Mars development engineer, Paul Wooster, stated in September 2018 that the first step for its company’s astronaut mission would be establishing a propellant depot. This would create liquid oxygen and methane to fuel the Raptor engines that would help the Starship return home. This will be strenuous work: Humans would need to harvest one ton of water ice per day.

The long travel journey of three to six months, and the need to establish a refueling center, quickly necessitate a more permanent settlement. Hassell Studio, an international architecture firm, designed what such a settlement may look like as part of NASA’s 3D Printed Habitat Challenge. The resultant design, which houses four astronauts, would use only local resources or materials from the Mars lander. Autonomous robots would build the basic shells, while humans would land and inflate “pods” inside the structures to complete the habitat.

The challenge, started by NASA in 2015, encompasses a range of ideas. It includes team “SEArch+/Apis Cor”‘s idea for nuclear power station-looking towers:

Early designs like these and others could sow the seeds for how this colony emerges. Jim Pass, CEO of the Astrosociology Research Institute, is worried that some ideas floating around are too focused on the individual, without enough care for how the humans will socialize.

“I see some of these proposals, and I’m thinking to myself, they’re too isolating,” Pass tells Inverse.

That could spell problems over the coming years.

At this stage, the humans may built something resembling a city. Each of SpaceX’s Starships holds 100 people. The company has a window to send more rockets every two years. That means it has a good chance of sending around 1,500 people to Mars by the 2050s.

Scott Solomon, a professor at Rice University and author of Future Humans: Inside the Science of Our Continuing Evolution, wants a much higher figure. To ensure genetic diversity among the population, he said an early settlement would need around 10 times as many people to thrive.

“We don’t necessarily have to have the first flight there be 100,000 people, but within a few years you would like it to be of that order of magnitude roughly,” Solomon tells Inverse.

It may be hard to attract that many people to go to Mars, particularly as it depends on making the tickets cheap enough to appeal to those beyond the super rich. This is a big economic problem: Space travel as it stands appeals to the super-rich mostly due to its exclusivity. Being among the first private citizens to get to space is a big part of what entices them to pay the $20 million or so in fees it currently costs. As more and more people go, people will be less incentivized to pay. Guenter Lang, an economics professor at Kühne Logistics University in Germany, tells Inverse that “the cheaper it gets, it is a bit self-destroying, the willingness to pay.”

Musk has indicated that SpaceX could one day price a return ticket at around $200,000, the median cost of a house in the United States. That’s similar to Richard Branson’s $250,000 price for a trip to space on Virgin Galactic.

Assuming the company behind these early Mars cities can reach a price that low, Lang estimates that around one percent of the world’s 36 million millionaires would actually take up what is essentially a very expensive trip. That’s still about 360,000 people, though, more than enough for Solomon to reach his ideal quota.

This first batch of people will have enormous influence on what Martian cities eventually become, as their genes will form the foundation for future generations. Some of these changes will be good: The first Martian settlers will likely be very physically fit to ensure they survive the trip. Future Martians will likely evolve to be much stronger than their Earthbound counterparts.

But the outsize impact of these first settlers’ genes could have downsides, particularly if the trips are self-funded. Non-hispanic whites, though they comprise only 60 percent of the American population, account for 76 percent of millionaires. Left entirely to the free market, future Martian cities could wind up populated entirely by the offspring of fitness nut-finance bros.

Beyond genetic influence, these first settlers will also shape the economies and political systems for these first settlements. SpaceX has talked about a research-focused city, where teams burrow underground to learn about the darkest corners of Mars’ history, and use direct democracy to make decisions. Pass thinks that if religious groups make it to Mars, they will try to start a theocracy. If Mars’ first settlers have a military background, Martian society would likely be very officious and hierarchical.

In other words, the empty, history-free surface enables the creation of a broad array of new systems.

“Various thinkers and visionaries have long held out utopian economic models, ranging from egalitarian socialism (where, for instance, you might imagine each settler being given an equal starting share of the land and output of the settlement) to libertarian capitalism (where, instead, you might imagine a minimal state with maximal trust in the market),” Matt Weinzierl, a professor at Harvard Business School, told Inverse in April 2019. “On Earth, our histories make it difficult to pursue any of these ‘pure’ models—among others—but if you had settlers choosing which settlement to join and designing it from scratch, we might be able to give them a real try.”

Around 100 years after the first city takes shape, things will start to get really interesting. This is the point where humans may start to diverge from their original genes. Solomon explains that due to the high levels of radiation, genetic mutations could appear at a higher rate, accelerating the evolution process.

This could lead to a number of changes that in effect make life on Mars easier. Zero-gravity environments are notoriously tough on people’s bones, for example, and future generations of settlers may evolve stronger bones than their Earth-bound counterparts to compensate. They may also grow more near-sighted due to the cramped living conditions, and learn to use the limited oxygen more efficiently. Martians will possibly develop a new skin tone to protect against the hard radiation, and may even lose their immune system due to the sterile environment — a change that could make sex and other contact with Earth-bound humans deadly.

“Evolution is faster or slower depending on how much of an advantage there is to having a certain mutation,” Solomon says. “If a mutation pops up for people living on Mars, and it gives them a 50 percent survival advantage, that’s a huge advantage.”

This next generation will likely be the one to form societies. As the population swells into the six-digit figure territory, the colony will start to split into sub-groups depending on their labor or interests. They may start to craft an identity for themselves, separate from their former Earth-human providers, as the colony grows more self-sufficient. They will tell stories to their children about how this place came to life, and develop family histories and mythologies of their own.

“An identity develops,” Pass told Inverse, who sees this tipping point as somewhere past the 1,000-person mark. “They started off as being from Earth, but at some point think of themselves as from Mars. And so, you might have interplanetary relations between different settlements. Not only on Mars and Earth, but other places as well over time.”

The city may branch out even further, extending its reach across the red surface. Perhaps it starts considering the prospect of terraforming more seriously. It could also send rockets out to even further reaches of the solar system, setting up colonies and repeating the cycle all over again. Similar to Amazon Prime show The Expanse, where humans form nations and splinter off from the Earth group, Mars could be the start of a new era of a broad diversification of humanity across the stars.