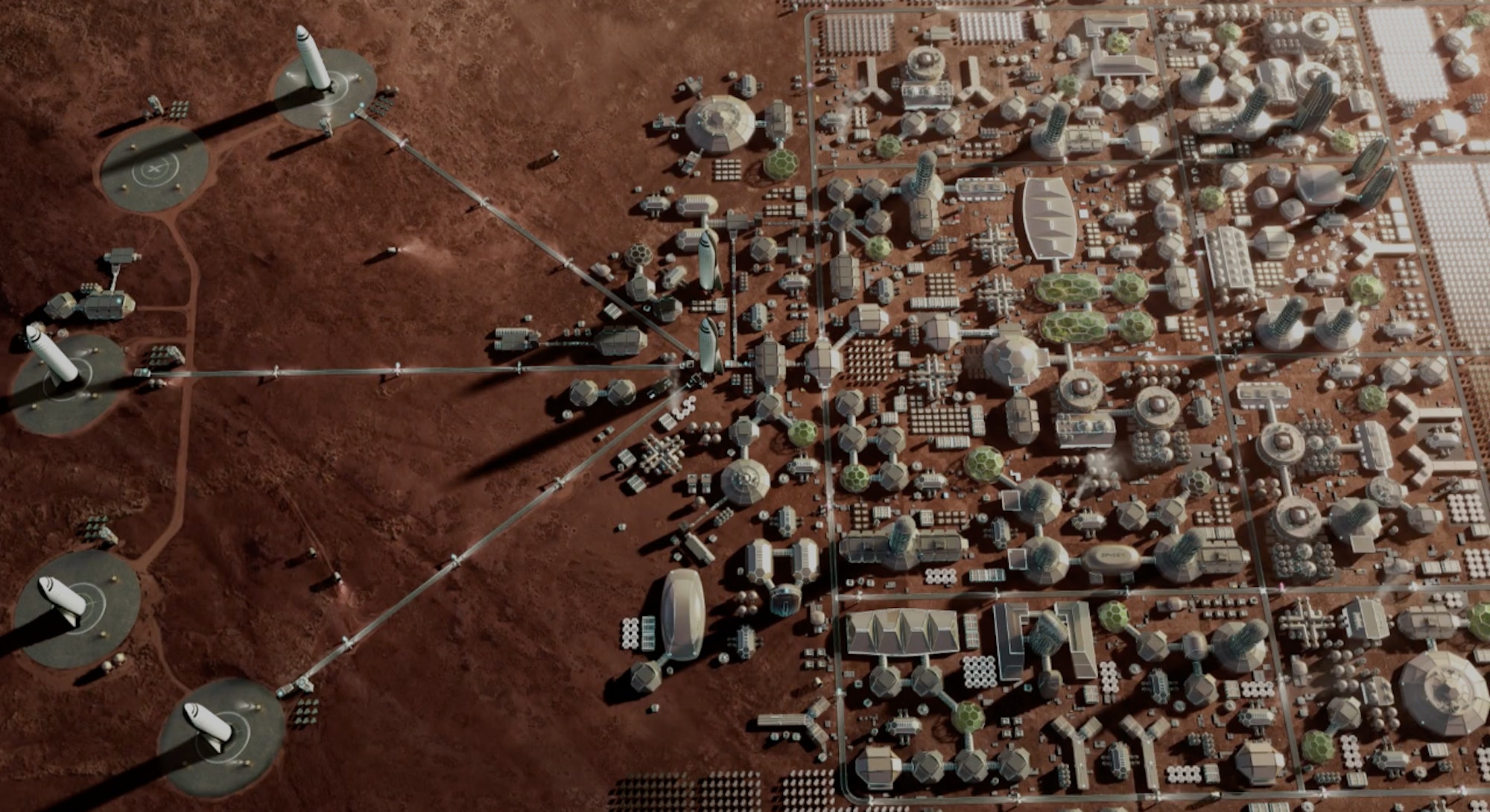 The first humans have yet to set foot on Mars, but astrosociologist Jim Pass is already hard at work on solutions to stop them from getting lonely.

Pass is the CEO of the Astrosociology Research Institute, dedicated to developing the nascent area of study. After all, SpaceX founder Elon Musk has already sketched out a vision for how his Starship could some day transport 100 people at once to help build a city on Mars as early as 2050. There is even a pricing plan: Return tickets will start at $500,000, and then gradually fall till they are below the median cost of a house in the United States so people could give up their lives to start anew in space.

So far, most of the discussion has focused on how to make the Starship fly and whether the humans could survive on the surface, but there’s been little attention paid to what life would be like there. The Habitat podcast documents how six people live in a simulated Martian house for one year in Hawaii, a test designed to give NASA important data about living conditions. But six trained astronauts living together for a fixed period is a far cry from 60 people living on another planet indefinitely.

“I think it’s kind of incredible that the social sciences weren’t really into studying space issues in the very beginning of the space age,” Pass tells Inverse. “You had some psychologists that were involved, but the anthropologists, sociologists, political scientists, and others weren’t really on top of things.”

Pass, who received his sociology PhD from the University of Southern California in 1991, leapt into action in 2003 to create a website focusing on how sociology can apply to space travel. The institute was founded in 2008, and lists a number of academics as part of its research team. Its Journal of Astrosociology has already published two volumes.

His main concern, at least so far? The threat of social order breaking down and new movements forming form the remains. In his view, Mars need more input from the field of astrosociology before these missions could ever start.

One of the biggest issues with these hypothetical dwellings is the heightened risk of isolation. Trips from Mars to Earth can take between three to six months, and even radio signals take around 20 minutes. It’s not the same as spending months in the space station or on the moon, where communication can still pass back to earth quickly. Home is also a (relatively) short space flight away.

Martian colonists will not have these luxuries, Pass explains, which means their living situation will require much more careful planning.

“You can’t just throw a group of people in an isolated environment without any kind of structure,” Pass says. “Otherwise, you’re going to have chaos, a heightened amount of deviance, and dangerous behavior.”

The early inhabitants of, say, 10 people, could probably simply follow a command structure similar to NASA. But over time, a growing population would require the inhabitants to divide labor similar to villages on Earth.

“As the population gets larger, it also becomes more stranger oriented,” Pass says. “In a small group, people know each other pretty well, but then as a group grows, then it becomes a situation where people start to form their own social groups and relationships, and they tend to isolate themselves into those kinds of structures.”

For this reason, Pass is worried that some concepts for future Mars settlements don’t contain enough socializing spaces. A central dome would enable greater interaction, perhaps with a park or other amenities.

The Victorians built many of the U.K’s urban parks to rejuvenate the cities choked by the Industrial Revolution, moves inspired by the Romantic poets that prized natural beauty. With no breathable atmosphere on Mars, similar spaces could be vital to inhabitants’ wellbeing.

Life on Mars: Forming an Identity

In Amazon Prime show The Expanse, residents of Earth and Mars have formed such distinct identities and that they even declare war on each other. In his novel Moving Mars, Greg Bear even described a fictional national flag as a red circle plus two smaller ones on a blue and white background. It’s perhaps a vision not too far off reality, as the harsh conditions and shifting economic relationships change how the inhabitants see themselves.

“An identity develops,” Pass says. “They started off as being from Earth, but at some point think of themselves as from Mars. And so, you might have interplanetary relations between different settlements. Not only on Mars and Earth, but other places as well over time.”

National identity is a broad area of academic study with no clear answers. French scholar Ernest Renan wrote in 1882 that a nation is “a large-scale solidarity, constituted by the feeling of the sacrifices that one has made in the past and of those that one is prepared to make in the future.” Americans speak about the 1776 revolution as a nation-defining moment, while Australia focuses on the 1915 invasion of Gallipoli. Perhaps centuries from now, Martians will talk about the asteroid shower of 2090 as a pivotal moment in their own history.

Survival can help craft a narrative, but it’s not enough to shift power dynamics and create a government. Ernest Gellner theorized in the latter half of the 20th century that industrialization created the modern nation-state, while Andreas Wimmer argued that a more likely indicator was the power balance shifting from established regimes to nationalist movements. A Pew Global Research poll in February 2017 found that most in the United States and Europe see it as a function of language rather than birthplace, valuing it higher than customs or religion. Will Mars’ human inhabitants develop an identity through establishing these common grounds, or will their economic circumstances dictate their feelings?

“In the beginning, they’re going to be highly dependent on Earth for supplies and so on,” Pass says. “So I think that’s going to be a situation where there might be some resentment over time and they still need assistance from Earth, but the more that they can become independent, that’s when things start to change.”

This is part of SpaceX’s plan for the settlements. The first humans will be tasked with setting up a propellant plant to fuel the ships, establishing habitats and life support systems. Over time, once the humans’ needs are met, researchers would turn to completing experiments into the history and geology of Mars. This growing independence could change their perspective on the relationship.

This creation of an identity could shift the power dynamics in terms of the settlers’ relationship with Earth. While Pass notes that identities and subcultures can form out of any fraction of people, the unique conditions of Mars will likely make for much stronger ideas.

“I would think that ethnocentrism would set in down the line more,” Pass says. “As the population gets to a certain size, maybe 1000 people or something like that…they create a self identity, as Martians as opposed to Earthlings.”

Life on Mars: How to Run a Government

Musk told an audience at South by Southwest in March 2018 that he envisioned a direct democracy for the first few visitors, voting directly on issues instead of sending delegates. He contrasted it with the early United States, which necessitated the need for a representative democracy as citizens couldn’t communicate quickly over long distances.

“Everyone votes on every issue and that’s how it goes,” Musk said. “There’s a few things I’d recommend. Keep laws short…something suspicious is going on if there’s long laws.”

The early Mars inhabitants may not agree. Much like the identity, the resultant structure may emerge out of conditions that are hard to control.

“It all depends on who’s sponsoring the settlement,” Pass says. “If a religious group was in charge, then you’d have that type of structure, more of a theocracy. If you send military types, then you might have more of a military structure to begin with. But then if you just send average people, like MarsOne was supposed to do, then you have to come up with some kind of structure beforehand, before you even leave, because they’re not really used to governing themselves.”

This forward planning could prove vital to the settlement as the team lays the groundwork to send the first humans to Mars.

“The more planning that goes into it, the more smoothly things will go as a population grows and things become more and more complex,” Pass says.

Hopefully, Musk has worked out some of these issues before the first humans touch down in the next few years.