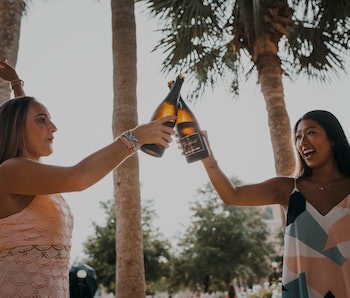 The scientist David Nutt has big plans for Alcarelle, his “hangover-free” alternative to alcohol. The English professor, famous for his research on how psychedelics affect the brain, said in 2016 that his concoction could replace all regular alcohol by 2050. Now, he’s offering a more temperate prediction: Alcarelle will be publicly available in five years; an alternative to boozy options at the bar.

In an interview published Tuesday in the The Guardian, Nutt explains that Alcarelle is intended to induce that tipsy, social feeling you get from drinking alcohol without the ensuing pain and health problems. The goal is for drink companies to eventually incorporate Alcarelle into their products, creating an alternative option to alcoholic drinks. In that scenario, Alcarelle would be regulated as a food additive.

While Alcarelle is the name of the synthetic alcohol, its active ingredient is an alcohol replacement molecule dubbed “alcosynth.” Nutt describes the molecule as an alcohol antidote and says he discovered it while researching how to reverse drunkenness in 1983 as a Ph.D. student. He says that alcosynth activates the GABA receptors — neurotransmitters that send chemical messages through the brain and nervous system — that induce tipsiness, causing an almost-alcohol effect.

“We know where in the brain alcohol has its ‘good’ effects and ‘bad’ effects, and what particular receptors mediate that — GABA, glutamate, and other ones such as serotonin and dopamine,” Nutt says. “The effects of alcohol are complicated but … you can target the parts of the brain you want to target.”

Only time — and regulation — will tell whether Alcarelle actually makes it to market. As of now, Nutt and his team are the only ones slurping it down (mixed with some fruit juice).

There’s a big market for an alternative to alcohol. Not only are people becoming more health conscious; the ills caused by alcohol are also becoming more clear. In August 2018, for example, scientists reported in The Lancet that there is no safe limit when it comes to drinking alcohol, despite previous claims that light drinking could actually help health.

Other research highlighting the dangers of booze include studies showing that alcohol can damage the DNA of stem cells and make you angry. Some scientists have even suggested that it’s very likely that, if you drink at all, you’re drinking too much.

Nutt wants to give the public “something to enjoy that is much less harmful.” Lucky for him, that’s something that customers seem to already want: Market research firms say there’s a “moderation movement” going on, evidenced by the growing disinterest of teenagers and young adults.

David Henkes, a senior principal at the market research firm Technomic, told Ad Age in January that the moderation movement is “absolutely impacting beverage alcohol sales” and is “a huge issue for the industry.”

Younger consumers are increasingly aware that drinking alcohol doesn’t come without risk. Nutt is betting that they’ll still want the bubbly feelings of booze but will opt for Alcarelle instead.