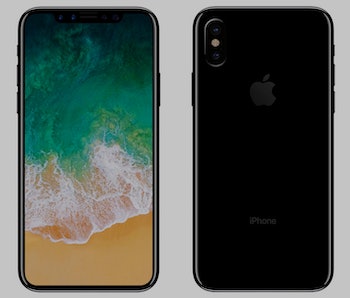 Ever since Steve Jobs introduced the world to the OG iPhone in 2007, the names of Apple’s signature smartphones followed largely numerical order, until last year, when they skipped the neglected number 9 and went straight to the iPhone X. This subversion of naming norms makes deciphering what this year’s trifecta of new iPhones will be called like trying to crack the cryptex from the Da Vinci Code.

While no one can be fully certain what these phones will be called until Tim Cook pulls the curtain back on September 12, one of the heralded devices has been especially elusive. Both the rumored 6.5 and 5.8-inch models might both be dubbed the “iPhone XS Max” and “iPhone XS”, according to the latest.

But while some extremely common rumors have circulated the blogosphere with a fury, there’s not a whiff of consensus about what’s going to be the name of the “entry level” LCD iPhone, which thanks to its lower price could wind up outselling the other two combined, according to one prediction. So what the hell are they going to name this blockbuster?

Budget iPhone Name: Could It Be just “iPhone”?

For the past few weeks, it has been unofficially named the iPhone 9, which would make sense if you believe it’ll pick up where the iPhone 8 left off. But having the iPhone X, which Apple executives call the “Ten”, be older than the iPhone 9 is still pretty confusing.

This has led some analysts to believe that 2018 could be the year that Apple completely reinvents the iPhone’s naming convention.

“Potentially simpler branding coming with no more numbering,” Guggenheim Partners research analyst Robert Cihra commented in a note earlier this year. “After some mismatched mix with the latest iPhone 6 vs. 7 vs. 8 vs. X, we think Apple may use this upcoming cycle to formally change its iPhone naming/branding pattern to now simply start calling the mid-market LCD-based iPhone ‘iPhone’ (no longer numbering them), while keeping the high-end identified by its ‘X.’”

This minimalistic prediction seems to line up with the recent XS theories, but there’s another possibility on the table, “iPhone SE.”

Budget iPhone Name: Could It Be just “iPhone SE 2”?

Developer Guilherme Rambo unearthed snippets of code that suggest the 6.1-inch model could be a revival of the iPhone SE. He claimed that it would come with the Apple A10 processor, the same chip in the 2016 iPhone 7.

The other two handset models are expected to come with an all-new A12 processor, two generations ahead of what Rambo predicts the 6.1-inch model will debut with. If this proves to be true, this budget model would be exceedingly similar to the 2015 iPhone SE, which was launched at $399 emphasizing affordability over specs.

In May, prolific smartphone leaker Evan Blass suggested Apple might call it the “iPhone SE 2018,” which would closely match what it was called earlier in the rumor cycle, the “iPhone SE 2”.

“iPhone 9”, “iPhone SE 2”, and simply “iPhone” are all possibilities, but Apple has been notoriously tight-lipped about names every cycle. September 12 holds the answer we all seek.

Check out some of the other big questions we’re following ahead of next week’s big Apple announcement.