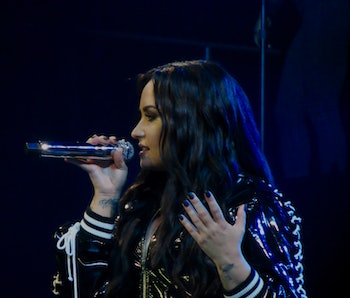 On July 24, singer Demi Lovato was hospitalized after a non-fatal drug overdose. Paramedics gave her the overdose-reversal drug naloxone, and she survived the ordeal and is currently seeking treatment. Lovato’s overdose was initially attributed to heroin, but a TMZ report published Tuesday alleges that the likely culprit was the powerful opioid fentanyl, which came in the form of fake oxycodone pills Lovato had taken.

Her case is just one of an increasing number in which people who buy pharmaceutical drugs on the street end up inadvertently taking unknown combinations of dangerous substances. While Lovato likely thought she was getting a legitimately produced — if illegally sold — pharmaceutical drug, it appears that she actually consumed counterfeit or bootleg pills containing fentanyl, which is much stronger than oxycodone.

“You just don’t have any idea what you’re going to get. You don’t know what’s in it. Anybody can take white powder, press it into pill form, and put a little brand on it,” US Drug Enforcement Administration spokesperson Rusty Payne tells Inverse. This problem, sadly, is nothing new.

Lovato was not alone among celebrities, as sadly illustrated by the fatal overdoses of rapper Lil Peep and Prince due to counterfeit pills containing fentanyl. In recent years, fake Xanax laced with fentanyl had already become such a problem that doctors published a warning about it in the Journal of the American Medical Association in 2016.

And while the incidents involving Lovato, Lil Peep, and Prince are recent, the DEA has documented tainted counterfeit pills for years. In its law enforcement publication, Microgram Bulletin, the DEA documents counterfeit pills as far back as at least 2009. In many of these cases, the pills looked like real pharmaceutical drugs such as Vicodin or Oxycontin but contained anything from melatonin (a natural sleep aid you can buy at a vitamin shop) to heroin.

But today, heroin isn’t very common in counterfeit pills. The one major ingredient that shows up over and over is fentanyl.

“It’s all about the fentanyl now,” says Payne. In addition to being powerful and addictive, there’s one main reason that drug traffickers deal with it: “The profits are insane.” North American traffickers can buy a kilogram — 2.2 pounds — of fentanyl from a Chinese laboratory for between $5,000 and $10,000, then press 1 million one-milligram pills and sell them for $20 each. That’s a 2,000- to 4,000-percent profit. “The profit margins are tremendous,” says Payne.

A one-milligram fentanyl pill is a fairly heavy dose that can be very dangerous to someone who doesn’t have a tolerance.

To a significant degree, Payne explains, the fentanyl trend kicked off in the past few years thanks to the internet. As legitimate pharmacology researchers published their findings on drugs like opioids, stimulants, and synthetic cannabinoids, the internet made it very easy for people all over the world to replicate and mass-produce these substances in illicit labs. With a mechanical pill press, which can be purchased on the internet for anywhere from a few hundred to a few thousand dollars, it isn’t hard to assemble an illicit pharmaceutical lab at home. In the US, pill presses must be registered with the DEA, but sellers get around this by shipping them in a few different packages.

In addition to the profit motives, explains Payne, Mexican drug cartels find fentanyl particularly attractive because they no longer have to worry about the natural limitations of growing poppies to produce heroin, like growing seasons, land area, security for the fields, and so on. Now, they can just buy fentanyl from China.

“These are the same people that they went to for chemicals to make heroin and meth for the past 30, 40 years,” says Payne. The phenomenon of fentanyl-laced pills may be a somewhat recent one, but to Payne it’s the natural progression of events after decades of drug trafficking, and it likely involves the very same players who used to sell the heroin precursor acetic anhydride to Mexican cartels.

Fentanyl is dangerous because it’s so potent, especially for those who have not developed a tolerance for opioids or have recently relapsed into drug use, like Lovato. Those users are especially at risk of overdose. “Just officially turned 6 years sober,” she tweeted in March. “So grateful for another year of joy, health and happiness. It IS possible. 🙏🏼” But then, in June, she expressed that she had relapsed in her song “Sober.”

Regardless of individual tolerance, when it comes to counterfeit pharmaceuticals, it’s impossible to know what you’re getting.

“You’re just playing a game of Russian roulette every time you mess with this stuff,” says Payne.

More like this
Science
6.28.2022 10:00 AM
How are drugs absorbed in the body? The science of medicine, explained
By Tom Anchordoquy and The Conversation
Mind and Body
6.21.2022 10:00 AM
What is hybrid immunity? Two experts explain the mix of vaccination and infection
By Grace C Roberts, Lena Glaser and The Conversation
Mind and Body
6.30.2022 11:00 AM
Male birth control is at our fingertips. Will we ever grasp it?
By Elana Spivack
Related Tags
Share: