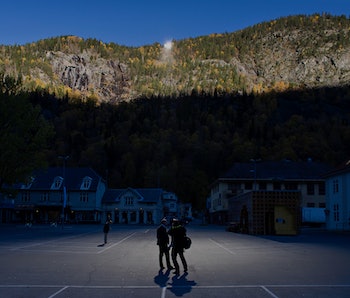 Life without light is a huge, sad, bummer, and there’s only so much a city can take.

If these cities are spending millions on giant mirrors, you shouldn’t feel guilty buying yourself a happy lamp. Darkness affects the mood and stamina of all humans because our biology involved alongside light. As such, light plays a big role in driving our desire to sleep — and in the darkest parts of the world, that drive is intensified.

Two main factors control our circadian rhythm, the internal body clock that determines when you wake up and get sleepy. The first is the body’s level of a molecule called adenosine, which rises while you’re awake until it hits a certain maximum, at which point it starts to decrease, shifting you back toward the need for sleep. The other factor is the amount of light you’re exposed to, which tunes the body’s internal clock. This, in turn, tweaks the body’s timed release of chemical cues, which determine when you start pining for your comforter.

Winter months have fewer hours of sunshine and shorter days because of the way the Earth’s axis is tilted towards the sun. These extra hours of darkness confuse the body because they signal to the brain that it’s time to go to sleep earlier than usual.

When it’s dark, the body releases a hormone called melatonin from the brain’s pineal gland, signaling that it’s time to feel drowsy (for this reason, melatonin supplements are often sold as a sleep aid). Because light impedes the rate of melatonin secretion from the pineal gland, melatonin production increases at night. But during an especially dark winter, the body gets confused, producing melatonin as those 5:30 pm sunsets hit — much earlier than normal. That’s how you end up in sweatpants by seven.

On gloomy days, another melatonin-linked issue arises: Light typically suppresses melatonin production, but when the skies are consistently gray, there’s nothing to override production, so it keeps getting pumped out. This disrupts the body’s circadian rhythms, and the confusion causes daytime sleepiness.

In some instances, it also leads to a case of the SADs — seasonal affective disorder. While some scientists aren’t convinced that SAD is a real thing, there’s a body of published research demonstrating that short days are linked to feelings of sadness and a loss of energy.

While you can’t stop the sun from setting (although, hello Elon, maybe this is something you can work on), there are steps we mortals can take to make these dark days a little less, well, dark. Vitamin D supplements, water intake reminders, aromatherapy, and light boxes all have received votes of confidence from people bummed by the night.

Or, you can just move to Yuma, Arizona, allegedly the sunniest place in the world. In the winter in Yuma there’s a 90 percent chance it will be sunny — which seems a lot better than a happy lamp in a cold apartment.