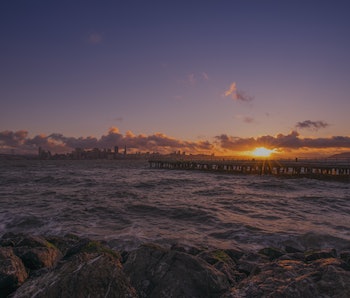 The final days before the end of Daylight Saving Time each October (turn back the clocks an hour at 2 a.m. on Sunday, November 5) are gray reminders that winter is coming.

As we move into the fourth quarter of the year — marked by the Fall Equinox on September 22 — the sun will rise later in the day and set earlier, through Thursday, December 21, the Winter Solstice, when the days get gradually longer again.

Why it’s so dark in the morning is a matter of the Earth’s rotation on its axis (which is at a tilt of 23.5 degrees) around the sun.

Biologically, it’s often very hard to get up in the morning when it’s still dark, thanks to melatonin, the naturally occurring hormone in animals and people that’s produced by your pineal gland in the brain and regulates sleep patterns.

A bright start to your day with sunlight will ensure you have a good night’s sleep later, researchers have found.

“When people are exposed to sunlight or very bright artificial light in the morning, their nocturnal melatonin production occurs sooner, and they enter into sleep more easily at night,” writes researcher M. Nathaniel Mead in “A Bright Spot for Human Health,” a 2008 paper in *Environmental Health Perspectives.”

Mead also reminds us of this fact: Melatonin production by the pineal gland is dependent on the availability of light, so when there’s less sunlight in the winter, melatonin is produced for longer periods, making you sleepier, groggier, and less-awake.

With darker days ahead, it might be time to invest in light therapy, advises the Mayo Clinic, if you want to minimize the amount of melatonin created by your brain, and possibly treat seasonal affective disorder, an emotionally depressive state which occurs during dark winter days. As with many disorders of the brain, causes for SAD aren’t definitive, but researchers theorize it may have to do with increased melatonin, decreased serotonin (a neurotransmitter that can regulate mood, appetite, and sleep), and a adjusting circadian rhythm.

A reminder before we go: The sun rises about two minutes later tomorrow than it did today.

More like this
Science
8.5.2022 1:00 PM
The most miraculous sci-fi movie on Netflix reveals a scientific debate over aging
By Tara Yarlagadda
Innovation
8.12.2022 9:30 AM
Indoor lights make us sick — this technology could fix that
By Miriam Fauzia
Science
8.11.2022 11:00 AM
New Hubble Space Telescope capture and more: Understand the world through 7 images
By Robin Bea
Related Tags
Share: