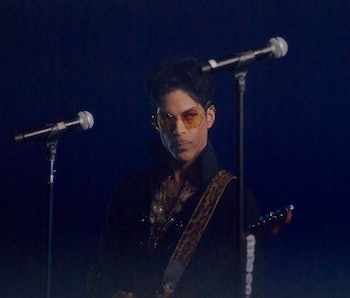 In the year since rock legend Prince died at his Paisley Park mansion, investigators have pointed to a fentanyl overdose as the likely cause of his death. On Tuesday, an autopsy report obtained by the Associated Press showed that fentanyl, an extremely potent synthetic opioid responsible for a rash of deaths across the United States, was indeed responsible.

In the AP report, Dr. Charles McKay, the president of the American College of Medical Toxicology, said that the autopsy report suggests Prince took the drug orally. It likely circulated in his body before he died, McKay said, because there were traces of it in his liver and blood. The concentration of fentanyl in Prince’s blood was 67.9 micrograms per liter. While the drug has no official fatal dose, people have died with three to 58 micrograms per liter in their blood, the report noted. At such high concentrations, fentanyl kills by slowing a person’s breathing to a halt.

Opioids, as a family of molecules, generally work by binding opioid receptors, which mediate the sensation of pain in the brain but also have some serious side effects — most notably, slowing down breathing. Once they bind, users start taking shallower and slower breaths, and at high doses, when the majority of the body’s opioid receptors have bound the opioid molecules, breathing stops completely. This is called respiratory depression.

Fentanyl is so potent that a minuscule amount constitutes a high dose, so it’s especially dangerous to people who have built a tolerance to other opioids and turn to it in hopes of a stronger effect, especially without the guidance of a physician. Part of the fentanyl problem in the U.S. is that many illegal drugs are laced with it, unbeknownst to the user. This lack of transparency makes it troublingly easy for an overdose to occur.

The lab report released after Prince’s death showed that many of the pills in his home contained traces of fentanyl, though it remains unclear where these drugs came from. Accidental fentanyl overdoses have become a big part of the opioid problem in the U.S. in recent years, likely constituting a big part of the 20,000-plus people who died from a synthetic opioid overdose between 2000 and 2016.

As the opioid crisis worsens, it seems unlikely that tragic deaths like that of Prince will become less common. The U.S. is at a policy crossroads. Earlier in March, President Donald Trump called for a doubling down on the draconian War on Drugs, but an increasing number of voices argue that supportive programs meant to prevent addiction in the first place are the more efficient and humane route to take.

More like this
Science
22 hours ago
How does the placebo effect take hold? A doctor explains two influential factors
By Kathryn T. Hall. and The Reader
Innovation
Jan. 16, 2023
3D-printed “organs” could lead to better drugs
By The Conversation and Chengpeng Chen
Science
Jan. 28, 2023
Viruses can speed up atypical brain aging — vaccines may offer peace of mind
By Andrew Bubak, Diego Restrepo, Maria Nagel and The Conversation
LEARN SOMETHING NEW EVERY DAY.
Related Tags
Share: