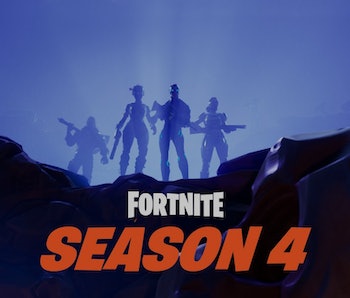 When Epic Games adds a new update to Fortnite, there is an immediate dig through the new game data to find what new content players can expect and any other hidden files that could suggest changes coming to the game. Tuesday’s Season 4 patch included a wealth of new outfits, gliders, and emotes.

Fortnite Intel and the Twitter user account @TwoEpicBuddies found the hidden content in the Season 4 update. The datamined content consists of several new skins, pickaxes, gliders, back blings, and emotes, all with varying levels of rarity.

There are also two max level skins called Omega (black) and Carbide (blue). These outfits are available to Fortnite players who reach tier 100 on their season level.

Datamining for changes to Fortnite not only leads to the discovery of new in-game content, but also future plans for the game. Prior to the end of Season 3, user dug into the last patch release before the new season and found a wealth of hidden data. Specifically, there were several audio clips with “meteor” in the filename. Those sound clips then made their way into the game when meteors started falling from the sky.

Fortnite: Battle Royale Season 4 launched on Tuesday, and made some big changes to the island. The area formerly known as Dusty Depot, is now called Dusty Divot, where a crater now rests. Inside the crater is science station with some loot and scattered around it are crystals that let players experience low gravity, which lets them jump higher for a short period of time.

For those who have the Season 4 Battle Pass, there are two tricky Week 1 Challenges. One requires players to collect the letters “F-O-R-T-N-I-T-E” scattered throughout the map while the other has players on the hunt for a Battle Stars by using a treasure map found in Tomato Town. Epic also added a new emote called Orange Justice inspired by a player known as the “Kid in the Orange Shirt.”