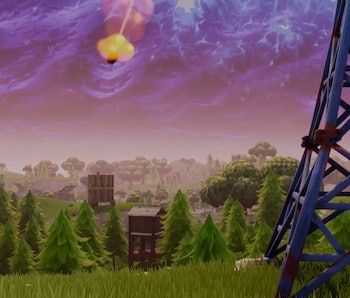 Players on Fortnite saw something in the sky Thursday. It wasn’t a bird or a plane, it was rocks slamming into the ground. The forecast for the game is sunny with a chance of meteors.

After weeks of speculation and conspiracy theories, meteors started falling to the earth in Fortnite Battle Royale Thursday. Players shared their images and videos of the falling objects as they plummet from the sky and hit the ground. When the meteors land, they will destroy structures such as fences in a fiery explosion and leave a piece of metal for players to pick up. There is no determination of where the rocks fall or if it happens in every match.

Theories about falling meteors started at the end of March when a comet appeared in Fortnite Battle Royale. Throughout April, players found additional clues about cosmic activity from telescopes scattered across the island, controller vibrations that were Morse code, and meteor showers in the sky. On Wednesday, the Fortnite Twitter account and Facebook page shared an image similar to an emergency broadcast test pattern. A Twitter user posted their discovery of audio clips hidden within the game data all with the word “meteor” in the title.

Epic Games has kept quiet on the meteor front, but as Fortnite Season 3 comes to an end on April 30, the company could let the season end with a real bang.

Thursday was also the day for the newest Fortnite challenges. Week 10 challenges includes skydiving through floating rings, finding treasure in an undisclosed location, and dealing a lot of headshot damage.