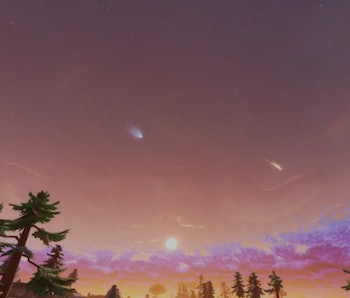 Meteors started flying through the sky in Fortnite Wednesday, and players are going a little crazy in the game. Many wondered what’s going on while a large group of players just decimated a whole section of the island in an almost cult-like behavior.

A theory that began circulating at the end of March suggested Tilted Towers, a section of the island, would be destroyed by a comet on April 18. With the appearance of more meteors in the sky, players took to social media to show the comets fly through the sky. Players on the Fortnite Battle Royale subreddit took it upon themselves to welcome the destruction of Tilted Towers by destroying the section of the island themselves.

Called the Tilted Towers Wake Ceremony, players joined the lower populated Oceania servers, and instead of killing each other like a normal match, they instead banded together to wreck every building in the area, then creating their own structures while dancing. The first instance of this event took place at 6 p.m. Eastern and another is scheduled for 9 p.m. Eastern.

The origins of the theory came from the Fortnite message boards in late March when a comet showed up in the game. A poster suggested Titled Towers would get destroyed by the comet at the end of Season 3 as it’s become an unfavorable part of the island for players. A Reddit user added to the theory by deciphering controller vibrations in the Xbox One and PS4 versions of the game. In Morse Code, the vibrations translated to “SOS D5 418.” The “SOS” is known for being a distress signal with “D5” representing the section on the map where Tilted Tower is located, and “418” means April 18.

Fortnite players continue to destroy the Titled Towers on Wednesday in hopes of something happening. Inverse reached out to Epic Games about the meaning of the meteors, but the representative for the company had no comment.

On Tuesday, a video on The Game Theorists’ YouTube channel analyzed the in-game data to determine the size of the comet and how much damage it could do. As Season 3 comes to an end and Season 4 is just around the corner, it’s becoming more evident that Epic Games has something in store for players.