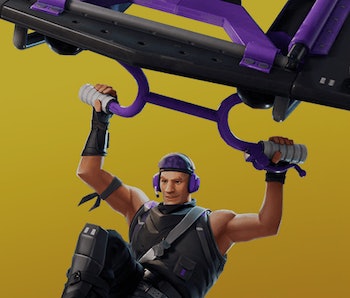 Epic Games took Fortnite down Monday night for some routine maintenance, and after version 3.6 went live, it debuted a hilariously weird kind of sticky grenade that’s bound to get fans excited: The Clinger Grenade.

The Fortnite v3.6 update was released on Tuesday, and with it came the Clinger Grenade, which has a design that mashes together the traditional Fortnite Grenade with a plunger. (You can tell by the strip of energy running along the side of the metallic cannister). The grenade core, however, is round like the Boogie Bomb or even Port-a-Fort. Impossible, this silly object can stick to any surface, including other players.

To be clear, we’ve never seen a sticky grenade quite like this. This type of item is pretty ubiquitous in all sorts of shooters from sci-fi like Halo or realistic franchises like Call of Duty, even the games that go back to WWII. So how does a simple plunger cup give you enough stick to cling to anything? Who cares! Fornite’s never bothered to aim for realism in the best way possible.

The official v3.6 Patch Notes note that the Clinger Grenade is an Uncommon drop that you can find from Floor Loot, Supply Drops, Supply Llamas, Treasure Chests — which is just about everywhere. It does 100 damage to players and 200 to structures, but it’s unclear if there’s any bonus damage for sticking it directly to a player.

That should be the case. In most games, sticking a grenade like this directly to a player usually does far more damage than sticking it near a player. But if it’s only 100 damage and a player can have 100 shield on top of 100 health, then chances are somebody could survive a direct hit. If that is indeed the case, then expect a pretty loud outcry from players, especially after there’s an inevitable Season 4 Challenge requiring Clinger Grenade kills.

Week 10 Challenges kick off on April 26, so maybe we’ll see a Clinger Grenade-related Challenge in Week 1 of Season 4?

The Fortnite v3.6 update is now live, with Season 3 slated to end on April 30.