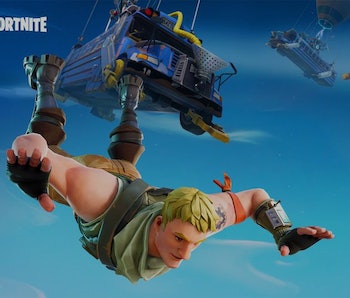 Before the end of Fortnite Season 3, players are literally going to have to jump through hoops to complete their Battle Pass because the latest new Challenge format leaked on Sunday for Week 10 has players “skydive through floating rings.”

Fortnite Tracker announced the leaked Week 10 challenges on Sunday, just like it’s done for many weeks now. Most of them are typical Challenge formats, like searching chests in Fatal Fields and straightforward eliminations, but the most exciting new challenge comes with this skydiving through rings. It’s a mini-game format we’ve all seen countless times before in other games, but obviously we’ve never really seen it manifested before in a battle royale game quite like this.

Here’s the full list of leaked Week 10 Challenges, which tend to be accurate:

If anything, this diving rings challenge is fairly similar to one from Week 3 that had players “Land on different Bullseyes” or even Week 6’s “Summit different Mountains Peaks.” Thankfully, you won’t have to complete this Challenge in a single match like Week 9’s Taco Shops Challenge.

The new week of Challenges rolls out in Fortnite every Thursday morning at 4 a.m. Eastern, so we won’t know for sure how accurate this leaked group of challenges is until then. But either way, Thursday April 26 will kick off the final week of Season 3 before the season ends on April 30. So far, we aren’t even sure if players will get an entire week to blaze through the Week 10 Challenges.

Many of these Week 10 Challenges look fairly straightforward, with “Search between a Stone Circle, Wooden Bridge, and a Red RV” being the only potentially difficult one. By all accounts, it looks like that one might be located near the southwestern-most edge of the Wailing Woods, but that remains to be seen.