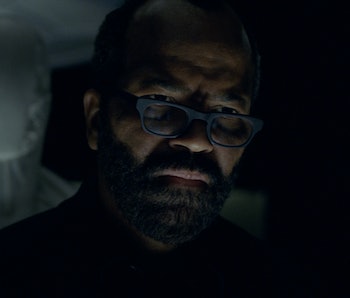 These violent delights have violent ends, but not everyone ends up dead. While the hosts of the theme park in Westworld took over control at the end of Season 1, fans will see a few important, if also unexpected characters who have survived the coup in the upcoming sophomore season premiering April 22.

On Wednesday, Jonathan Nolan and Lisa Joy, the showrunners of HBO’s sci-fi series, told Entertainment Weekly that many key characters survived Dolores’s takeover, which turned out to be Dr. Ford’s final and aptly-titled narrative, “Journey Into Night.” In fact, the only character confirmed dead is Dr. Ford himself, played by Anthony Hopkins, who will not return to reprise his role this season. Instead, fans will see a younger version of Ford played by another actor, meaning we’ll learn more about how he created Westworld, and how it changed him.

In Season 2, fans can expect to see Clementine (Angela Sarafyan), Peter Abernathy (Louis Herthum), Elsie (Shannon Woodward), head of security Stubbs (Luke Hemsworth), Delos executive Charlotte Hale (Tessa Thompson), narrative writer Lee (Simon Quarterman), and of course, the Man in Black, with both Ed Harris and Jimmi Simpson reprising their versions of the same character. In Season 2, the Man in Black is “very much alive” and “has a new mission.”

“He gets a bit of damage done to him, that’s for sure,” Harris teased to EW.

Harris was seen in the first trailer for Season 2, but Simpson’s return was unofficially confirmed back in January. Since another actor is playing a younger Ford, it’s likely Westworld Season 2 will rely on split timelines once again, though it remains to be seen if there will be another big twist that fans on Reddit will solve several weeks before the big reveal.

Fans may also be surprised to see both Elsie and Stubbs back in Season 2. Elsie pretty much disappeared at the end of last season, while Stubbs was cornered by a tribe of Native American hosts. “They’re finally getting to experience Westworld as guests and not in the managerial halls, but I’m not sure they’re enjoying their experience,” Joy told EW.

As for everyone else, like the Delos executives, they’re feeling powerless now that the hosts are running the show. Both Tessa Thompson’s Charlotte Hale and the cocky, arrogant narrative writer Lee are in quite uncomfortable positions given their standings.

“These hosts have always been props to his stories, and now it’s like he’s become a player in one of his own stories,” Lee’s actor Quarterman said. For Charlotte Hale, Joy said she’s “at the mercy of the hosts like everyone else.”