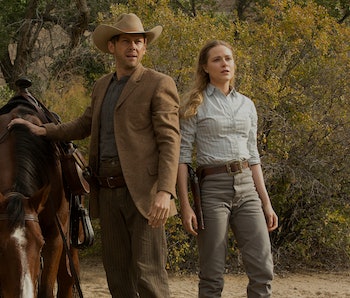 It’s almost time to return to Westworld, and one Season 1 vet is coming back for the trip. Actor Jimmi Simpson, who played William in the freshman season of the science-fiction HBO series, will return in the show’s second season slated to air later this year. Which can only mean one thing: more flashbacks to the early days of the park.

On Tuesday, while promoting his new show Unsolved: The Murders of Tupac and the Notorious B.I.G. at the Television Critics Association, Simpson said that he will “pop in” as William in Season 2 of Westworld. He also “thought it was already a thing,” and added: “But now that you’re asking me, I’m gonna shut up.”

Although Simpson played William, one of the principal characters, in Season 1, the revelation of his character in the season finale ambiguously sealed his fate for future appearances. It’s been more than a year, but what the hey, spoilers for Westworld ahead.

In Westworld Season 1, it was revealed that William was actually a younger version of the mysterious Man in Black, played by Ed Harris. With the show’s nonlinear structure, it was hard to tell that William’s scenes were flashbacks, seen by Evan Rachel Wood’s character Dolores, a lifelike robotic host in the Westworld park who discovers she is an artificial intelligence without free will. Based on the nature of William’s entire presence in the series, Simpson’s return may still be flashbacks or glitches in Dolores’s computer memory.

Much like Game of Thrones, HBO’s Westworld is an ambitious genre production with a lengthy timetable for production. After its red-hot premiere in the fall of 2016, the series spent all of 2017 off the air in order to shoot its second season. Precious little is publicly known about the plot of Season 2, so Simpson’s slip-up that he’ll return is one of the biggest pieces of news to come out of the show’s return scheduled for this spring.

Westworld Season 2 will premiere on HBO in 2018.